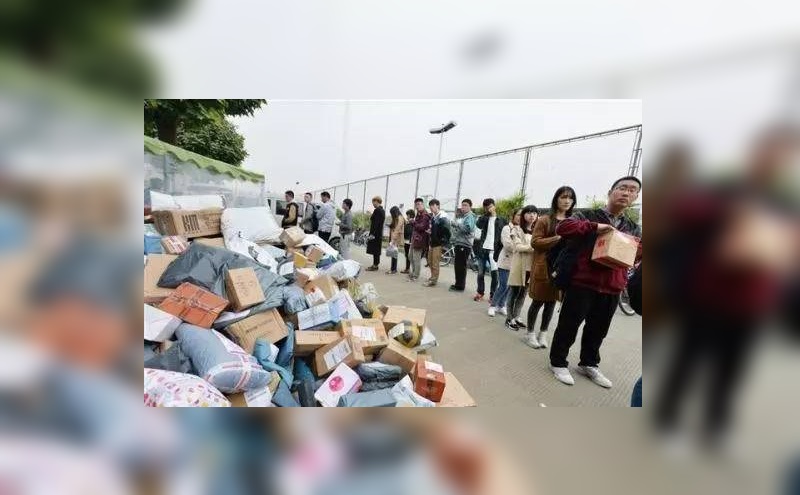 Students lining up to pick up their package. Photo from state-owned Xinhua Net.

The popularity of online payment systems has given rise to a new errand service among university students in China. An errand can vary from delivery delivering mail, packages, food, groceries and hot water to signing in class attendance, doing presentations, writing term papers and taking examinations for fellow students, and the existence of such errand service has raise some heated debate online.

Most university campuses in China are huge and not open to public. The setting creates a distinctive campus-based market. For example, on a cold winter's day, many students do not want to go outdoors for meals, mail or groceries and prefer someone else to run their errands.

In the past, they would ask their fellow students to do them a favor and return the service later on. However, as online payments have entered their lives, many now prefer to hire someone to run their errands instead.

Among the 700 million internet users in China, approximately 60 percent actively used e-commerce and online payments in 2015, with a gross merchandise volume up to 11.8 trillion yuan, or approximately US$1.7 trillion.

University students are the most active user group. In 2015, 6% of the nation’s package deliveries had university campuses as their final destination.

Apart from mobile apps, some students also use chat rooms, such as Tencent’s QQ groups, to provide more controversial services, like signing in class attendance, taking the place of other students in class discussions or presentations, or even taking exams for them.

One survey shows that about half of university students have either hired others to take their place in class or seen others do it. The price varies from 20 to 50 yuan.

News commentators for official media outlets in China have been critical towards this new campus economy in their writings, saying it is the result of students being spoiled and lazy. Some, including news commenter Zu Yuanyuan from the Chinese Communist Youth League-affiliated Youth.cn, have taken a nostalgic view of campus life:

Roommates could walk to the package delivery station together, or ask a friend to do a favor. Buying fruit with fellow students should be an excellent opportunity to share thoughts. Getting hot water for one another is good for building friendship. Yet with the rise of the errand economy, friendship on campus has been ruined by a profitable business — whenever you ask your roommate to pick up a package or buy some fruit for you, you would start to wonder if you should pay for the errand. The errand economy has blocked students from developing friendship on campus and changed the warm campus into a cool campus where everything is evaluated in monetary terms. The errands should be small favors that friends give to one another. Shouldn’t we be worried that our campus is slowly being eroded by monetary value?

On the other side, some netizens see the errand service as a creative business. Here are a few of the comments on one of the news threads on popular social media platform Weibo:

This is good. Time is money. Every one has a different set of values and hold different attitudes towards money. Why should we criticize those kids with rich parents who allow them to spend money? Most of the criticisms are out of envy. Their parents work so hard to make their kids’ lives easy, why judge them? Do you want to see everyone equally poor?

I have to thank those who demand the service of running errands and taking students’ place in class or I could not have survived without a basic income for living.