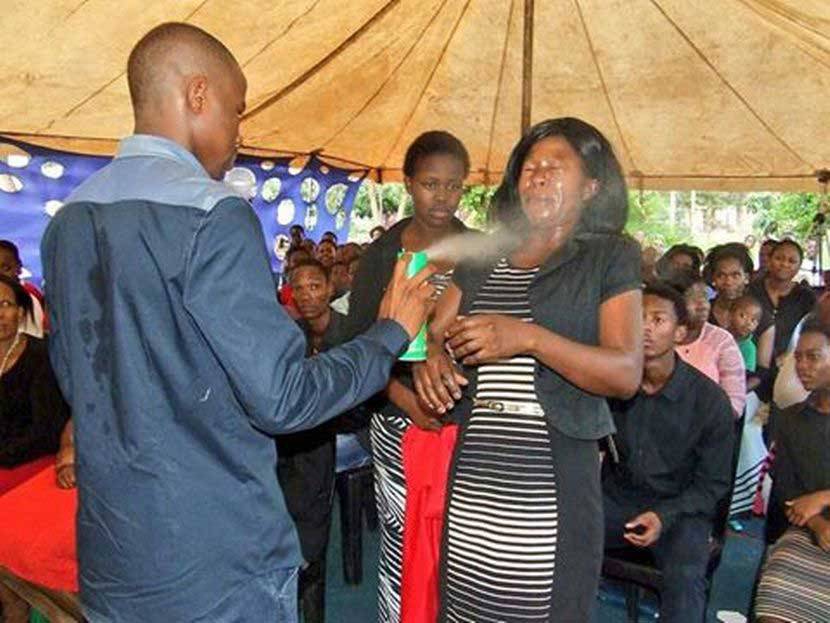 Image shared widely on social media. This one was shared by @Mission316Show.

A self-proclaimed prophet, Lethebo Rabalago, has shocked many South Africans after news broke out that he uses Doom, a popular insecticide in the country, to heal. He sprays the deadly chemical on different parts of the body of his church members including faces.

Announcing the “healing” powers of Doom, Rabalago wrote on his Facebook page:

By my name, you shall drive out demons.
By my name, you shall pick up snakes. Anything you touch, recieves favour because of the annointing upon you. Doom is just a name, but when you speak to it to become a healing product, it does. People get healed and delivered through doom. Its not by might nor by power, but by the HolySpirit. We give God the glory!!

The company behind the insecticide has condemned Rabalago and says it is in the process of contacting him to warn him about dangers of using Doom insect poison onto people's faces.

The Internet has reacted with anger, shock and funny memes using the hashtag #ProphetOfDoom.

Iloveza shared this picture showing empty shelves of Doom in a supermarket:

Mphuma mentioned other strange acts performed by a growing number of self-proclaimed prophets in South Africa:

Just when you said you read it enough, petrol, grass, snakes Pastors etc.. now it's happening again. #ProphetOfDoom world coming to an end.

After this, I think we need a timeout as a country. This is too much and the #prophetofdoom is the last straw. pic.twitter.com/cG4edPGQeH

@shandu009 tweeted a photo of a man trying to increase his wealth at an ATM machine following the preacher's advice:

Doom is the answer brothers and sisters lets bow our heads and sPray. #ProphetOfDoom

Qamatha posted a photo of a mini bus with a Doom advert suggesting that it belongs to the church :

The video below shows the prophet in action:

LOCK HIM UP, and send congregants for psychiatric examination to determine why they stupid enough to follow him #ProphetOfDoom https://t.co/MutzfJtWSJ

Another Twitter user rephrased the Bible verse in the book of John 3:16. The verse reads: “For God loved the world so much that he gave his one and only Son, so that everyone who believes in him will not perish but have eternal life”:

does one see this doom coming or is it a surprise… #doom, #Doompastor, #ProphetofDoom pic.twitter.com/YE6ujSR1Wu

Celeste thought the spraying of the harmful chemical on congregants amounted to attempted murder:

The #ProphetofDoom should be arrested for attempted murder. #Doom is used to kill so surely the #Hawks or #NPA can whip up a charge.

Sorry for the bad handwriting, am writing to ask if Doom can cure TB Joshua. #DoomProphet

TB Joshua is a popular Nigeria preacher who is known for controversial prophecies. During the US elections he predicted that Hillary Clinton would win the election.

Rabalago has claimed that with his spiritual powers it is possible to make a phone call without a sim card or drive a car without fuel.