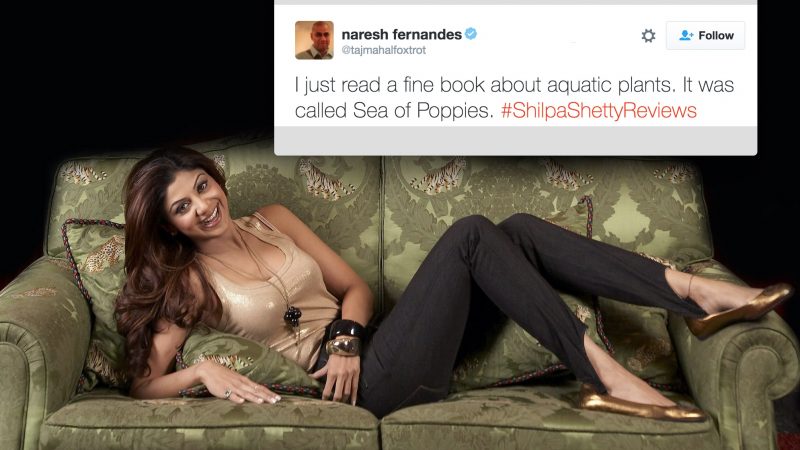 Collage from Flickr image of Shilpa Shetty by Celebrityabc. CC BY 2.0

You might be seeing the hashtag #ShilpaShettyReviews in many tweets by Indians today. It refers to a blunder made by Bollywood actress Shilpa Shetty in an interview, which quickly became viral.

The Twitter trend all began a few days ago when the new curriculum for the Indian School Certificate Examination was released in Lucknow at the 59th annual conference of the Association of Schools for the Indian School Certificate. It was announced at the conference that the syllabus for students of Class 3 to Class 8 will now include graphic novels “Asterix and Tintin”, JK Rowling’s “Harry Potter” series, Agatha Christie’s “Hercule Poirot” series, J. R. R. Tolkien's “The Hobbit”, Satyajit Ray's “Feluda” and Sir Arthur Conan Doyle’s “Sherlock Holmes” stories, among other books. Biographies of APJ Abdul Kalam, Anne Frank and Malala Yousafzai will also be on the reading list.

In an interview to English-language daily Times of India, Bollywood actress Shilpa Shetty wholeheartedly supported the move and said:

Books like Lord Of The Rings (LOTR) and Harry Potter as part of the syllabus is a great move because it cultivates imagination and creativity at a young age. They should include books like Little Women, as it encourages respect towards women at a young age. Even a book like Animal Farm can teach the little ones to love and care for animals.

She obviously mistook that Animal Farm, an allegorical political commentary on the Soviet Union by George Orwell set in a dystopian society, was something good for animals.

The internet broke loose prompting one-liner reviews like the following, all bearing the hashtag #ShilpaShettyReviews, which quickly became a top trending topic:

Oh! I thought David Copperfield is about a boy who works in fields where copper grows. #ShilpaShettyReviews https://t.co/Xwa7H9CaKH

Pride and Prejudice is my favourite book about a group of lions and racism. #ShilpaShettyReviews

Children should read ‘A Tale of Two Cities’, so that they can learn geography. #ShilpaShettyReviews

“Life of pi is an amazing cookbook. Children will love it.” #ShilpaShettyReviews

Children should read The Kite Runner, because only then will they know how dangerous it is to chase kites. #ShilpaShettyReviews

The fault in our stars is the best book for kids to learn astronomy :P #ShilpaShettyReviews

“The Hobbit is good. All children should develop good hobbits.” #ShilpaShettyReviews

And people had more fun reading the innovative tweets:

Is there anyone else who cannot stop reading all #ShilpaShettyReviews?
The things people come up with are just hilarious!

There were also tweets supporting Shetty:

because why blame a paper produced by multiple editors if you can laugh at the woman who probably didn't say the thing? #ShilpaShettyReviews

Dear @TheShilpaShetty, are you sure they have quoted you properly? Because the book #AnimalFarm is not about animal husbandry. #JustChecking pic.twitter.com/abS9byfscF

Thank You Shilpa Shetty for the Gaffe. I have my book bucket list ready now. #ShilpaShettyReviews