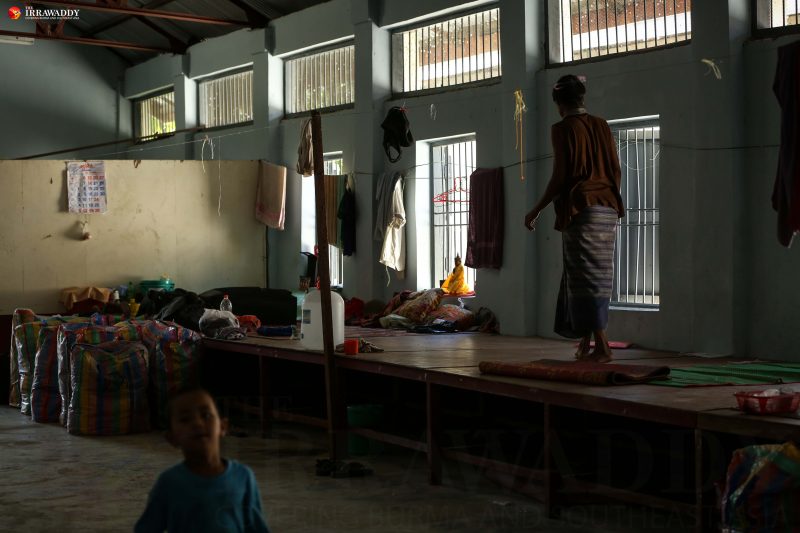 The warehouse of the Relief and Resettlement Department’s Rangoon office in Mayangone Township, where 17 returnees are being provided temporary shelter. Photo and caption by Hein Htet/The Irrawaddy.

This edited article by Tin Htet Paing is from The Irrawaddy, an independent news website in Myanmar, and is republished on Global Voices as part of a content-sharing agreement.

The story tackles the situation of some refugee returnees who are struggling to rebuild their lives back in Myanmar. A military dictatorship has ruled the country from 1962 until 2010, but it was only this year when the military lost total control of the government after its party lost in the elections. During the reign of the junta, a civil war involving state forces and ethnic armed groups intensified across the country, displacing residents and forcing thousands to seek refuge in nearby countries.

The only reason 46-year-old former refugee U Aye Lwin returned to Myanmar was so that his six children could receive a formal education in his home country—the country he left eight years ago due to political turmoil.

After having taken refuge in a camp on the Thai-Myanmar border since 2008, he decided to repatriate once the National League for Democracy-led government took office in April 2016 and welcomed the return of refugees.

U Aye Lwin is one of 17 former refugees who recently returned to Yangon (the country’s biggest city) from the Nu Po camp located on the Thai-Myanmar border, which was established according to an official arrangement by the governments of Thailand and Myanmar, the UN refugee agency (UNHCR), and the International Organization for Migration (IOM).

The first batch of 65 returnees was repatriated to Myanmar via the Myawaddy-Mae Sot Friendship Bridge in late October. Seventeen of them asked to be sent to their homes in Yangon.

U Aye Lwin made up his mind to earn money by doing any kind of job available so that his kids—from his 4-year-old son to his 18-year-old daughter—could go to school.

But his homecoming hasn’t played out how he thought it would.

Since arriving in Yangon in October, the 17 returnees—four families—have only been provided temporary shelter at a warehouse run by the Relief and Resettlement Department’s Yangon office in Mayangone Township, waiting for the regional government to arrange long-term accommodation.

The department, operating under the Ministry of Social Welfare, Relief, and Resettlement, provides 3,000 kyats (US$2.33) to each returnee for daily living expenses. In addition, each family has received 300,000 kyats (US$230) from the Union government, and the Thai government has offered 8,300 baht (US$230) per adult and 6,500 baht (US$180) per child before leaving Thailand.

Daw Khin San Yee, 59, is a former political prisoner and, along with her husband, was a refugee at the Nu Po camp in 2009. Though she was a refugee, she followed news about Myanmar’s democratic transition on the radio and television—the only available news sources in the camp.

I’ve been willing to return to Myanmar since its government transition [last year]. UNHCR and officials from the Myanmar government came to the camp and told us that we could officially register to return home—in dignity. 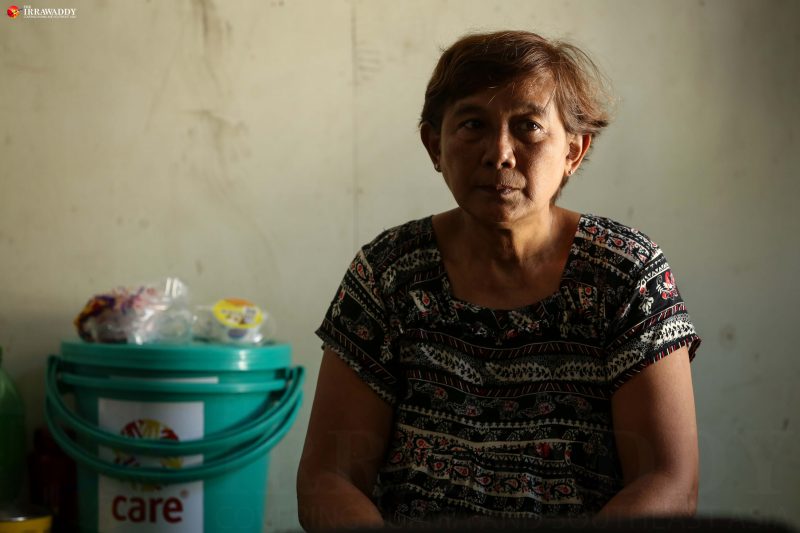 Daw Khin San Yee, 59, is a former political prisoner and was a refugee, along with her husband, at the Nu Po camp in 2009. Photo and caption by Hein Htet/The Irrawaddy.

All four families that The Irrawaddy spoke to last week said that their voluntary returns were driven by the fact that the NLD is in power.

The Yangon regional government provided low-cost housing worth 9.8 million kyats (US$7,400) in the Shwe Linn Ban Industrial Zone in Hlaing Tharyar Township for the former refugees, but asked them to pay for it in installments, paying 30 percent upfront and the rest over eight years.

Still, the families refused to buy the apartments, saying that they couldn’t afford them. The commercial capital’s rental prices for housing have increased nearly three-fold in less than 10 years. Asked if they owned any places in Yangon before they left Myanmar, Daw Khin San Yee and U Aye Lwin told The Irrawaddy that they have never been able to afford to buy apartments and that they previously had to rent places. Daw Khin San Yee explained:

We returned from a refugee camp. We didn’t come back bringing heaps of money. How are we supposed to pay 3 million kyats [US$2,200]?

U Thant Zin Maung, 47, returned home to get traditional medical treatment for his wife, who is unable to walk due to muscle atrophy in her legs. He said he would do any kind of work to afford hospitalizing his wife and sending his two children to school once he gets long-term accommodation for his family.

U Win Shwe, a director at the relief and resettlement department in Yangon, told The Irrawaddy that his department has reported to Yangon’s regional government about the current situation and is waiting to hear back about a possible solution, potentially this week. He said that the government is still struggling to provide affordable housing to illegal squatters in the city.

We can’t provide [free] accommodation to everyone who returns. It’s impossible to do that given that there are also people who are in worse trouble. Myanmar is not rich enough that it can give housing for free. There are also hundreds of thousands of refugees living in border camps, hoping to come back. If Yangon’s government were to provide free housing to returnees, others in the future would also look to return to Yangon, and the situation would get out of hand. They have returned to Burma [as Myanmar is also known] and are no longer refugees. They shouldn’t be given privileges under the title ‘refugee’.

The official also said that each regional government provides for returnees support and rights afforded to every citizen. 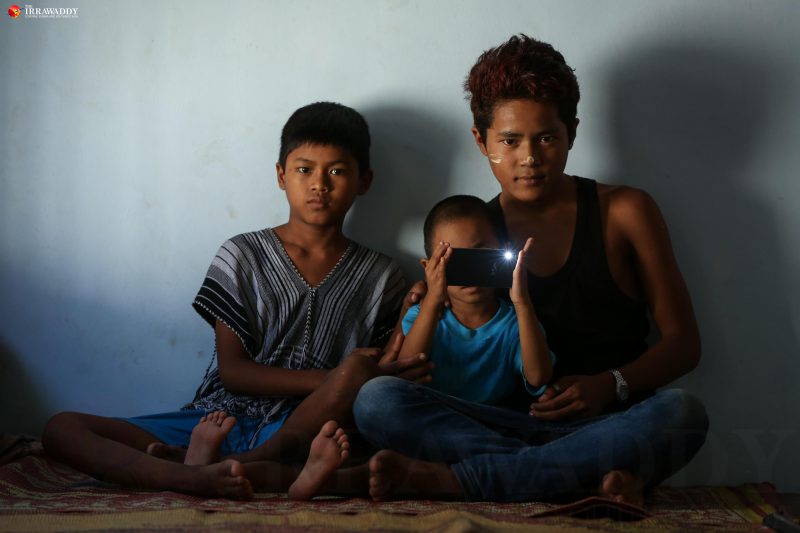 U Soe Aung, permanent secretary and spokesperson of the Ministry of Social Welfare, Relief and Resettlement, told The Irrawaddy that the government is doing as much as it can to support returnees and to find job opportunities for them.

Yangon’s regional minister for social welfare U Naing Ngan Linn visited the temporary shelter after returnees’ arrival in Yangon and told reporters afterward that the government was “responsible” for arranging long-term accommodation for the new arrivals.

Daw Khin San Yee said that returnees are not asking to have the Shwe Linn Ban housing for free, but rather just a place where they can afford start their lives again. Other returnees echoed these words, saying that they don’t want to depend only on donations, that they are ready to work.

U Thant Zin Maung said they now realize situation is very different from their expectations. 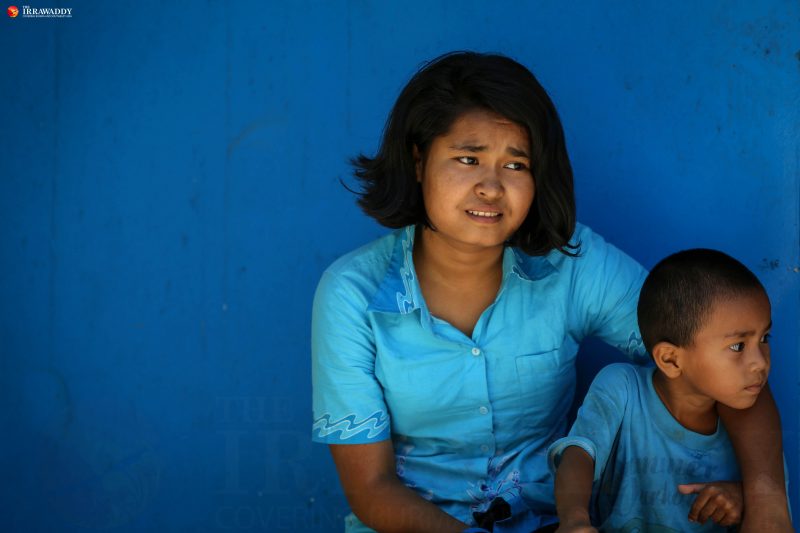 Ma Thiri Suu Kyi, 16, is seen together with her little brother Mg Zin Ko Win. She decided not to continue going to school in Yangon because she’s embarrassed to be in the 7th grade with students much younger than her. Photo and caption by Hein Htet/The Irrawaddy.

Sixteen-year-old Ma Thiri Suu Kyi was fidgeting with her hands, not making eye contact. Sitting in front of a warehouse in Rangoon, she talked about how she used to hang out with her friends in a refugee camp in Thailand.

“I didn’t want to come back to Burma,” she said, adding that she doesn’t know what to do next with her life.

She was 8 years old when she and her father U Aye Lwin left for Thailand in 2008 and barely remembers what Myanmar looked like back then. She was in the 7th grade in the Nu Po camp and thought that she could continue school when she returned to Myanmar. But not anymore.

“It’s not suitable for someone my age to be in 7th grade,” she said. “I have to learn with these small kids, so I don’t want to continue school here,” she continued, pointing to her 10-year-old child brother.