In the Hands of the Azerbaijan Government, Beloved Novel Becomes Nation-Branding Infomercial 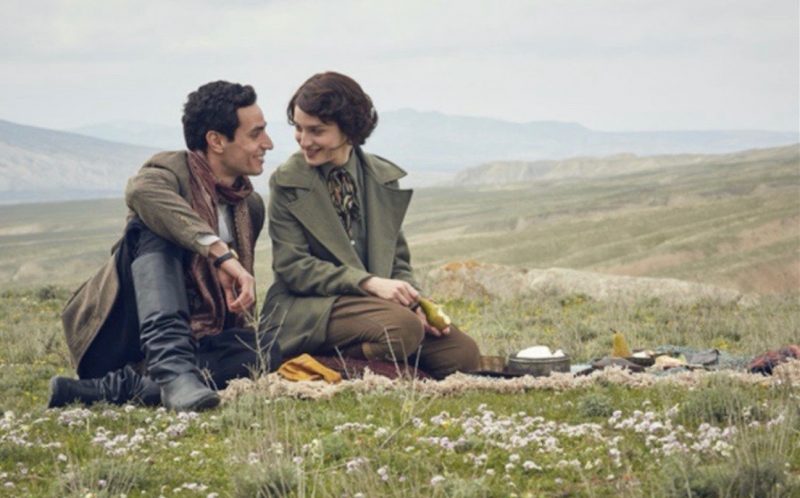 A promotional photo for the film Ali and Nino. (photo: IFC Films).

The following is a partner post from EurasiaNet.org written by Arzu Geybullayeva. Republished with permission.

The novel Ali and Nino has long been beloved both for its affecting cross-cultural love story and for its rich, complex portrait of the Caucasus. But in a new film adaptation of the book – executive produced by the daughter of Azerbaijan's president – much of that complexity is ironed out into a narrative closely tracking the Azerbaijani government's preferred image of itself.

Ali and Nino, written by the pseudonymous Kurban Said and published in 1937, tells the story of the Azeri Muslim Ali and Georgian Christian Nino, who fall in love in Baku during World War I as the Russian empire is falling apart and Azerbaijan is striving for independence.

In the film adaptation, however, several historical elements of the novel – including the role of Russia, Armenians, and Shia Islam – have been distinctly altered. “Despite the correct chronology, the details were manipulated to reflect government sympathies. And this is why it cannot be described as an objective film,” said Altay Goyushev, a historian and prominent public intellectual in Azerbaijan, in an interview with EurasiaNet.

The film was an international production directed by Asif Kapadia, a Briton who won an Oscar in 2016 for his documentary Amy. Ali is played by Adam Bakri, a Palestinian, and Nino by the Spanish Maria Valverde. The Azerbaijani state involvement was clear, however, even if few of its details have been revealed.

Leyla Aliyeva, daughter of president Ilham Aliyev, was the executive producer of the film, which cost a reported $20 million to make. It premiered at the Heydar Aliyev Cultural Center in Baku and First Lady Mehriban Aliyeva – also the head of the Heydar Aliyev Foundation – was among the ruling family members who came to watch the premiere. In a speech after the screening, producer Kris Thykier thanked Leyla Aliyeva, without whom, said Thykier, “this film would have never happened.” Thykier also thanked the Heydar Aliyev Foundation for its help in filming and the Ministry of Culture and Tourism. Azerbaijani officials have been heavily promoting the film on social media, and Azerbaijan's ambassador to the United States Elin Suleymanov spoke at the New York premiere.

The film, accordingly, changed some key parts of the story in ways that better suited Azerbaijan's nation-branding efforts.

Much of the book's dramatic tension provided by is Ali's internal struggle, torn between his love for Azeri tradition and his Muslim warrior roots on the one hand and his love for the European princess Nino on the other.

Early on in the book, for example, Ali’s father gives his son family and marriage advice: “Never forget: you are the master and she lives in your shadow. … If you ever need advice, and she gives it to you, do the exact opposite. That is perhaps the most important thing to know.” Later, Ali takes part in the Shia Muharram festival, which involves self-flagellation; Nino by chance sees him and calls him a “fanatic barbarian.”

These scenes, and anything else with a hint of “barbarism,” were excised from the film.

One of the few times that Azerbaijan is recognized as a Muslim nation in the film is during a scene of political strategizing, when one of the independence activists, Fatali Khan Khoyski, said: “Wouldn't it be wonderful if we could become the first democratic Muslim nation?” Ali agrees, saying they should work to build a “modern, progressive country.” Neither of these lines appears in the book, but both echo Azerbaijan's state branding.

Azerbaijan's relationship with Russia also is treated differently. While the book is critical of the Russian revolution – and as a result was not read in the Soviet Union – Russia is portrayed significantly more negatively in the film. In one early scene, Ali argues that he shouldn't fight for the tsar's army in World War I because “we've grown used to thinking of ourselves as part of Russia, but we're not. They invaded us 100 years ago and took our family's power away. We're an occupied country.” Those lines don't appear in the book. Likewise, the film invents a scene where two of Ali's friends who did join the army are insulted by Russian officers and say that they regret joining.

The book's most significant Armenian character also is portrayed much more one-dimensionally in the film. While he is the villain in both, attempting to kidnap Nino and marry her, in the book he is also an old friend of Ali's and an advocate of cross-cultural ties in the Caucasus. In the film, though, he only insinuates himself into Ali's life in order to steal away Nino, and gratuitously insults Azerbaijan as well: “Nothing comes from the desert.”

The element of the film that has been the greatest source of criticism among Azerbaijan audiences is the way it depicts the Azerbaijani struggle for independence. The movement in which Azerbaijan fought for its independence and where Ali takes up arms was stripped down to a few men roaming around the country, shooting enemies.

The film also exaggerated the role of Khoyski, who became foreign minister after Azerbaijan was declared an independent republic in October 1918. The film incorrectly attributes the famous quote “The flag once raised, will never fall” to Khoyski, which was in reality spoken by Mammad Amin Rasulzadeh, the first and the only president of Democratic Republic of Azerbaijan until its collapse in April 1920. The line doesn't actually appear in the book, but the sidelining of Rasulzadeh is consistent with the current government's ambivalence toward him; his political party, Musavat, was the predecessor to one of Azerbaijan's few opposition parties today and Rasulzadeh is considered a hero to many of Azerbaijan's dissidents.

Upon the film's release Suleymanov, now Baku's ambassador to Washington, tweeted a link to a review of Ali and Nino that he wrote in 2000. In that review, Suleymanov worried that if recommended to someone, “the essence of the book will be overlooked behind today’s stereotypes, the convenient notion that cultures clash rather than coexist.”

The warning proved prescient; for international audiences, the transformation of the book into a sort of infomercial for modern Azerbaijan has resulted in a lackluster reception. Variety described the film as “plot and spectacle, delivered via inexplicably unpoetic English-language dialogue, absent all but the faintest traces of the cultural, gender and historical themes that would have rendered it worth watching.” The Los Angeles Times concluded: “There’s zero chemistry or feeling to this sweeping, predictable endeavor, only the scent of what might have been.”