Exit Castro: The Caribbean Says Goodbye to the Force Behind the Cuban Revolution 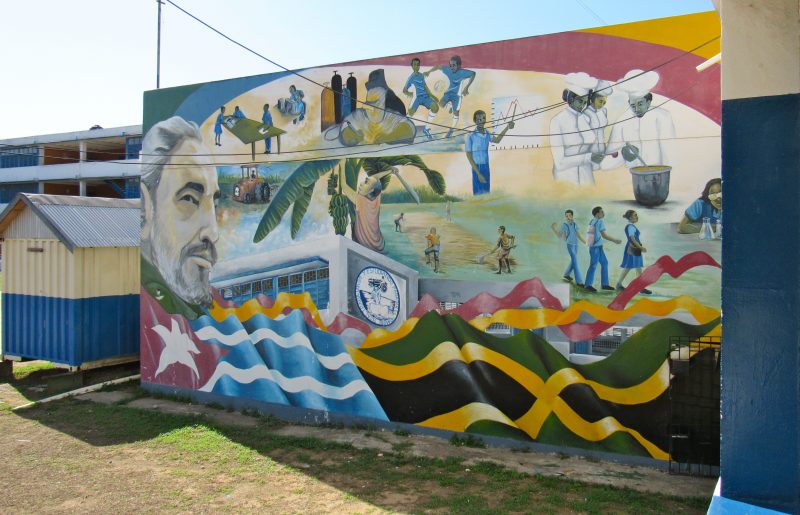 A mural of Fidel Castro at Jose Marti Technical High School in Twickenham Park, St. Catherine, Jamaica. The school was built by the Cubans in 1977. Photo by Emma Lewis, used with permission.

Fidel Castro, the revolutionary who presided over Cuba's political, economic and social path for close to 60 years, died aged 90 on November 25, 2016.

Castro was a behemoth in the regional political landscape, commanding respect from and enjoying good relations with Caribbean leaders over decades, perhaps most notably Grenada's Maurice Bishop, whose left-wing government had been close to Cuba.

Trinidadian activist Tillah Willah paid her respects by posting a photograph of the two leaders: 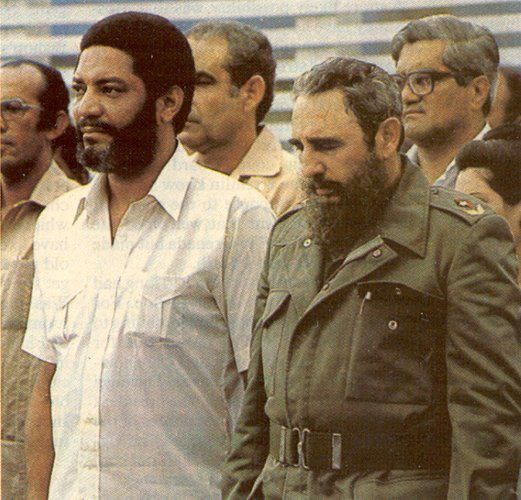 For many social media users across the Caribbean archipelago, Castro was the ultimate maximum leader; a compelling and romantic figure, greatly admired for his stance against the intimidation tactics of the United States (which caused the region to feature quite prominently in the Cold War), his charisma and his electrifying oratory.

In the eyes of much of the region, Castro was also synonymous with standing up against colonialism; Cuba supported the Angolan War of Independence, helped the African National Congress’ struggle against apartheid in South Africa and sent ground troops to battle in the 1983 US-led invasion of Grenada.

The importance of this theme to the territories of the region was not lost on one Jamaican graduate of The University of the West Indies, who tweeted:

One thing Castro (and Manley) got right imo, your country has to be self-sufficient. You must repel neo-colonialism to survive

Self reliance; education; leading from the front&by example, those were the simple qualities that made Fidel such an enduring&successful Ldr

On Facebook, social activist and University of the West Indies lecturer, Gab Souldeya Hosein, summed up the emotions many were feeling:

I can't lie. History weighing heavy on my heart this morning. I mourning the end of an defining era of fierce collective Caribbean hope. I know the work is in our hands. But right now we've lost the strength in our stride and it feels as if every gain in the region is under threat. There must be commitment, courage and struggle, but first there is loss. My generation of activists stays away from the state instead of seizing it for our national sovereignty. We stay the course, but must risk more to go further and build movements that press our mandate forward. We must create the Bishops and the Fidels of our future. We must make ourselves new symbols of autonomy and self determination. But first, before we rise as giants, this is a time for remembering and tears.

Trinidadian actor Michael Cherrie remembered Castro as the “last of the great revolutionaries…defiant survivor in spite of it all”.

@CallTyrone_W Fidel isn't blameless. He took hard stances; most of which were right. But it wasn't free. His people paid for that.

While some Facebook users wished they could be in Cuba to witness this defining moment, others wondered if his death would change much:

Watching Florida news…
A 24 year old American of Cuban descent says he's been waiting his whole life for Castro's death😑
The man was 90 and out of leadership for years.
What impact will his death have on the current global political dynamic?
Time will continue to expose his leadership qualities/demerits.

He was good or bad depending on who you speak to. I fell in love with the romantic portrayal of the Cuban revolution in high school History class. I couldn't express that at home. I later took more details into consideration and lost some of my love for the man while exercising empathy for the many refugees who fled the country to seek more favorable socioeconomic conditions elsewhere. Then I went to Cuba and my love was renewed. There's no human on this planet who gets a perfect score from every other human. What I saw was an education system which works. Healthcare which works. National security which works. We stayed in a rooming house in a ‘ghetto’ in Havana although we could have easily afforded a room in the best hotel, but we wanted to be among the people. I went walking in this ‘ghetto’ after midnight, and the only interactions from locals we attracted were offers to (literally) break bread with us and invitations to come into homes and hang out with them. I dream of a Jamaica close to this. I could also see that it was a synthetic kind of safety born of fear, but I would pick someone being afraid of the repercussions from committing a crime over everyone being afraid of criminals ANY day.
To all the people whose lives he touched negatively, I hope they and their descendants can somehow find the peace he is now incapable of giving them. […]

To all the other Caribbean Government heads, please take a page from his book. One of the good pages. Craft our education and health systems like you ACTUALLY have our interest somewhere in your corrupt hearts. […]
To Fidel, hope you finally find real peace!

Remembering Fidel Castro and speaking about his legacy is no doubt a complicated affair. To much of the English-speaking Caribbean, he was a flawed hero — as one social media user put it, the perfect example of how revolutionaries can morph into the very thing they hate. Castro rose to power in Cuba by challenging the dictatorship of Fulgencio Batista; after nearly 60 years of leadership — totalitarianism, some would say — the Cuban diaspora had no trouble calling Castro a dictator himself.

Please don't pretend to understand what happened on that island. […]

Castro didn't storm in on one side of the island and with a swooping coup d'etat seat himself at a coronation.
It was gradual.
He appealed to the young, poor and uneducated first. With talk of ‘sharing the wealth’ of how ‘the rich didn't need so much’ of how he would make sure everyone was truly equal’. Countryfolk that didn't read or write fell head first for the hype.
He grew his crowds momentum.
Those that opposed were executed, curbside.
When he finally took over, weapons were all removed. His indoctrination or brainwashing literally divided families. He had quiet watchers to see if anyone had too many ‘guests’ and if they called the authorities, on suspicion alone you we're [sic] thrown in jail. […]

We didn't have another uprising because it wasn't just go in and fight. You didn't know exactly who your enemy was. […] He was heavily guarded, heavily protected and although we hate him for the vile things he did – we respected the tenacity. We knew he didn't care who he killed to stay there. We understood there was no benevolence or weakness to attack.

Nobody is my ‘comandante’, whatever my philosophical position on social justice and rights. The caudillismo culture will always remain subject to rejection.
Honouring social and cultural rights does not mean diminishing civil and political rights. It is not a matter of either/or. These things are not binary equations.
Also, not loving someone does not necessarily mean you have to hate them.

In keeping with the culture in the Caribbean, there were some social media users who injected a dash of wit into their commentary. Facebook user Laura Dowrich-Phillips, who was crushed over the deaths of so many international — and regional — icons this year, quipped: “One more month to go 2016, calm yuhself.”

The banter continued, with Justin Phelps adding, “Fidel declares victory and dies of ‘natural causes’.” Other netizens were widely sharing memes and cartoons that summed up Castro's astuteness and longevity: 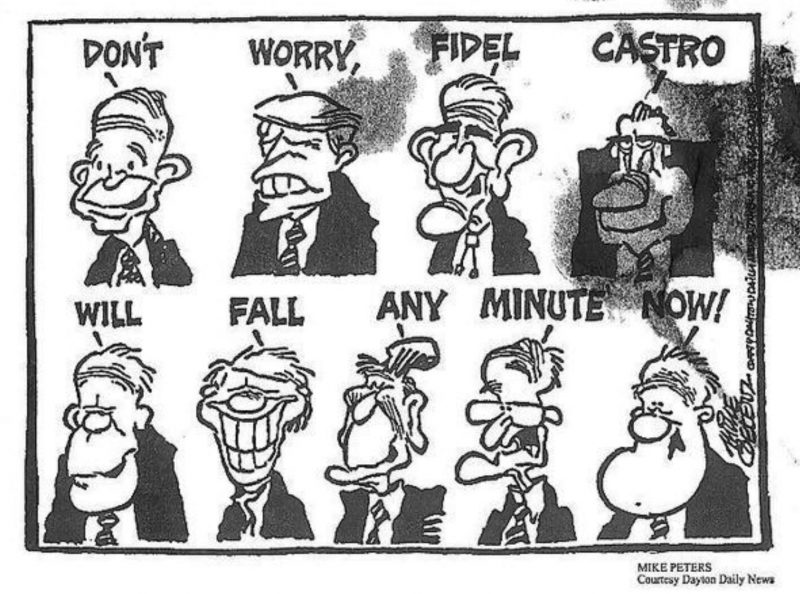 A cartoon by Mike Peters for the Dayton Daily News, widely shared on Facebook. 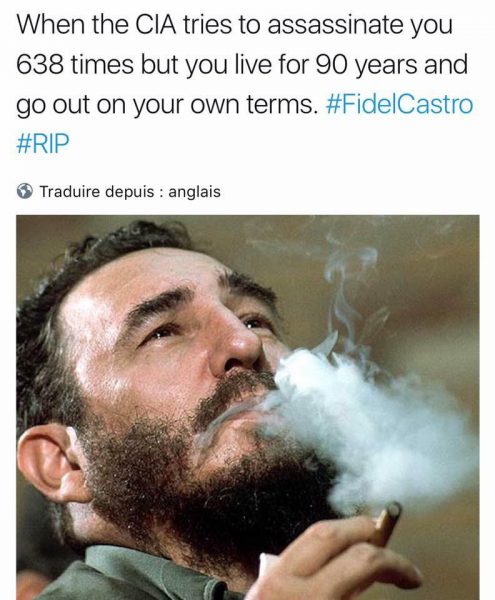 Castro meme that uses a photo by Corbis; widely shared on Facebook.

But mostly, it was a time for reflection. Jamaica-based blogger Annie Paul described Castro's passing as if “a mountain has died and words are inadequate to describe the loss, the Fidel-shaped hole in the universe we must live with now”; while Jamaican entrepreneur and publisher Latoya West-Blackwood tweeted:

2016 feels like the end of an era and the beginning of a new and uncertain future. What a time to be alive.