Kyrgyzstan's President and the Little Personality Cult that Couldn't 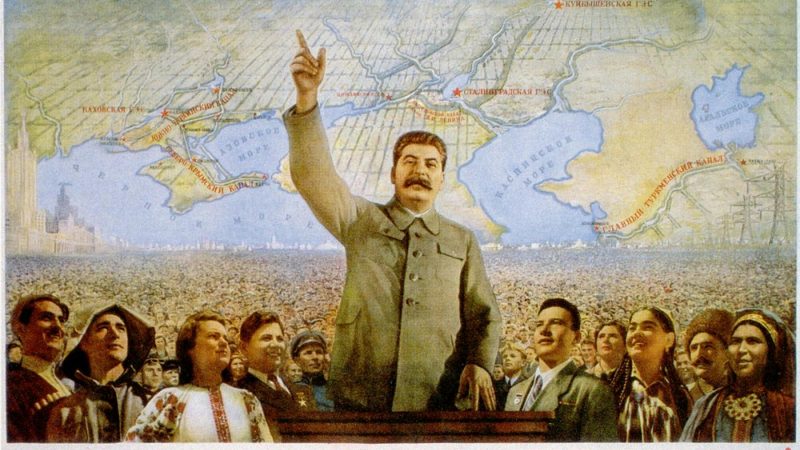 Earlier this month, Kazakhstan's national bank announced that long-ruling President Nursultan Nazarbayev's face would appear on a new-issue banknote worth approximately $30 in local currency. Approximately a week later, legislators in the Central Asian country demanded that the capital presently called Astana be renamed in his honour. While he has so far refused to accept their demand, anyone with even half an eye on Kazakhstan would surely concur that the 77-year-old leader's cult of personality is ticking along quite superbly.

Nazarbayev's neighbour and colleague in Turkmenistan, Gurbanguly Berdymukhamedov, is doing almost as well. Unlike Nazarbayev, he does not have a fancy title like “Father of the Nation”, but that is only because his predecessor Saparmurat Niyazov had already bagged a similar moniker — Turkmenbashy, or “Father of the Turkmen” — before he died of a heart attack in 2006.

Informally known as the ‘protector’ Berdymukhamedov has gone to great pains to ensure Niyazov is not missed, erecting a golden statue of himself on horseback to match those of Niyazov already in place. According to reports, Berdymukhamedov is also preparing to publish a book of national folk wisdom that sounds like a replacement for Niyazov's Ruhnama (‘Book of the Soul’) that was once mandatory reading for all schoolchildren. 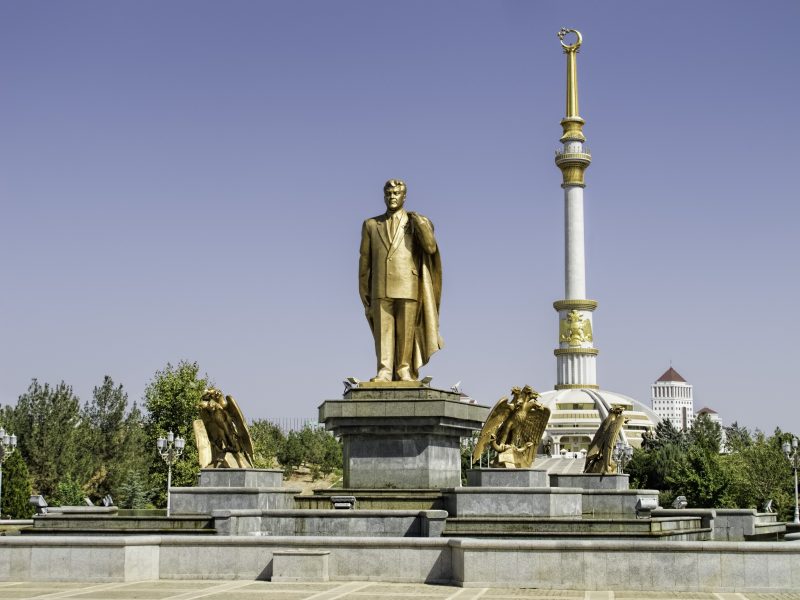 Golden statue in the capital Ashgabat of Turkmenistan's first President Saparmurat Niyazov, who ruled from the late Soviet period until his death in December 2006. Creative commons.

Then there is Tajikistan's President Emomali Rakhmon. His cult of personality had been slow-burning but has progressed very rapidly in the last two years or so, at the same time as everything else from the economy to human rights has hurtled backwards.

Not content with a short, punchy title like his colleagues in Kazakhstan and Turkmenistan, Rakhmon is Tajikistan's “Founder of Peace and Stability, Leader of the Nation”, a status that enables him to run for re-election an unlimited number of times.

He also has his own President's Day, that was celebrated earlier this month for the first time, and there is still the very real possibility that the tallest hydroelectric dam in the world will be named after him, if it is ever built, that is.

But there is one Central Asian leader for whom even modest (by regional standards) attempts at self-promotion result in stern rebukes and no shortage of ridicule. This is Kyrgyzstan's President Almazbek Atambayev, who unlike his colleagues in Kazakhstan, Tajikistan and Turkmenistan is constitutionally bound to a single six-year term in office and must contend with a critical press and civil society that views any attempt to expand his authority with deep suspicion.

Here are three examples where brand Atambayev has faced difficulties in recent times. 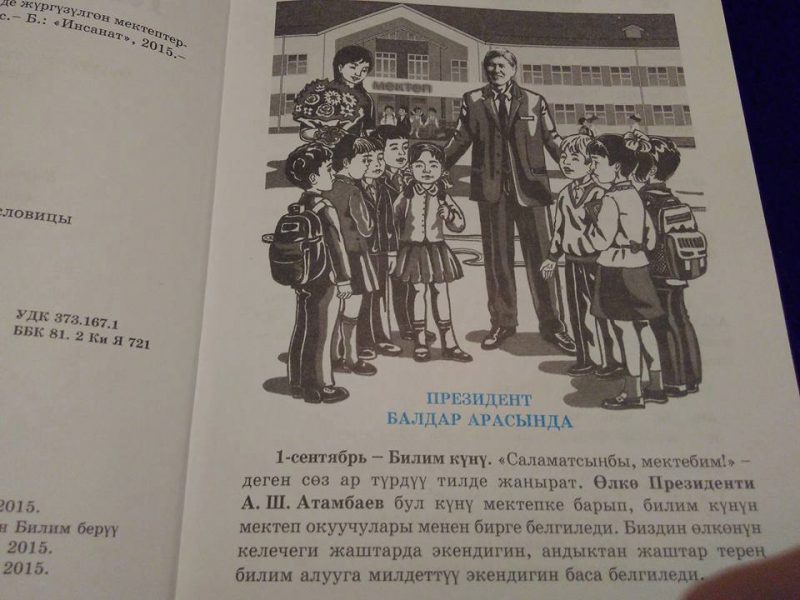 A number of parents of schoolchildren in Kyrgyzstan expressed indignation on social media at the beginning of the school year this year after Atambayev's face and name found its way into a Kyrgyz language textbook for use by fifth graders.

According to Zanoza.kg, the parents were angered mostly by the potential cost to the state budget connected with changing the textbooks for every new president. But Atambayev's political opponents were more worried that the textbook appearance was an indicator of a future cult.

The Insanat publishing house that published the textbook admitted including Atambayev in its product (while not explaing why) and said it could not have done so without the education ministry's permission.

The education ministry, in turn, released a stiff statement that suggested the publishing house had not been open about Atambayev's cameo from the outset:

In signing off on the issue the [ministry] commission discovered the inclusion of a drawing depicting Kyrgyz President Almazbek Atambayev, which, according to commission members, was not in the preliminary draft. Since the withdrawal of this page in the textbook would have led to the destruction of the integrity of the book issue as a whole, the commission was forced to approve the issue.

Where the original suggestion to include Atambayev into the textbooks came from is still unknown.

2. Songs of self praise?

By far Atambayev's best results on the PR-front have come through his music. The 60-year-old president and literature fanatic released this year a series of songs he claims to have written and composed. The thoughtful acoustic numbers with titles like “In Spite of Fate” and “I'm Not Afraid to Die” have been generally well received by the public and are a far cry from the crass, pomp-filled state anthem Forward Only Forward my Dear Turkmenistan reportedly penned by Berdymukhamedov.

But taken as biographical insights the songs add to the general picture of Atambayev as a melancholy and restless leader upon whom political office has weighed particularly heavily, and who critics argue was never up to the task of leading a country that has suffered two revolutions and other political unrest.

On her deathbed at the height of his purges in 1937, Stalin's mother reportedly said she wished her son had continued his religious education and gone on to work as a priest. Atambayev is perhaps another leader that missed his true calling.

While Atambayev has pledged not to hold political office after 2017, there are plenty of signs that he wishes to maintain influence over the country's domestic politics, chiefly through constitutional changes that would empower the present government headed by loyalist Prime Minister Sooronbai Jeenbekov and his Social Democratic Party of Kyrgyzstan. The changes will be put to a vote December 11.

As the country prepares for the constitutional referendum, there has been plenty of mudslinging, with several opponents of the changes being reported as under investigation by anti-corruption authorities answerable to Atambayev.

With battles in the parliament heating up, one opposition leader has even called for the president to be impeached on the grounds that he is operating above and beyond his constitutional mandate.

Atambayev's friend and political ally Isa Omurkulov, however, launched a staunch defence of the president in which he shocked journalists and social commentators by referring to Atambayev as the “guarantor of the constitution” that he is trying to change, and, more importantly “the father of the people.”

The proximity to the titles acquired by lifelong rulers in other Central Asian countries was not lost on Twitter users, who derided Omurkulov.

Atambayev is not the Father of the Nation, but rather its drunken and distant relative.

Atambayev, father of the nation? No, he's some kind of surrogate.

As Atambayev enters the final year of his presidency (elections are likely to take place in October or November next year) it is likely there will be more initiatives coming from the government to ensure his page in future educational textbooks is guaranteed.