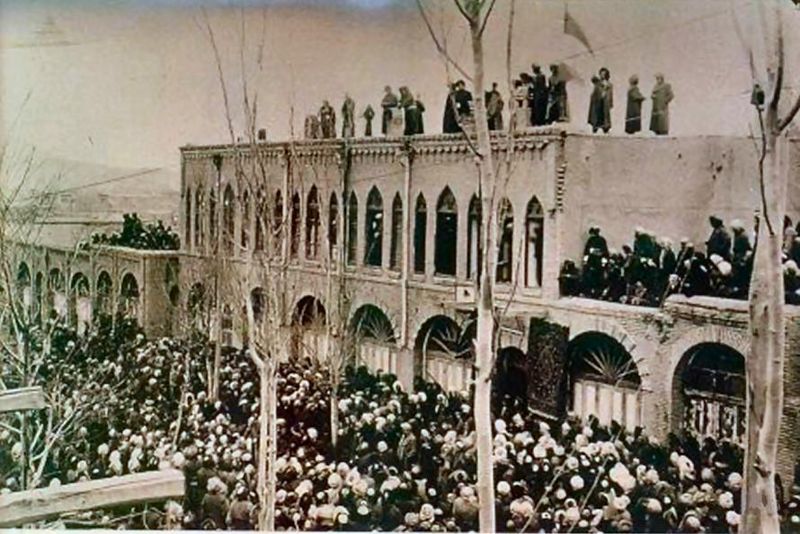 In May 2015, Mahabad, the capital of Iran’s Kurdish region, burned as riots and protests spread following the mysterious death of a young Kurdish woman in the city. Activists claimed [1] that she had fallen to her death from the window of a hotel while escaping an attempted rape by an Iranian security official. The incident garnered international attention and was the focal point for geo-political propaganda battles [2].

The riots in Mahabad were not only indicative of the latent rage among the Kurdish population, but were also a symbolic reminder of the flame that has long burned within the city of Mahabad.

In 1946, Mahabad became the capital of the short-lived independent Kurdish republic [3]. The dream of independence did not last long, and the Republic was soon destroyed by the Shah of Iran in 1947, and the Kurdish leader, Qazi Muhammad [4], hanged for his defiance. 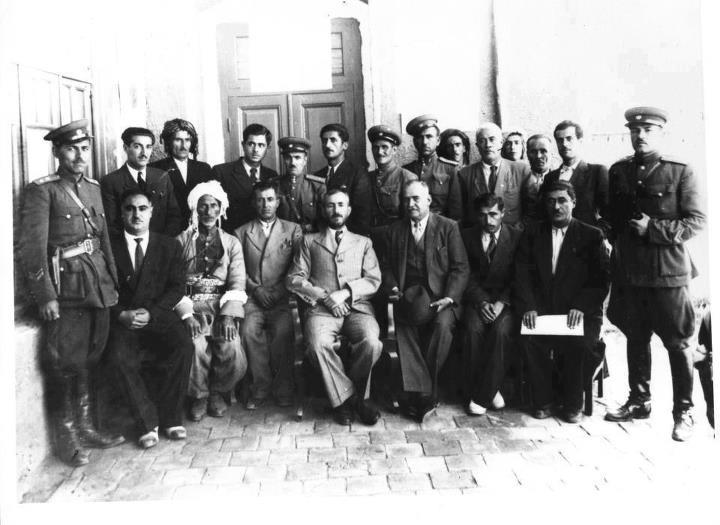 The Kurdish Mahabad Republic was established in 1947. President Qazi Muhammad is in the middle. Photo from Wikimedia Commons, part of the public domain.

Today, Kurdish activists remain targets of the state. Over the years, dozens have been executed [5] for their ties to Kurdish resistance groups. In April 2016, the Iranian Revolutionary Guards Corps clashed with Kurdish militants [6]. Many of those killed were members of the PDKI (Democratic Party of Iranian Kurdistan) [7], the organization founded by Qazi Muhammad in Mahabad in 1945.

The clashes left dozens of both Revolutionary Guards Corps members and Kurdish militants dead, and rekindled the prospect of armed struggle in Iranian Kurdistan. Mohammed Saleh, a PDKI representative in Erbil, Iraq believes that violent confrontation is not a choice but a reality for Iranian Kurds. In an interview conducted by email, Saleh wrote that “Iran's system is a brutal religious dictatorship. We have no choice but to fight back. There is no political arena in Iran's theocratic dictatorship. This is the only way we can fight back. This is our right.”

Despite the short-term alliances between the Kurds and the West, widespread recognition for the rights of Kurds remains uneven, if not completely absent from mainstream discourse. Stories that do make international headlines usually concern the following: Kurdish confrontations with ISIS in Syria, increased Kurdish sovereignty in Iraq, and the nearly 40 years of Kurdish resistance in Turkey.

Why do Iran's Kurds remain in the shadows?

The Kurds of Iran—a 6-million-strong population—remain largely ignored by the international community despite their constant activity and presence.

Ava Homa, an Iranian Kurdish writer and journalist residing in the United States, says the progress made by Kurds, particularly in the Rojava region [8] of northern Syria, is both representative of the potential for positive change in the region and a case study in the hypocrisy of the West.

“Their decisions are profit based, not justice based,” Homa said of Western support for the Kurds in a phone interview. Human rights for Kurds in Iran remains a serious issue, Homa pointed out: “In 2015, 93 people were charged as Moharebeh [enmity against God], 63 of them were Kurds.”

Nor does the Kurdish cause receive much attention within Iran. “A lot of so called Iranian activists and intellectuals do not recognize the national aspirations of Kurds,” said Homa. “For them asking for independence is a crime and not a political choice. There is this preference between land and territorial integrity over humanity.”

For the Kurds in Iran resistance is historically rooted. Though the movement has undergone many shifts and changes, it remains alive today.

Beyond the Iranian government, the geopolitics of the region continue to present new challenges, including from fellow Kurdish parties. In May 2016, a deadly clash [9] between members of the Kurdistan Workers Party (PKK)—primarily in a struggle against the Turkish government—and the PDKI resulted in a number of casualties, threatening to expose serious divisions in Kurdish unity.

The PKK [10]went on record stating that armed struggle in Iran was not to the benefit of Kurds, and encouraged a “focus on civil and cultural movements” instead.

Mohammed Saleh has critiqued this stance for undermining the resistance of Iranian Kurds, and for being largely a reflection of the PKK’s own shifting alliances in the region:

Saleh has also argued that the regional conflicts in Syria and Iraq are both an opportunity and obstacle to the recognition of Kurds as an equal partner in the future of the region:

All the players involved are benefiting in some way, except for the Kurds. And the Kurds are not just fighting for their own stability. But they hope to bring peace to the entire region, and it can be possible because we are inclusive.

The influence of Iranian Kurds in the diaspora

The struggle for change is also on the mind of Iranian Kurds in the diaspora. Samira Ghaderi, an Iranian Kurd and former lobbyist for the Kurdistan Regional Government (KRG) in Washington DC, believes that promoting change is not the sole responsibility of those living in Kurdistan. In a phone interview, Ghaderi said:

I feel responsible for the Kurdish people. Given our unfortunate situation, I think it is the responsibility of every Kurd and every friend of a Kurd to spread awareness about our century long struggle. 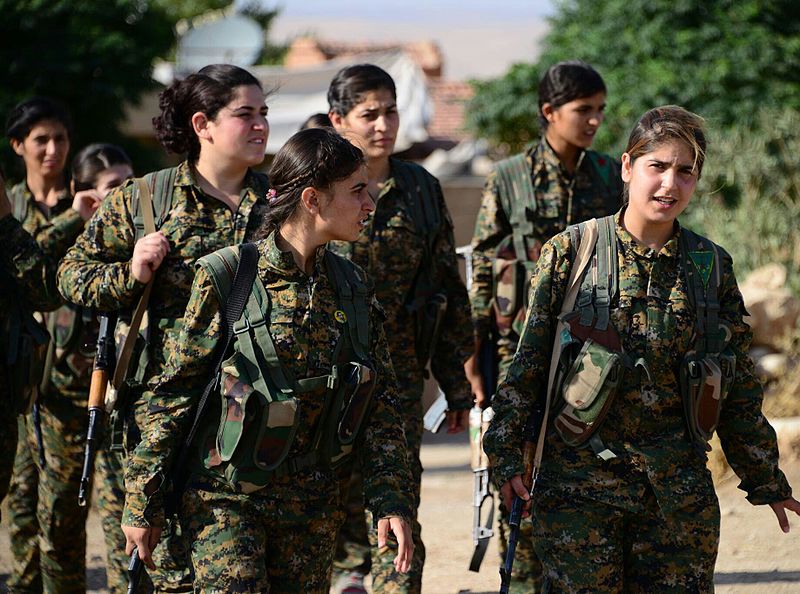 Ghaderi is one of many young Kurds in the United States who have found a sense of empowerment through taking a stand on Kurdish issues and promoting the cause:

As an American-Kurd. I know I have been granted an opportunity that most can only dream of. And I take this very seriously.

It is not a surprise that many of the Kurdish activists, whether in Syria, Iran or abroad, are women. As Ghaderi notes, “Throughout history, Kurdish women have been at the forefront of the struggle.”

According to Ava Homa, Kurdish women have had to overcome racism and repression by the state, patriarchy and chauvinism within Kurdish culture, all the while being exoticized by the West:

Even though the West likes to fetishize the Kurdish women’s struggle, focusing on girls with guns, what is happening in Rojava is really far beyond any of that. This is the first time in Kurdish society, and really any society in the middle east where women have so much power and control. Where they are respected as individuals.

Feminism and the empowerment of ethnic minorities is a central component of what is taking place in Rojava and throughout Kurdistan. It's one of the few positive developments in the face of a horrific regional conflict that has spawned misogynistic and fundamentalist movements.

The question remains whether this type of movement can also take root in Mahabad, and serve to inspire ideas not only ideas about gender equality, but a greater movement for dignity, justice, and perhaps independence for Iran’s Kurds.