Sriracha, a Truly Global Sauce with a Big Heap of Vietnamese Love 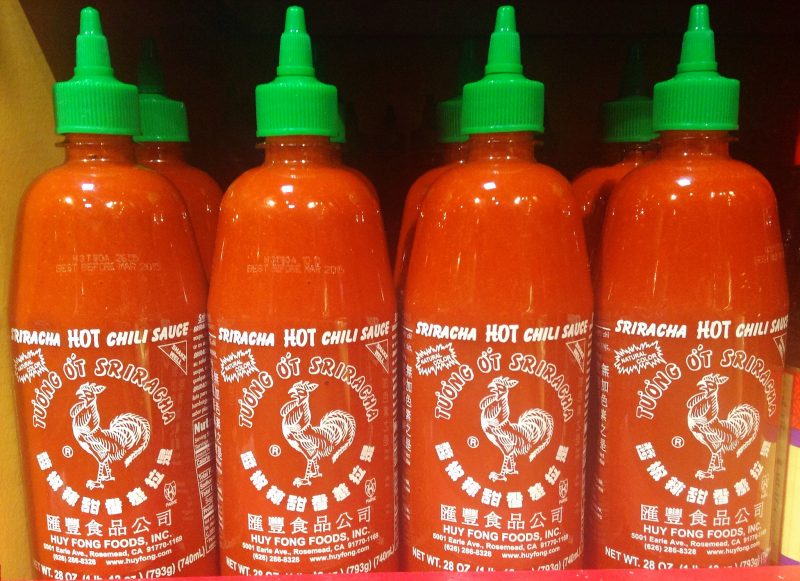 This article by Chí-Linh Đinh is from Loa, an independent news website and podcast that broadcasts stories about Vietnam, and is republished by Global Voices as part of a content-sharing agreement.

I’m at Bánh Mì Boys, a local eatery in Toronto, Canada. It’s late, I’m hungry, and my friend and I order some bánh mì with Sriracha sauce heaped on top.

Sriracha, in case you didn’t already know, is bottled chili sauce, instantly recognizable by its iconic green cap and rooster logo. I use it on everything, and probably on some foods I shouldn’t. For Halloween I dressed up as a bottle of Sriracha sauce. To say I love the stuff is probably an understatement. But I’m not alone.

One of the staff explains why he likes too, even though it is a little different than what he remembers. “I guess, ‘cause I’m from Thailand,” he says. “Sriracha is originally based in Thailand, the small city,” he explains, “But the [sauces] we have is very different from actual Sriracha sauce, like it’s not that spicy but you can put it on everything.”

Many people assume the sauce is an import from Asia. Who knew there was actually a town named Sriracha?

I talked to Griffin Hammond, director of the short documentary titled Sriracha, which covers the history and phenomenon of the rooster sauce.

Yeah in the film we went to Thailand to kind of find out the story of the original. The sauce, I don’t know what it’s like in Vietnam, but in Thailand it was much runnier, a lot sweeter, and different consistency and kind of seemed like it went with different things too—similar ingredients, of course.

Hammond explains more of the backstory of the modern Sriracha, which starts with David Trần, and his voyage to the United States:

He was in Vietnam and he one of the many ethnically Chinese people that were sent out out of country, kinda pushed out of Vietnam after the war, and he was asked to get on a boat, called the Huey Fong.

Huy Fong Foods, incidentally, is what David Trần would later name his company.

There were 3,300 refugees on this boat, and finally after a month of living on this boat, Hong Kong relented, let them stay there for a little bit, and the UN relocated all these people and I think a large number them landed in the US.

David Trần, at the time without a dollar to his name, first arrived in Boston, but eventually made his way to Los Angeles.

When he was there, he was looking for a job and couldn’t really find anything he liked, but saw that a lot of Vietnamese people that wanted—they were eating phở and they didn’t have any hot sauce, like that from back home, and he just saw a market there and thought, ‘I could make some hot sauce,’ and that’s how he started making Sriracha.

The little business Trần created back in 1980 has now flourished and expanded.

There’s currently a large factory in Irwindale, east of Los Angeles, making the world’s supply of everyone’s favorite hot sauce. In fact, if you so wanted, you could go there and book a tour and check it out yourself.

Sriracha’s origin is getting harder to keep straight. Let’s recap: We have a Chinese-Vietnamese refugee who only started selling the sauce when he came to the United States. The sauce itself is inspired by Thailand’s Sriracha sauce, but it’s not the same taste, not exactly.

So maybe…Sriracha is kind of a toss up between all the cultures? A true fusion food?

It’s an intriguing thought, and it makes sense at a global level, especially since ideas and foods travel across borders. And the neat thing about globalization is this—even though David Trần never sold Sriracha in Vietnam, it is rapidly becoming a favorite back across the pond anyway.

Victor Nguyễn, who does business in Asia, explains,

So I go back to Vietnam —I go to Asia maybe like once or twice a year on my schedule, and in the last few years, I’ve noticed that, whenever I post a message on Facebook or maybe like email my friends asking them if they want anything from California, or from LA, the number one answer is Sriracha sauce. This past trip, where I went in September, my entire check-in luggage was all Sriracha sauce. It was all literally, I think, I had about 15 bottles in my luggage.

15 bottles is definitely no joke. In the end, this mashup of cultures makes Sriracha a truly global sauce with a big heap of Vietnamese love. And what’s better than that?

But anyway, where were we? Ah that’s right, I was enjoying my bánh mì. With Sriracha, of course. But in that case, I might as well ask the burning question: “What’s your favourite thing to put Sriracha on?”

Hey, that sounds pretty good. But I think it’s time to stop hassling the staff now. The place is picking up their dinner crowd.

Listen to the podcast about Sriracha: