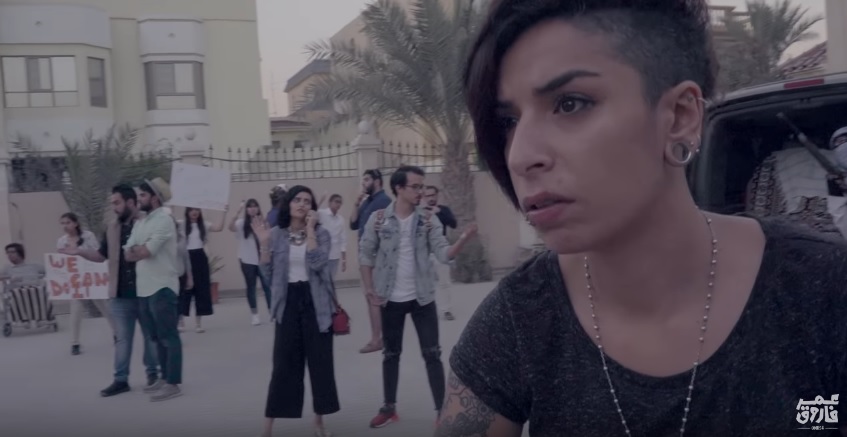 A screenshot of the Bahrain mannequin challenge.

Omar Farooq, a Bahraini filmmaker and activist, has given the Mannequin Challenge a creative twist to question stereotypes in Bahrain.

The Mannequin Challenge, which has participants freeze while music plays in the background and the camera travels around the room, has taken social media by storm. The American broadcaster NPR reported that “it all started with this video from user @pvrity___ where a group of high school friends from Edward H. White High School in Jacksonville, Fla., created the first video.”

In this Bahraini version, however, Farooq chose to spotlight the voice of each character as a way to criticize his society.

The video starts with a ‘warning’ which reads:

In this clip, we do not mean one section [of society]. We mean all of you, all of society.

And then Farooq asks the question, “How does society think?”

The following is what is said by each character:

Man in a khaki shirt: Heh, you are thinking Masha Allah! Do you want me to tell you how?
Man reading newspaper: The youth of today are petty. May Allah prevent calamities.
Three women wearing the hijab: All of them? Your problem is that you love to generalize.
Man with green wristband: Why are you talking about people who wear the turban [worn by Shia Muslim clerics]? Do not offend those who wear turban, you sectarians!
Man with the agal [a sort of black headband]: What did you mean, ‘us'? You're the sectarians!
Cool girl: This how society thinks. This is why I am detached from you.
ISIS (also known as Daesh or ISIL) sympathizer: Your fates are in hell. The banner of Allah endures.
Man with eyeglasses: Avoid conflict everyone! This is precisely what the West wants us to do.
Man with Nirvana shirt: Conflict? May Allah have mercy on Saddam [usually said by someone who supports Saddam Hussein].
Other man: What? May God put you together in the afterlife [an expression that means ‘May God punish you’]
Anglophones: Whatever. Guys, it’s not even that important.
Man on bicycle: You're ignorant! Speak Arabic!
Man in blue: No one is ignorant but the governments.
Other man: Governments and rules are crowns over your heads, you traitors!
Man with the agal with the man in a suit: Iran is the reason for everything that happens to us.
Man sitting: We are here. We can defend ourselves even with fighting.
Other man: Do you know that hatred causes violence? I wish you loved one another more.
Two men sitting: Love one another? You're obviously talking about gay marriage.
Two men: This is a product of the vindictive Masonic media.
Other man: What does Masonic mean?
Man in red: [in a mocking tone] Ma-Sony or Ma-Apple?
Man with iPhone: Apple is the brainchild of one person who changed the world. What have you done?
Women protesting: Are you saying that girls don’t have any role in the society?
Condescending man: I wish I could see protesting every day!
Poor man sitting: Why is it so? Why do they have everything while I don’t even have enough food to feed myself.
Man in wheelchair: Thank God. At least you can walk.

In an interview with Saudi news channel Al-Arabiya, Farooq said the idea was originally to make a film, but when he saw the Mannequin Challenge trending online, he decided to take advantage of it:

Bahraini YouTuber Omar Farook reveals the purpose behind his video.

When asked about an important point and message from the video, Farooq referenced a popular uprising that began in Bahrain five years ago. That movement suffered a brutal crackdown at the hands of authorities:

As Bahrainis, we witnessed a crisis in 2011. I think that the conflict between Sunnis and Shiites must be stopped. There are still people who use sectarian jokes that might provoke discord in society and hatred among the people.

The video has reached more than 263,000 views since it was uploaded.