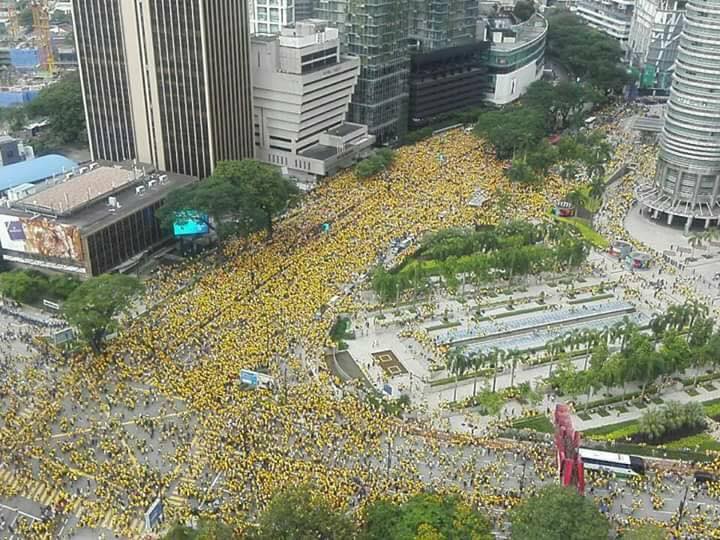 More than 10,000 protesters joined the Bersih rally in Malaysia calling for the resignation of the prime minister. Photo from the Facebook page of Bersih.

Malaysian activists and supporters of the Bersih movement (‘Bersih’ is a Bahasa word for clean or reform) have been organizing symbolic protest actions in the last few days to demand the release of Bersih chairperson Maria Chin Abdullah.

Maria Chin was arrested last November 18, a day before Bersih was scheduled to hold massive rallies across the country to demand the resignation of Prime Minister Najib Razak, who is facing numerous corruption scandals. Bersih succeeded in peacefully mobilizing more than 10,000 people on November 19.

Police arrested Maria Chin for allegedly violating Security Offences (Special Measures) Act 2012 (SOSMA), also known as the anti-terror law. Under section 4(5) of Sosma, a suspect can be detained for up to 28 days without trial. Maria Chin is being investigated for committing activities deemed “detrimental to parliamentary democracy.”

Bersih leaders claimed the arrest was meant to undermine the scheduled protest and sow fear among the population.

This is the fifth time that a Bersih protest was organized in Malaysia. The movement was first launched in 2007 to demand free and fair elections in the country, where the ruling party has been in power since the 1950s. In recent years, the election reform campaign was broadened to include the demand for a clean and transparent government, as well as the protection of civil liberties.

Since last year, Bersih has been calling for the resignation of Najib, who has been implicated in several corruption cases.

After the peaceful protest last Saturday, many groups demanded the immediate release of Maria Chin by reminding authorities that the Bersih leader is an activist, patriot and democracy-loving citizen who doesn’t deserve to be jailed and treated like a terrorist.

Activists are using the hashtags #BebasMaria (Free Maria) and #MansuhSOSMA (Repeal SOSMA) to spread information about the campaign.

We all miss her dearly. Pls continue joining the vigils & sign the petition to free her at: https://t.co/3KhcuNRYlE#BebasMaria #MansuhSOSMA pic.twitter.com/M5v2wGT9bF

Some members of the Parliament marched outside federal police headquarters to denounce the harassment and detention of opposition leaders:

Opposition MPs march to police HQ from Parliament wanting an end to “harassment” of MPs. Also calling for release of @bersih2‘s @mariachin pic.twitter.com/YFrV1geYJb

Vigils and solidarity actions were held in many parts of Malaysia in support of Maria Chin:

I wasn't there tonight but so many more were for #bebasmaria God bless them. pic.twitter.com/KcpdoWJfeN

#women4maria it is never about just one person. When u lockup 1 person, the rest of us rise up #BebasMaria #MansuhSosma pic.twitter.com/yNJIretJry

Maria Chin’s children penned a letter about the detention of their mother:

Is this the type of country that we Malaysians want to live in, where corruption runs amok, elections are rigged and innocents are placed behind bars?

People like our parents, who are willing to speak up against corruption do not do it for their own sake, but for the sake of the future generations.

This cartoon by Zunar reflects the sentiment of many Bersih supporters about the detention of Maria Chin and the lack of accountability for officials involved in fund anomalies: