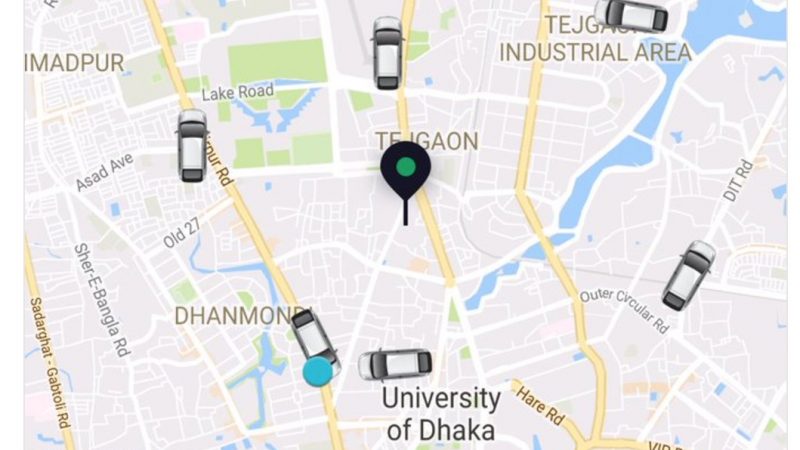 Screenshot of a Uber map. Via Mujtaba Morshed

Dhaka, the capital of Bangladesh, is one of the most populated cities of the world. It is known for its lack of effective public transport and notorious traffic jams. The existing taxi services are inadequate and unreliable. So it is not surprising that the launch of Uber taxi service has been hailed by many.

Uber, the American multinational online transportation network company with headquarters in San Francisco, has its presence in 450 cities around the world. In Dhaka, finding a cab is one of the toughest jobs and call-in taxi services are rarely available. With Uber, passengers can easily hail a cab via its visual app on mobile phones and then get picked up. Passengers can rate the service or behaviour of the driver and similarly a driver can rate a passenger. Uber in Bangladesh accepts cash payment at the end of the trip. A similar local service called Chalo launched last year, but it failed to make much of an impact.

So @Uber_BD launched in Bangladesh today and this is impressive. Having said that, also one of the most upscale neighborhoods in town. pic.twitter.com/GwuapsrkHe

Folks with 2+ cars complaining about how #Uber will make the already #hotmess of a #DhakaTraffic worse.#smh #Dhaka #traffic #UberInDhaka

Uber has about 300 cars running in Dhaka and everyday more cars are being added.

Bakhtiyar Ashraful is excited about Uber in Dhaka:

What an uber surprise! This is going to help our city.

Uber has taken a massive challenge launching the service in Dhaka. Kudos to them. Hope they succeed.

Uber claims that the service will reduce traffic congestion in the city. But Solaiman Sukhon do not agree to that:

Uber does not fly!!
In the epic traffic jam of Dhaka, CNG Auto, Paddle Rickshaw and Uber are all the same.

Rezaur Rahman thinks that car pooling is the solution for the traffic jam problem in Dhaka:

I don't really understand why there is such excitement about Uber entering the Bangladesh market when it has been fully or partially banned in cities across the US, Japan, Germany, France, the Netherlands, Australia etc. for its subversion of labor laws, flouting of licensing regulations, competition and consumer laws and exposing passengers to sexual assault. Don't be seduced by the brand name or the ‘ease’ of mobility it supposedly offers.

There are other concerns whether Uber will be successful in Bangladesh. But only time will tell as people badly need a better and reliable taxi service in Dhaka.