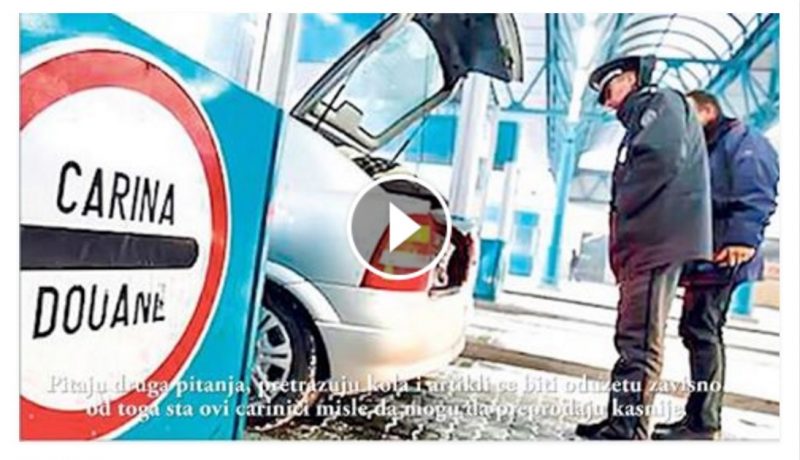 A screenshot from the video “My Macedonian Ordeal” by Rick Ray.

American filmmaker Rick Ray posted a video online titled “My Macedonian Ordeal” (or “My Macedonian Arrest,” depending on the platform) accusing Macedonian customs officers of systemic corruption. The video went viral in Macedonia, with the Facebook version getting over 52,000 views and over 700 shares in less than two days.

Ray alleges that while traveling from Greece towards Germany by car, several customs officers at the Medžitlija border crossing mistreated him in order to confiscate a drone he uses in his film work. In the lengthy documentary-style video he uploaded, he describes his two-day misadventure, claiming that the whole system is corrupt — the customs officers target travelers for their goods and then resell what they confiscate, and government officials look the other way because those detained are forced by the court to pay a penalty for their “crime.”

Ray himself says he was made to pay a 500-euro fine, which he describes as a legal “bribe” meant to pad the Macedonian state's coffers.

The video seems well researched, and also features subtitles in Serbian, which increases its accessibility among Macedonian citizens, who are generally familiar with that language.

While Macedonia had adopted strict regulations about drone flying in 2015, local media report that importing drones for personal use by foreign nationals is not forbidden in Macedonia if they have capacity to fly up to 150 meters in height and in a radius of 400 meters. A license by the Civil Aviation Agency is required for higher capacity drones.

After the video vent viral on November 22, several Macedonian media reached out to the customs authority asking about the case. Some did not receive any response, while Radio MOF reported that customs answered that they have no immediate knowledge of the case, but shall investigate and get back to them.

A day later, on November 23, the customs authority issued an official denial, claiming the video contains untruths intended to damage their reputation as well as “the reputation of other institutions and the whole legal system,” and that the equipment was legally impounded because he did not declare it in the first place. (In the video, Ray says he was never given a chance to declare his drone.)

The customs authority further said Ray could had found recourse in using the legal means available to him, such as submitting a complaint to a second degree government committee or addressing the Administrative Court or the Higher Administrative Court:

The fact that the person R.R. decided not to use the legal mechanisms, but makes allegations about supposed statements told to him or heard from someone, indicates that the video is tendentious and with a political background. Furthermore, making videos at border crossings without permission by the competent customs or police official is forbidden, because such object is of strategic importance to country's safety.

In the video, Ray also comments on the wastefulness of spending Macedonian taxpayer money on Soviet-style monuments as part of the Skopje 2014 development project. He also highlights the anti-corruption protests called the Colorful Revolution, which splashed some of these constructions with paint.

Allegations from Ray's video are in sync with local perceptions of the omnipresence of corruption and exploitation. Corruption among customs officials is even part of the urban folklore in the Balkans. There are numerous jokes referring to it, such as the following:

A customs officer had a birthday coming. His colleagues gather to decide on a gift.
– How about we buy him a car?
– That would be embarrassing, he already has five!
– How about we get him a condo?
– No, man! It's too little.
– Hey, I got it! How about we leave him alone to work a double shift tomorrow?

Macedonia has a score of 45/100 on the Transparency International Corruption Perception Index, where 0 means highly corrupt and 100 means very clean.