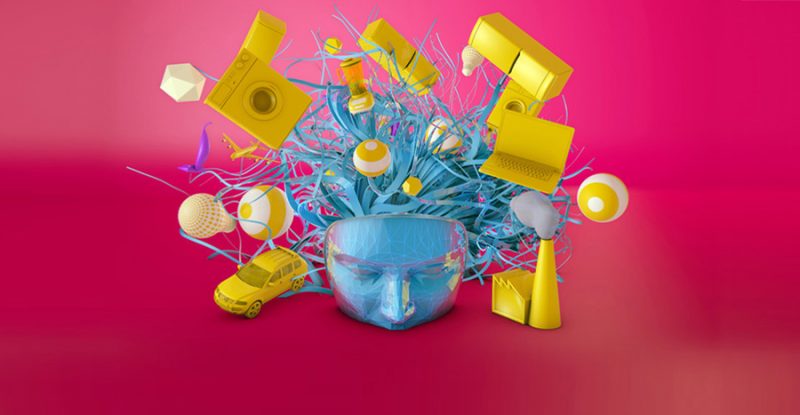 Academics and other members of Melbourne's Fifth Estate gathered at the Networked Society Symposium on 11 November 2016 to address challenges, opportunities and threats the global digital environment. The symposium showcased a diverse range of projects of the Melbourne University’s Networked Society Institute. The vibrant local digital landscape was a feature common to many of the initiatives explored.

In the keynote address, Michigan State University's William H. Dutton put forth his theory of the Internet as a “fifth estate”:

the use of the Internet and related technologies in shaping an emerging Fifth Estate, composed of networked individuals able to use the Internet strategically to hold institutions, and other estates and of the Internet realm more accountable

Dutton sees this conception as a major development from some earlier notions of a fifth estate as being equivalent to bloggers.

He outlined the changing power shifts arising from the democratising capacities of the Internet. Uprisings in the Middle East, Ukraine, Venezuela and beyond have illustrated the potential for citizens using technology to organize social movements. The increasingly common practice of releasing troves of private documents through either media or transparency platforms such as Wikileaks has changed the meaning of privacy and transparency for citizens and governments alike. And E-commerce has revolutionized global markets and trade. 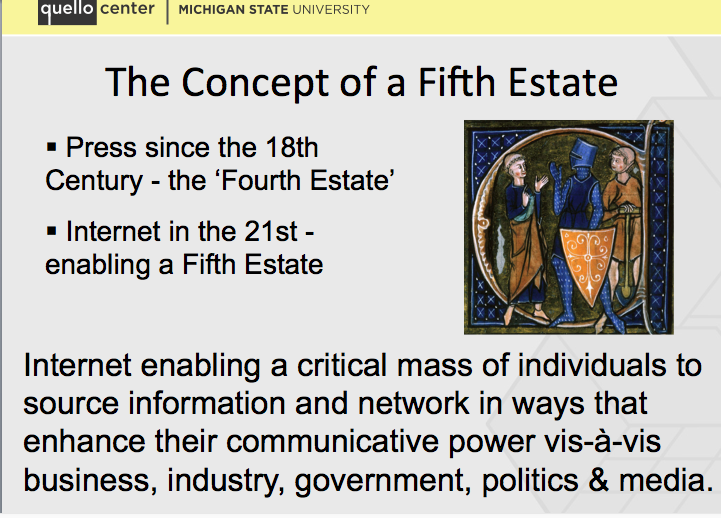 The Concept of the Fifth Estate – courtesy Bill Dutton

But with these developments, the Internet has also become more widely “used as a tool of surveillance, invasion of privacy and control of citizens.” Alongside government surveillance efforts, algorithms, trolls and bots have become a force to reckon with online.

“Politics in the digital age is all about… you reconfiguring your access to the world and also managing the world trying to get access to you,” says Dutton.

[Dutton’s slides and notes can be accessed here.]

Challenges to anonymity and privacy issues were addressed in the panel session, Convenience vs. Privacy, which looked at the ‘consumer’s dilemma’ in a networked society.

Panelist Rachelle Bosua described The Internet of Things, “a new world where almost every conceivable physical item sends and receives data via the Internet”. The phenomenon of refrigerators, coffee makers and baby monitors connecting to the Internet in order to transmit information both to users and manufacturers raises critical questions about data privacy and viability of interconnected infrastructure.

The October 2016 denial-of-service attack on a leading domain name server in the US conducted by hackers who manipulated signals sent by home appliances and the like, is just one example of a vulnerability that the Internet of Things can generate.

Melbourne’s Sharing Economy has been mapped with exploration of both commercial and non-commercial forms, even those at the edge:

Uber, one of the best known sharing economy’s disruptors, has been one of numerous stress factors for traditional taxi drivers. Driving for Change is developing an App to help with drivers’ psychological health. It will use a range of short activities suited to smartphones during their waiting time. Of course Uber drivers may also take advantage of this service, as they face many similar stresses as well as some that are unique to their situation.

Adding to the many global online forums and spaces for discussing gender-based violence, Not the Only One has created an Australia-based website where women can share their experiences of domestic violence:

Women suffering domestic violence often do not disclose abuse to others. Not the Only One offers an online sanctuary #NSS2016 #VAW

There were several other initiatives and projects that can be found on the MNSI website, including health, remote indigenous TV, environment, education, 3D printing, and infrastructure security.

At a session on the value of data, Lars Coenen from Sweden's Lund University spoke about the importance of big data to creating smart cities. But he repeated a concern that ran through the symposium:

The Twitter chatter from the symposium can be accessed at #NSS2016.