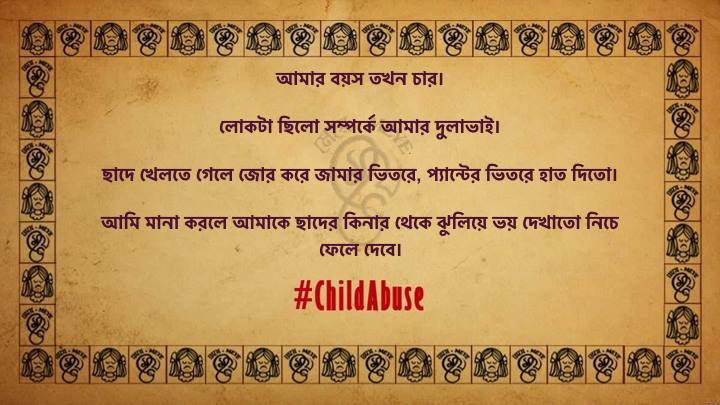 I was only four. He was my brother-in-law. While playing on the roof he used to slip his hands inside my pants or tops. As I prevented him from doing that he threatened to throw me off the roof. #ChildAbuse (Image used with permission from “Meye”)

Bangladesh is home to about 53 million children aged 0-14, who constitute around 34 percent of the country's total population. Child abuse is rampant in society, especially among the rural poor, street children and the vast workforce of child labourers. Most of these traumatic events and crimes still go unheard as families actively suppress them in fear of losing face or getting ostracised from society.

However, now that a women's network is sharing untold stories of child abuse and the government has launched a helpline to prevent child abuse there is finally hope for Bangladeshis that such crimes can be prevented in the future.

Child abuse has many forms and a child can be harmed by an adult through physical, sexual or emotional means. From a very young age children are vulnerable and abuse generally starts with people close to them — their family or friends and neighbors, who take advantage of them. A lack of sexual education and awareness abets these crimes as many do not understand the seriousness of the incident or are too afraid to tell their parents.

The abuses become even more traumatic because even if the crimes become known, many families observe a forced “silence” to protect the children. In close-knit societies, families are compelled to settle the incident by local arbitration, often involving pressure from local influencers. Victims typically suffer from depression and other mental problems as they grow up.

Thanks to Meye (Bangla for “girl”), a non-profit women-led network which advocates for women's rights, empowerment and leadership, many victims are coming out of the closet and breaking a culture of silence. Founded in 2011, Meye has created a community of about 5,000 women to date, mostly connected via social media.

The campaign has already seen a number of horrifying stories shared anonymously on Facebook (see images with captions). Meye says the main goal of this initiative is to create a discussion about ways to prevent them and end the de facto impunity of perpetrators. 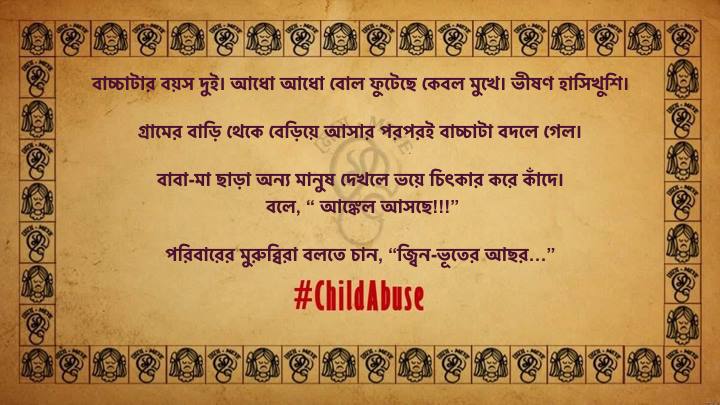 She was only two years old. A smiling child, Just starting to speak some words. She went to the village home on holiday with the family. But she changed after coming back. She used to cry in fear seeing strangers, “Uncle is coming, uncle is coming..” Her family thought she was possessed by Djinns. #ChildAbuse (Image used with permission)

Global Voices spoke with Salwa Mostafa, the key person behind the campaign.

Global Voices: What inspired you to start this campaign?

Salwa Mostafa: I undertook the campaign from my own volition, as I am a mother of a young child myself. Within Meye network some brave women had shared their horror stories of being abused as child. Once one person came forward, others also opened up and shared their dark memories. Many realised that they have similar past, but fear social retribution if they speak up. It was like opening pandora's box with ugly stories coming out. But everyone who did speak up, felt a relief to get that heavy burden off their chest, partly because a supportive network of women helped them feel that it was never their fault, as oppose to how society typically blames the victims. Once the stories were published on Facebook page, some men even approached us to share their stories. It seemed girls and boys alike are victims of abuse in our society. But men have even less space and more taboo to speak about it. 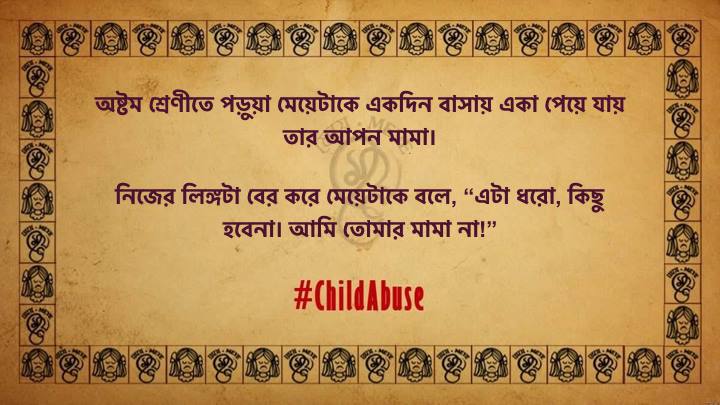 She was a student in class eight. She was alone at home when her maternal uncle came to visit. He pulled out his penis from his pants and told her. “Touch this, nothing will happen. I am your uncle.” #ChildAbuse (image used with permission)

GV: What responses are you receiving?

SM: We wanted to provide a platform to everyone to share their stories under anonymity through a simple online form. Within a week we had nearly 100 entries from women and men. And now we have more entries since it's going viral.

The work was too overwhelming, so I sought help from other Meye Network volunteers. Pratyasha Saha designed the images, Reejuta Sharmin and Smita Das helped draft the analysis and guidance write ups.

GV: What is the goal of this campaign?

SM: Our goal is not only sharing the stories but to provide guidance about preventing such kind of abuses. When someone spoke up, mothers/ parents expressed concern about how to protect their children from lurking predators. We also had examples of how parents had badly handled such a situation to make permanent damage to children. For every story of abuse, we try to analyse the situation, and suggest guideline on how to prevent or handle similar situation in the best manner. Because often times, child abuse is swept under the rug, because families are at shock and doesn't know how to deal with it. They assume hiding it from everyone, would make it go away, the child will soon forget and life will be back to normal. It is never the case. By repeating ourselves about the measures to take for prevention and aftermath of child abuse incident, we hope we will get people to at least think about it. Perhaps they will browse our pages to seek resources we provided under each image caption.

We had also contacted volunteer psychiatrists and had their reference handy in case any victim seeked further support. 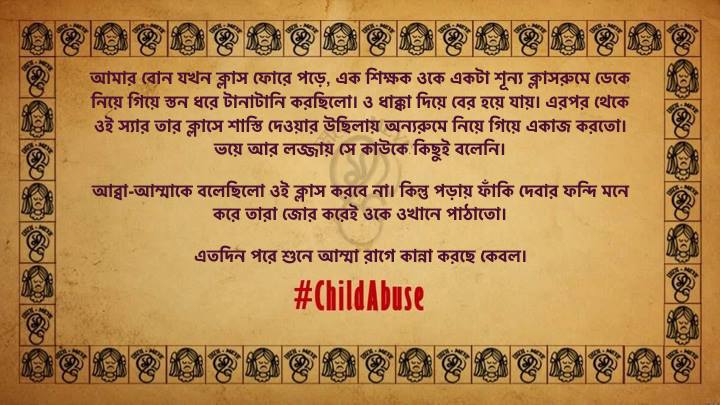 When my sister was in class four, a teacher touched her breasts in an empty room. She pushed him and ran away. He tried this a few more times in the form of a class punishment. But she did not tell anyone in fear. She told her parents that she will not attend his class. My parents thought she was trying to skip class so they forced her to go to the classes. After all these years my mom finally heard the full story. And she was only angry a little. #ChildAbuse (used with permission)

Inspired by the initiative, more and more people in the country are opening up about the abuses in their lives. But until October this year the country lacked a national helpline to report such abuses.

Please call “1098” to report any abuse to any children, it won't cost you any money. If you think that it won't change anything, but do your duty, share the news of the crime. In this country, even five-year-old girls get raped, and the society rapes her further with stigma. We deem that male children are immune to abuse, but those are reported less. [..]

Those who want to make a difference with their social media posts by solving any problem, I urge to them – please act; just dial “1098” and share stories around you. Yes, “1098” may not give solution to every problem, cannot fulfil all your expectations. But this is a start… this is an achievement.

Hasan Md Naheen wrote on his personal blog that sex education from primary level and up on top of more awareness on the part of families can help lessen such abuses. Families should prioritize the safety of their children rather than leaving children alone in an environment where abuses can happen, he wrote. Also, the parents should be approachable to children allowing them to relay such incidents without fear.

Start the work against child abuse in your home. Make every house safe for children. There is no alternative to that to end child abuse.