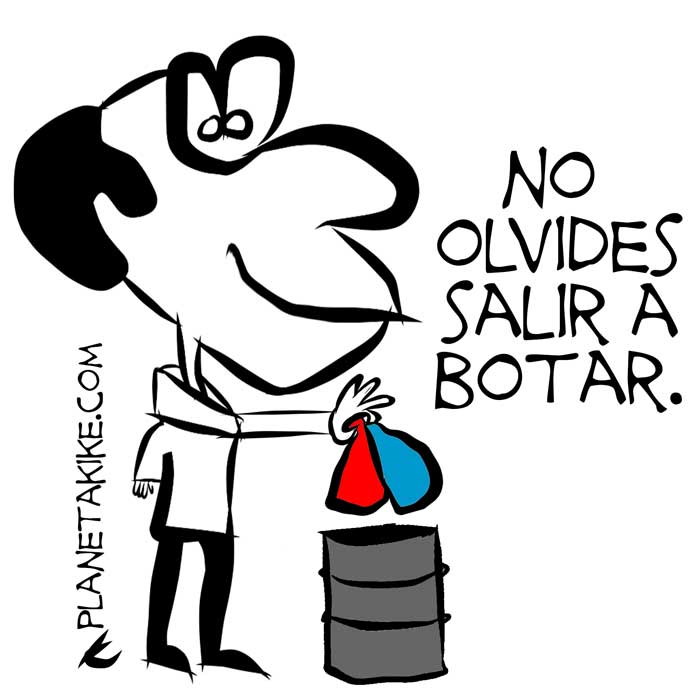 The illustration reads: “Don't forget to vote,” but uses a play on words. Normally, “to vote” would be written with a “v,” but in this case the artist decided to write it using a “b,” which changes the meaning to “to throw out [the garbage].” The red and blue represent the colors of the two largest political parties in Puerto Rico, red for the Popular Democratic Party (PDP) and blue for the New Progressive Party (NPP). Image by Kike Estrada and taken from planetakike.com [1]. Used with permission.

As the world anxiously observed the US elections, Puerto Rico, a US territory, also held its general election on Tuesday, November 8. And in a place that prides itself for historically having very high voting participation, turnout in these elections reached a new low.

While the pro-statehood New Progressive Party (PNP in Spanish) is celebrating that its candidate, Ricardo Rosselló Nevares, was elected governor and that they achieved a majority in the Legislature, the fact remains that voter participation for these elections reached only 55.09%, according to the official numbers of the State Electoral Commission [2] (Comisión Estatal de Elecciones, or CEE, in Spanish). This number is extremely low, considering that Puerto Rico traditionally has had a turnout of well over 75%. This year's numbers represent a huge drop from 78.19% in the 2012 election.

Another point of interest is the fact that Ricardo Rosselló [3] won the election with only 655,626 votes, or 41.76%. This is the number that is usually used when discussing by how much a candidate won an election. Bear in mind that Puerto Rico has a population of roughly 3.5 million, of which approximately 2.9 million were registered to vote. This means that the governor was elected only by a little over 22% of registered voters, or roughly 19% of the population. This is the first time that a candidate for governor has been elected to office with such low numbers.

One of the main theories for the widespread abstention is that these are the first elections held under the fiscal control board [4] imposed by the Puerto Rico Oversight, Management and Economic Stability Act, or PROMESA. Composed of seven unelected members, the fiscal control board was created by the US Congress with bipartisan support and imbued with powers that override Puerto Rico's already limited constitution. With the aim of tackling the archipelago's $72 billion debt, the board answers only to Congress, not the Puerto Rican people.

This has prompted many to question whether even having elections was worth the trouble, since the board has control over the government's budget, revenues and operations.

It is worth pointing out that some of the voters who abstained from participating in this election may have done so out of the conviction that to vote in Puerto Rico means to validate colonial rule. Historically, this has been a position long held by some supporters of Puerto Rican independence.

The two political parties hardest hit by voter abstention were the Puerto Rican Independence Party (PIP in Spanish) and the Working People's Party (PPT in Spanish). Because the electoral law in Puerto Rico is rather archaic, both parties now have to start yet again the long and uphill process of gathering signatures in order to be considered an official political party with representation and participation at the electoral commission due to their low amount of votes each got in this election — 2.13% and 0.34%, respectively.

University of Puerto Rico professor of political sciences Ángel Israel Rivera, writing for the digital magazine 80 grados, called for a reform of the electoral system [5] in Puerto Rico:

If the problem is properly looked at, the 2016 elections could be a good moment to initiate a massive movement of indignant people in favor of CHANGING the electoral system in Puerto Rico. A system that is so unfair and so limited that it produces bipartisanship or a hegemonic single party and nothing else. Why? Well, because the way to elect legislators is predesigned to exclude smaller parties and independent candidates from the legislative assembly. A system that is so antidemocratic that a party could win the representation of an entire district with only 40% of the vote, in spite of other parties obtaining 60%, combined. In other words, disregarding the fact that the “winning” party is actually in the minority. A system that makes it extremely difficult for minority parties, if they enter the legislative assembly, to promote and affect legislation because the majority party (be it the PPD or PNP) believes itself with the right to always, or nearly always, to govern and to legislate through a partisan caucus.

‘We know…it won't be him calling the shots’

This phenomenon of high voter abstention has garnered very little comment in mainstream media, which in the days immediately following the election was busy commenting on a novelty in Puerto Rican elections: the two independent candidates.

Alexandra Lúgaro and Manuel Cidre both ran as independent candidates for governor and were not affiliated to any of Puerto Rico's four political parties. In spite of this, they managed to obtain 11.12% and 5.73% of the votes, respectively, thanks in large part to their use of social media during their campaigns and the general malaise of the population towards the two main political parties that dominate the Puerto Rican political scene: the Popular Democratic Party (PPD) and the PNP. Considering that both candidates were relative unknowns at the time they announced their candidacy, the figures are considerable.

Another reason for the little attention Puerto Rico's high voter abstention has largely been overlooked is that most of the attention was focused on the US presidential victory of Donald Trump and the implications for Puerto Rico [3].

Indeed, comparisons were being made between Trump and Ricardo Rosselló since before the election. Ricardo Rosselló is the son of the controversial former Governor Pedro Rosselló (1993-2000), whose administration is notorious for having contributed a sizable amount of the $72 billion debt that Puerto Rico now struggles against.

Also writing for 80 grados, journalist Manuel Martínez Maldonado [6] had this to say a day before the election:

Like Mr. Trump, Mr. Rosselló entered lying. He exaggerated his skills, landed a job he didn't deserve [at the University of Puerto Rico], has been accused of plagiarism, of copying the supposed plans he has for the country from documents that already exist and repeats what we have already heard before with banal adornments. …[W]e know that should he be elected governor, it won't be him calling the shots.

It remains to be seen whether or not voters in Puerto Rico will continue to abstain from participating in future electoral events or if this is only because the archipelago is still reeling from a year full of bad news regarding its economy and sovereignty. The only thing that seems clear is that the next four years will be hard for both the people of Puerto Rico and the new administration, which isn't favored by a majority of the population.