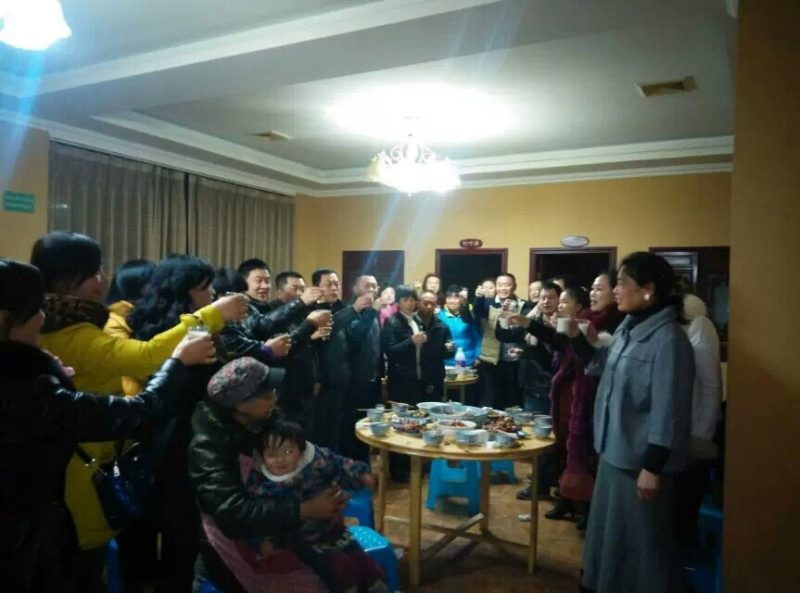 Huang Qi celebrating with Tianwang volunteers after being released from prison in 2011. Photo: Supplied by Huang Qi.

This post was written by Catherine Lai and originally published on Hong Kong Free Press on November 12, 2016. The version below is published on Global Voices under a partnership agreement.

Despite the continued detention of his reporters and having been imprisoned twice, the founder of the citizen news site 64 Tianwang says suppression will help the organization grow.

Reporters Without Borders on November 7 awarded its Press Freedom Prize to 64 Tianwang, which is widely recognized as a pioneering human rights defence website in China.

In an interview with HKFP, Huang said that the award is a way to recognize the work of their volunteer citizen journalists, nine of whom are currently detained and five have been released on bail, according to Tianwang. Six Tianwang citizen journalists were detained for their coverage of the G20 summit in Hangzhou in September. One of them is still in detention.

Despite the continued crackdown, Huang Qi and his volunteers have continued their work.

In 1998, 64 Tianwang started out under a different name as an organization that focused on human trafficking, which Tianwang founder Huang Qi described as a “serious problem in the late 1990s.” The site was established the following year. Huang Qi, a Sichuan resident, founded the project with money from his previous career as a businessman and factory owner.

As we were helping these people who had gotten lost or separated from their loved ones or who had gone missing, we discovered that in the mainland, behind these cases were judicial corruption or human rights infringements, so we expanded our work.

At times, their work has earned Tianwang positive coverage from mainland media, including from the People’s Daily, which is the largest official newspaper of the Chinese Communist Party. But they have also been criticized for their reporting on human rights.

Huang was jailed for five years for subversion in 2003 after hosting on his site articles about the 1989 pro-democracy movement in China that resulted in the Tiananmen massacre. He was again jailed for three years for “possession of state secrets” after investigating allegations that poor construction contributed to the deaths of schoolchildren in the 2008 Sichuan earthquake. He said:

I’m scared of being sent back to jail too, but so many people are suffering worse than us. And our work can help alleviate their suffering […] We also believe that Chinese society will finally progress towards democracy and rule of law.

Today, Tianwang is an independent news site that posts articles and information about human rights incidents in China, including detentions by police, forced demolitions, petitioner activism and demonstrations.

Huang even stood up for the rights of disgraced former public security chief Zhou Yongkang, calling for the authorities to protect his rights and not to treat him as a scapegoat.

We hope that in mainland China, everyone will have an equal judicial environment, and that [they] will not use double standards to deal with Chinese officials.

Although the site is blocked in China, Huang thinks it is still reaching domestic readers. He said:

They have all sorts of tools to get around the blocks… and they have their own ways of sharing posts.

The site is read by thousands of Chinese citizens, rights organizations, foreign media, and government officials and police – some who are wary of the site reporting their misdeeds and others who are hoping for things to change.

When asked if he was worried that the award might cause suppression to increase, Huang said:

In 18 years, we’ve met with many kinds of suppression, but we’ve never yielded. We also think that this kind of suppression is a necessary condition to help us grow and help us perfect our work.

In 18 years, no 64 Tianwang volunteer has ever agreed to sign a confession drafted by the authorities […] The main reason they haven’t confessed is that they themselves believe that what they’re doing is right. Their actions are in accordance with the charter of the People’s Republic of China and its related laws, and Xi Jinping’s principle of the rule of law, and the principle of a harmonious society.

He told state media in 1999 that Tianwang would become a media organization on par with outlets like the Washington Post, the Associated Press, Agence France-Presse, and CNN.

When asked if he had attained this standard, he said:

Right now, our standard is still very poor, because we have poor material conditions and we are constantly met with suppression. But in the future, we will definitely do a great job. 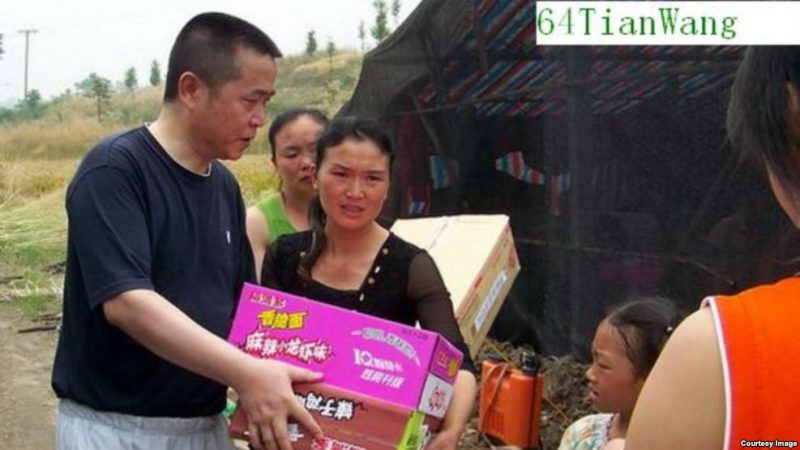 Huang helping victims of the Sichuan earthquake in 2008. Photo: VOA.

Despite the authorities’ suppression of their work, Huang remains optimistic – to some, maybe, unreasonably so. Huang insists that the human rights situation is improving in China if viewed in the context of wider trends as opposed to individual cases, even though human rights organizations have said that the situation is deteriorating under current president Xi Jinping.

The human rights situation in mainland China has changed hugely in the past 18 years… I think that eventually – at worst in eight or ten years – China will achieve real press freedom.