Ukraine Cracks Down on Internet Piracy 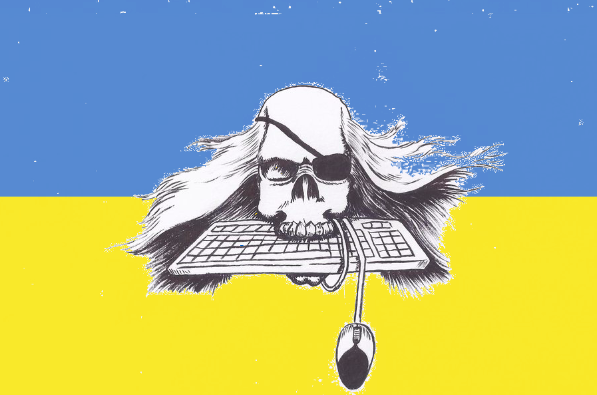 EX.UA, Ukraine's most popular file-sharing service, announced on Wednesday that it will shut down its operations, citing the passage of new national anti-piracy legislation.

The announcement, which administrators posted on the website's homepage, comes amidst a broader government effort to strengthen Ukraine's intellectual property laws and crack down on internet piracy: the country's parliament recently passed a law entitled “On State Support for Cinematography” that will allow copyright holders to block sites that violate copyright laws without needing a court warrant. On Tuesday, Ukraine's cyber police seized servers belonging to FS.TO, another popular file-sharing service.

EX.UA, which was founded in 2009, allows users to upload and download content to its servers for free, and is a popular destination for Ukrainians (who account for nearly two-thirds of the sites’ users) looking to pirate movies, music, and other digital material. According to Alexa, a company that tracks internet traffic, EX.UA is the 11th most popular website in Ukraine and the 1,636th most popular in the world.

Dmytro Shymkiv, the deputy head of the Presidential Administration for administrative, social, and economic reforms, told journalists on Thursday he was happy EX.UA had come over to the “light side,” and that its closure represented an important success in Ukraine's fight against internet piracy.

They (EX.UA) have a business model that has allowed them the opportunity to earn money by spreading illegal video content with Ukrainian advertisements. Ukrainian advertisers paid money for ads, but the rights-holders of the content never received any compensation from them.

Shymkiv said EX.UA's proprietors made more than $1 million per year from the website.

After the seizure of FS.TO's servers, the writing was on the wall for EX.UA. Artem Afyan, a lawyer at Justucum, a law firm that represents ex.ua, told tech website AIN.ua that broad changes to intellectual property law in Ukraine had motivated the decision to shut down the file-sharing service. He expressed concern over the security of personal files and information, which site administrators have asked users to remove by November 30.

The service understands that in light of the current tension in society, the forced closure [of EX.UA] may lead to increased protests, like in 2012. This is not a response to concrete action, but rather the recognition that future action or inaction could entail a threat to users’ information.

EX.UA administrators wrote that they have received direct threats, including blackmail and DDOS attacks over the past year. Some of these threats, which they say “jeopardize the personal information and personal user files being stored on the site,” have come from abroad. The administrators maintained in their letter to users that they have not broken the law, and that they are closing in order to continue acting legally: “EX.UA will never abandon its position of respecting Ukrainian law, and therefore has made the decision to shut down its operations.”

This is not the first time the government has tried to crack down on EX.UA. Authorities’ attempts to shut down the website in 2012 were met with fierce resistance from internet activists and hackers, who attacked government websites in the days after the Interior Ministry opened a criminal investigation into EX.UA's activity and raided its offices. The government was ultimately forced to back down.

Indeed, EX.UA may not go down easy. The site's users balked at the government's 2012 efforts in part because of perception that those in power were themselves criminals; they didn't want to accept intellectual property laws imposed on them by a “bunch of thieves.” With confidence in the Ukrainian government again waning, especially after the extent of state corruption was laid bare in public servants’ electronic asset declarations earlier this month, it's unclear whether EX.UA will stay down for long.

Despite the bad news for EX.UA's users, the site's administrators wrote in a post script that “the darkest light comes just before dawn,” and that a period of “uncontrolled” piracy might reinforce the importance of allowing users to access material legally. The full statement posted on EX.UA's homepage can be read below. 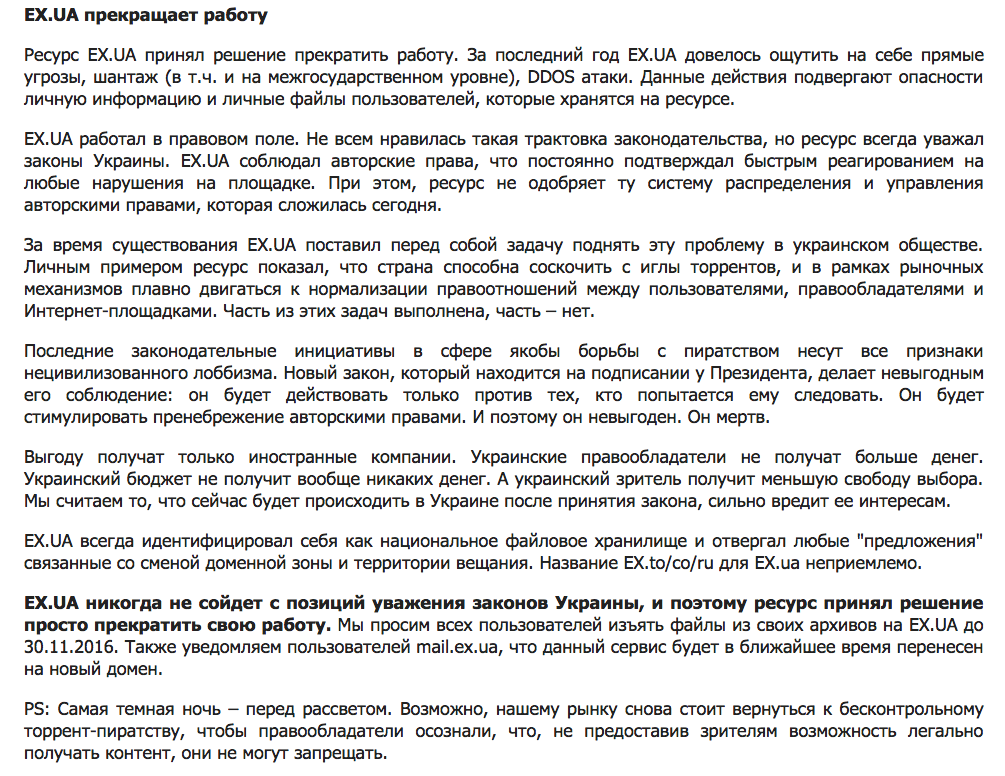 The message posted by ex.ua administrators on the website's homepage on Wednesday.