The Uphill Battle of Protecting Syrian Antiquities Amidst War 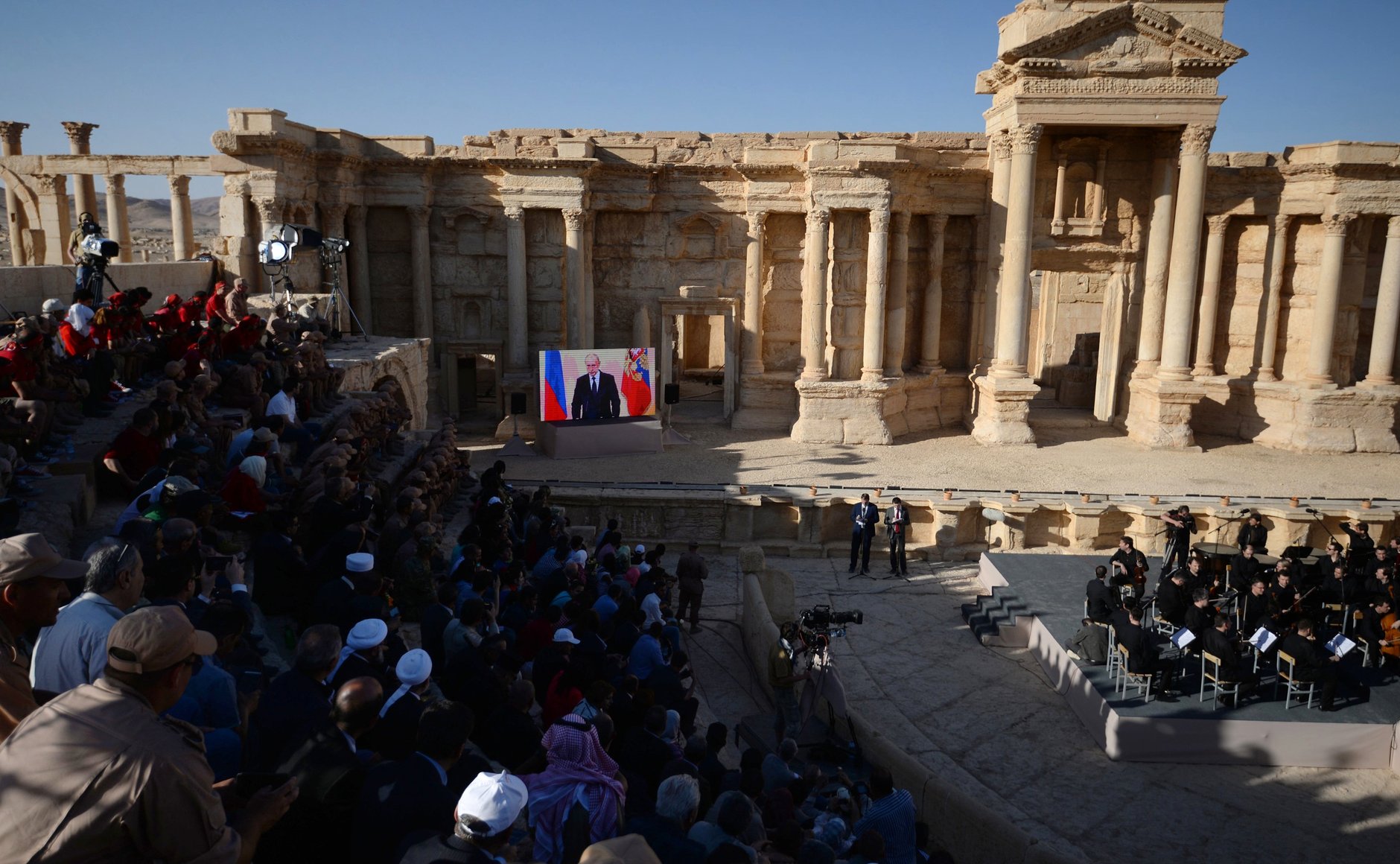 Main Photo: Concert of the Symphony Orchestra of the (Russian) Mariinsky Theatre in Syrian Palmyra – 5-6-2016 (Kremlin.ru/CC BY 4.0 via Wikimedia Commons)

This story was originally written for Syria Untold. It was translated by Cristel Abou Anni. It is republished here as part of a partnership agreement.

SyriaUntold interviewed Dr. Cheikhmous ʻAli about the multifaceted aspects of the illegal antiquities trade, and the efforts in place to safeguard Syria’s artifacts in such a delicate phase.

Dr ‘Ali is a research assistant specialized in Near Eastern Archeology at the University of Strasbourg, and the director of the Association for the Protection of Syrian Archaeology (APSA), a network of scientists, journalists and citizens who document and disseminate information about the destruction and pillage of Syria’s heritage. ‘Ali is also a fellow at the Paris Institute for Advanced Study.

SyriaUntold: What are the main routes used to smuggle Syrian antiquities into neighboring countries? Who is involved in smuggling activities (and who are the mediators) at the local, regional, and international levels?

Dr. ʻAli: Prior to 2011, smuggling antiquities was an activity undertaken by a few people who had contacts with the [Syrian] authorities, such as intelligence and army officers, and it mostly took place via Lebanon.

As of the second half of 2011, several major archeological sites like Dura-Europos, Apamea, Palmyra, and Ebla were subjected to arbitrary excavations. Most of the artifacts looted from northern Syria were sent to Turkey, while those stolen from Homs and Damascus were smuggled into Lebanon. As for those found in the south, they were sent to Jordan. However, these countries are mere transit points; once the goods arrive there, merchants and mafias are soon contacted to smuggle the artifacts into Europe, America, the Gulf, or Asia via organized mafia networks that deliver the pieces to private collectors.

Inside Syria, smugglers of antiquities and residents of nearby villages do the excavations. When they stumble upon artifacts, they either sell them to local merchants or smuggle them directly into neighboring countries to be sold there. In some cases, the excavation first needs to be authorized by the military force in control of the region, like Daesh [also known as ISIS, ISIL or IS] in the countryside of Dayr az-Zawr and Raqqa. That way, they can get a piece of the cake.

SyriaUntold: Some say that Bashar al-Assad's regime relies on trafficking antiquities to finance its war via complex relations with key smugglers. Are there any leads or evidence in this regard, or do you believe that it is a mere accusation between the regime and the opposition?

Dr. ʻAli: In every military faction, including the regime’s army, you find a group involved in facilitating excavations and smuggling operations. Before the Palmyra site fell in the hands of Daesh, for instance, numerous smuggling operations were organized under the regime’s eyes. The same goes for Apamea; where there’s a checkpoint called Hajez al-Athar (the Antiquities Checkpoint), and excavations take place in broad daylight without any intervention from officers or soldiers.

In terms of facilitating smuggling operations, everyone knows that [Lebanon-based militant group and political party] Hezbollah and the Syrian Army control the borders between Syria and Lebanon. Nonetheless, there are often news of the Lebanese authorities arresting smugglers and traffickers and confiscating Syrian antiquities. The question is: how did these artifacts reach Lebanon in the first place? Syrian Army and Hezbollah officers undoubtedly have something to do with this.

SyriaUntold: What are the most popular pieces among private collectors? Are private collectors considered the main buyers of looted antiquities, or do international museums play an important part in this black market?

Dr. ʻAli: The most popular artifacts are exceptional pieces, such as mosaics, funerary statues, etc., but that doesn’t mean that smaller pieces – like coins and clay sculptures – aren’t on demand as well.

Most buyers are rich antiquities collectors. I don’t believe museums would take part in such a trade, since they would be bound by the 1970 UNESCO Convention to return the pieces to Syria after the end of the war, if caught. At present, there are no recently smuggled goods in any museum, but some were confiscated after being smuggled into Turkey, Lebanon, Jordan, and France, and they are probably stored in museum warehouses, waiting to be shipped back to Syria.

SyriaUntold: Has any Syrian authority set up of a mechanism to later recover Syrian antiquities?

Dr. ʻAli: As far as I know, there isn’t any legal archaeological committee handling this issue at present. However, from time to time, the [Syrian] Directorate-General of Antiquities and Museums (DGAM) forms delegations to examine the confiscated items in Lebanon and oversees their journey back to Damascus.

SyriaUntold: The media often focuses on Daesh’s actions and its hostility toward archeological heritage. Who do you believe is to be held accountable the most for demolishing and plundering Syrian antiquities since 2011? Are there any reliable figures in this regard?

Dr. ʻAli: The first party to be held accountable for the destruction is the Syrian regime. Its aircrafts have shelled Homs, Qalʻat al-Madiq, the Krak des Chevaliers castle, and the Old City of Aleppo, and they continue to do so. Second comes Daesh, which has destroyed a great number of cemeteries and Sufi shrines, as well as other religious monuments in the countryside of Aleppo, Raqqa, and Dayr az-Zawr. After that, we have some opposition brigades that bombed tunnels under historical buildings to target entrenched Syrian Army soldiers in the Old City of Aleppo, near the Citadel.

Archeological sites are sabotaged with bulldozers to build barricades and dig trenches to protect the machinery and soldiers. All military forces in Syria do this, in addition to the illegal excavations often led by smugglers. However, there are no official figures that can determine the exact number of damaged buildings, museums, and archeological sites.

SyriaUntold: Since the Association for the Protection of Syrian Archaeology stopped recording archeological damages in Daesh-controlled regions for the safety of its own members, how have you been monitoring the condition of antiquities in these territories?

Dr. ʻAli: Given the dangerous situation, there are no groups directly involved in monitoring or documentation. We mostly rely on what some individuals, or even the terrorist group, publish. For example, the latter shares news of demolished cemeteries and shrines on social media, in addition to videos of citizens and activists being executed, such as the one published on December 2, 2015, thanks to which we were able to determine the condition of al-Mayadin’s ar-Rahba Citadel.

SyriaUntold: What are the biggest local Syrian initiatives aimed to safeguard antiquities?

Dr. ʻAli: Several local initiatives have been launched in certain regions [that are located outside of regime control] through organizations and centers, such as those in Bosra (the Departement of Archeology in Bosra Sham City), Idlib (Idlib Archeological Center), Aleppo (the Free Aleppo Governorate’s Department of Archeology) and al-Hasakah (the Authority of Tourism and Protection of Antiquities). These institutions organize documentation, restoration, and awareness campaigns at the local level. As for regime-held regions, the DGAM undertakes such actions.

SyriaUntold: Who supports these initiatives at the international level? What do you think of the efforts exerted by major organizations, like the UNESCO, to protect Syrian antiquities?

Dr. ʻAli: Some international actors have supported local initiatives, like the University of Pennsylvania that implemented restoration projects in the Maʻarrat al-Nuʻman Museum. As for international organizations, all they did was sign agreements with neighboring countries to fight trafficking, as well as holding a number of conferences, and organizing training sessions that targeted DGAM employees only. Meanwhile, non-governmental organizations in regions that are not controlled by the regime have not received any support from these institutions.

SyriaUntold: Do archeologists have any alternatives at the institutional level for the way that the regime used to run the DGAM? Or do you believe that the Directorate was well-operated regardless of the regime’s despotism, and should therefore continue its work with some development?

Dr. ʻAli: There aren’t any tangible alternatives for the time being. The Directorate has 50 years of scientific heritage. This cannot be simply disregarded because it’s a government institution, but several of its regulations certainly ought to be changed, and it needs to be entirely restructured to keep up with other scientific organizations.

SyriaUntold: Documenting violations is one of the main activities of the Association for the Protection of Syrian Archaeology. Is there any precedent for the prosecution of smugglers at the international level that has encouraged you to pursue your efforts?

Dr. ʻAli: Extremists who destroyed Sufi shrines in Timbuktu, Mali, were recently prosecuted in The Hague and the main criminal involved was sentenced to nine years in prison.

Syria’s problem relies in the fact that it did not sign the UNESCO’s Convention on the Means of Prohibiting and Preventing the Illicit Import, Export and Transfer of Ownership of Cultural Property in 1970, which makes it impossible to ensure the prosecution of criminals who committed these violations under the present circumstances.

These circumstances might change in the future and a special tribunal could be established even though Syria hasn’t signed the 1970 Convention. We are therefore documenting all the acts of destruction committed by certain people, organizations, or states and gathering all information about these incidents, hoping to have a tribunal established one day – a tribunal where each person who harmed the Syrian heritage would be held accountable.