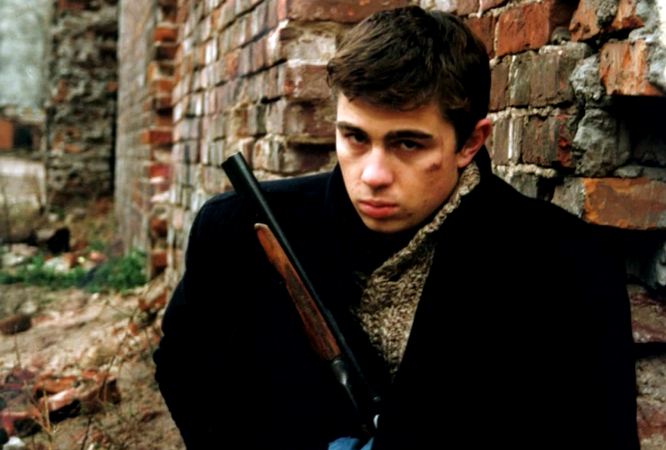 Shortly after the EuroMaidan Revolution and the Russian annexation of Crimea in 2014, Roman Sergeev, a 36-year-old video art director from Moscow, decided it was time to realize a long-held dream: to build a monument to Sergei Bodrov Jr., the actor who played Danila Bragov in the Russian cult classic films Brat (1997) and Brat II (2000). With Russia supporting a separatist movement in eastern Ukraine and waging an aerial campaign in Syria, Sergeev and the other founders of the “Brat Danila” project wanted to monumentalize Bodrov Jr. and the vision of Russian power he has come to represent: “More than ever,” they write on their website, “we felt the need for a symbol of the protection of the [Russian] land and its people.”

Now, more than two years later, the project is beginning to take shape: since launching a crowdfunding campaign in June, Brat Danila has raised more than 300,000 rubles ($4,650), or around 85 percent of its 350,000-ruble goal. (This sum is only for the preparatory work on the statue; taking into consideration taxes and construction and mounting costs, the monument is expected to cost 2,685,000 rubles, or $41,622.)

The Brat Danila team wants to build a bronze statue in Moscow or St. Petersburg, where Brat and Brat II were filmed, with the exact location to be determined by a poll conducted on the project's website and in cooperation with city officials. St. Petersburg is currently leading the online poll by a wide margin.

The Brat duology tells the story of a Danila Bragov, a Russian soldier who returns home after fighting in the First Chechen War and gets involved in St. Petersburg's violent criminal underworld. He quickly becomes one of the city's most feared killers, embodying the cutthroat attitude of the “wild west” world of 1990s Russian organized crime.

The Brat films elevated Bodrov Jr. to stardom, though his life and career were cut short in 2002, when he and 27 members of a film crew were killed in a landslide in the Caucasus Mountains. Bodrov Jr.'s legacy grew after his tragic death, and Bragov remains one of the most famous movie characters in post-Soviet film: Bodrov Jr.'s portrayal of Bragov epitomizes a kind of gangster machismo—one of power, honor, and loyalty—that occupies an important place in contemporary Russian masculinity.

The Brat Danila initiative comes amidst a broader effort by Russian authorities to monumentalize historical figures: a statue of Vladimir the Great was recently unveiled outside the Kremlin, and the city of Oryol erected a statue of Ivan the Terrible in October. There are even plans to build a statue of Mikhail Kalashnikov, the inventor of the eponymous rifle.

Similarly, Brat Danila hopes their monument will “secure Danila’s image as an important touchstone of patriotic culture” and “create a symbol that will help bring people together.” On the project's crowdfunding page, the Brat Danila founders write that they believe “Danila Bagrov will be able to unite our people and make a clear statement about [Russia’s] national idea.”

Russian culture hasn't created anything like him in 15 years. Appearing on the screen during our country's deepest crisis, Danila became a real role model and means of support for many children at the time who were growing up without a father or older brother.

The initial sketches, drawn by Vasily Goncharov, show Bodrov Jr. dressed as Bragov, wearing a thick sweater and carrying a backpack. The statue will be made of bronze and sculpted to scale. 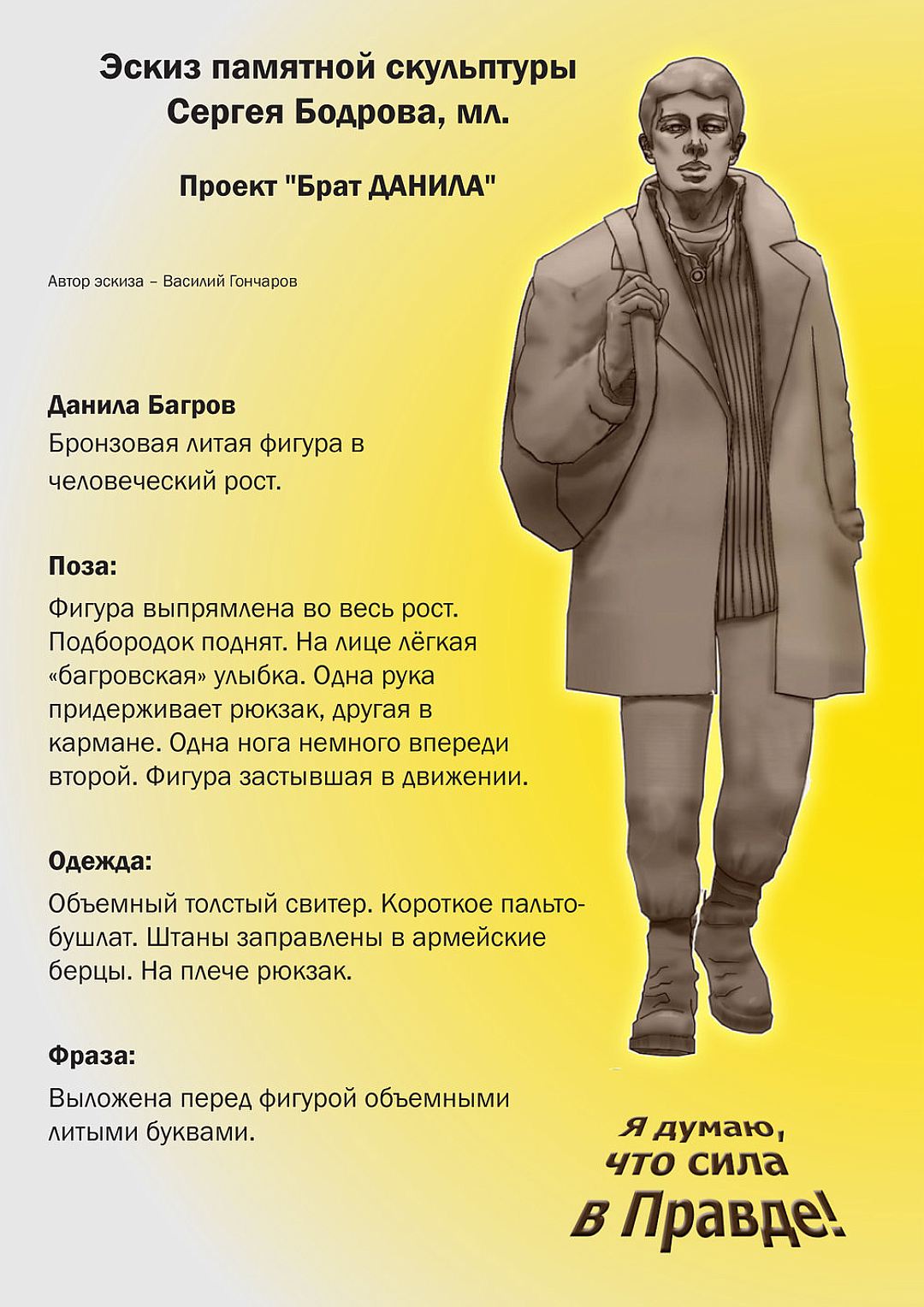 A sketch and description of the monument to Sergei Bodrov, to be built in Moscow or St. Petersburg.

The phrase “I think power lies in truth,” excerpted from perhaps the most famous scene in Brat II, in which Danila asks an American about the relationship between money, power, and truth, will be written at Bodrov Jr.'s feet.

Tell me, American, what is power? Is it really money? My brother says it's money. You have a lot of money, but so what? I think power lies in truth: whoever is right is strong! You've screwed someone out of money, and so what — did you get any stronger? No, you didn't, because you weren't right. And the guy who got screwed, he was right. That means he's stronger.

It's easy to see why, in the midst of a deep economic recession and with elevated anti-American rhetoric coming from state officials and institutions, a statue of Bodrov might resonate with Russians.

Brat Danila has built a significant social media presence, managing accounts on Instagram, VKontakte, and Odnoklassniki. In a promotional clip posted on their website, Sergeev asks supporters to photograph themselves embracing friends and relatives with the hashtag #БратДАНИЛА

Instagram users have been eager to use the hashtag in the months since the project kicked off.