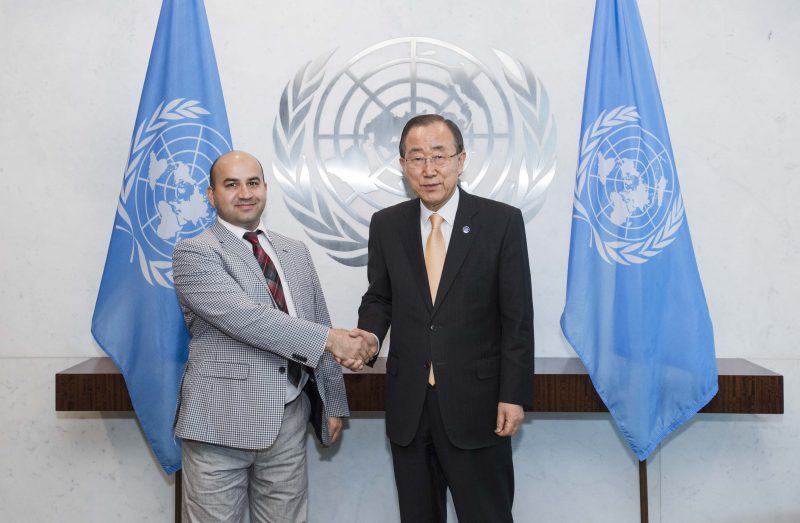 Dag Hammarskjöld Journalism Fellow and Global Voices author Abdulfattoh Shafiev conducted interviews with Ban Ki-moon, United Nations Secretary General and Peter Thomson, President of the UN General Assembly on November 11 and November 10 respectively in their offices at the United Nations Headquarters in New York. The two UN chiefs answered questions relating to the impact of Donald Trump's surprise election as US President on the organisation's work in key areas such as climate change and migration, as well as questions on other topics such as authoritarianism and water policy.

Donald Trump's shock victory in the US presidential elections last week did not just throw question marks over the future of the world's biggest economy and most powerful international actor. Trump's promise at the Republican National Convention in July that “Americanism, not globalism, will be our credo” cast shadows over the very future of multilateralism and the international organisations that emerged from the wreckage of World War Two, while his views on key global issues such as migration and global warming have been well-documented.

But over at the United Nations Headquarters in New York there were no visible signs of panic at Trump's election, and two of the organisation's top-ranking figures appeared in relaxed spirits as they offered their views on some of the most important questions of the day.

This author's conversations with UN Secretary General Ban Ki-moon and UN General Assembly President Peter Thomson began with a review of the US president elect's statements on two of the most important deals overseen by the organisation in recent times, and moved on through authoritarianism, migration and water in Central Asia.

How to understand Donald Trump's statements on Iran and climate change?

One issue that claimed a lot of column inches during Trump's presidential campaign was his suggestion that he might rip up the deal reached between Iran and the so-called 5+1 (Britain, France, Germany, Russia, the United States and the European Union) over its controversial nuclear programme.

This is a deal which has been agreed upon by five members of Security Council and Germany and is fully supported by the Security Council. The US has played a crucial role among the members and the UN has been fully supportive of this agreement. Of course this deal may not be a perfect agreement, but we are not living in a perfect world. If there is anything that may not be satisfactory to newly elected president, he should discuss it with the parties concerned. What is important is the implementation of this agreement in a faithful manner. Whatever he might have said as political rhetoric during the presidential elections, I feel sure that once he becomes the president in January, he will be committed to the agreement. Since the UN was established, we have seen many changes in US administration from the Democrat party to Republicans. But all of them have honoured such agreements. 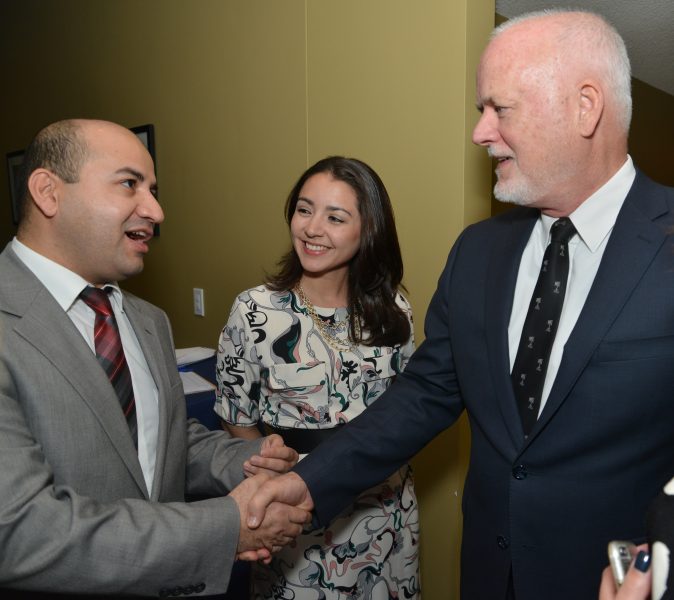 While refusing to be drawn on Trump's specific comments about global warming and the Paris climate agreement (before becoming a presidential candidate, Trump is on record as calling global warming a hoax invented by the Chinese, comments that during the campaign he denied having made) UN General Assembly President Peter Thomson doubted that one man would be able to overturn the growing international consensus on the topic:

I don’t’ want to speculate on what he believes in and what he is going to do, but what I’d say it is that that it is very obvious that mayors, community groups, individuals, large swathes of America, realise that America’s best interest and humanity’s best interests lie in the clean energy future. If you are mayor of Miami, you don’t need somebody to tell you that the sea level is rising, you just walk down the street and see the water coming up through the grills in the street and see that you have got to do something about it. My point here is that while governments are obviously extremely important, it is people that will make the change. We are now seeing that renewable energy is moving towards being as competitive and even more competitive than fossil fuels in some instances, and what is good for business will be good for this country and the world, so I am not too skeptical about any of that.

Two months ago when addressing the opening of the 71st session of the General Assembly, Ban Ki-moon took advantage of the opportunity to use his last major speech as UN Secretary General to implore the world's tyrants not to tinker with constitutions in order to cling to power.

Global Voices asked Ban to expand on these comments:

One of the regrets and disappointments I experienced during my ten years serving as Secretary General is that I have seen some leaders, who are not committed to democratic principles and try to cling to power against the will of people. It is important that leaders should listen carefully to the voices of people, their expectations and challenges. But when you shut down for years such voices and this becomes the source of grievances, these grievances, if not addressed properly, can turn into demonstrations, resistance and even violence by people.

Most of the world’s problems which we are seeing were not caused by people. Unfortunately, they were caused by the leaders themselves, because they are not listening to the people’s voice. Whenever I went to very important meetings and summits, whenever I could talk to the leaders, I said: When your constitutional term comes to the end, please, do not try to change the constitution, please, do not cling to power. This has been my consistent message.

Uphold the dignity of refugees and migrants: No xenophobia, no discrimination! 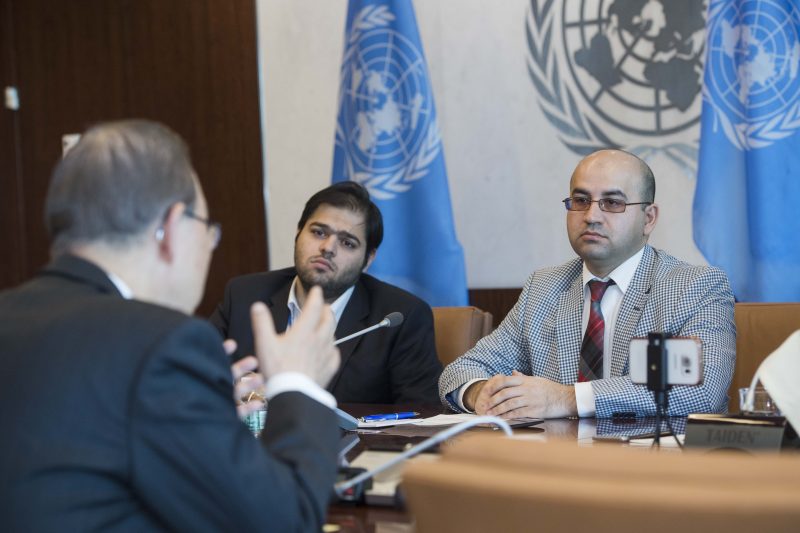 Ban's own time in office ends on December 31 when he will be formally replaced as UN Secretary General by ex-Portuguese Prime Minister Antonio Guterres, who was elected in October. The UN boss told Global Voices on November 11 that he thought Guterres would be the ideal man to formulate the organisation's response to the refugee and migration challenge that has come to dominate headlines in recent years.

This author comes from a country, Tajikistan, where over a million nationals are forced by economic circumstances to seek work in Russia. A lack of protection for migrants abroad has led to countless tragedies impacting millions of families across the world, while politicians such as Trump and Europe's emergent nationalist parties continue to use them as political cannon fodder.

Ban told Global Voices he believed the UN had a key role to play in ensuring the human dignity of migrants and refugees:

My successor Antonio Guterres served for ten years as UN High Commissioner for Refugees. So you will find him most experienced, most able and most committed in addressing migrants’ and refugees’ issues. We have 65 million refugees and migrants at this time. This is the most number of refugees since World War II. Without going into any specific cases, we are deeply concerned about the trend of discriminating against and abusing the human rights of migrants and refugees who had to leave their homes because of persecution, danger, and threats to their lives, as well as for hopes of a better future and better opportunities. No discrimination, no xenophobia, and no mistreatment of refugees – this is a fundamental principle of human rights.

A final challenge faced by many regions of the world including this author's home region of Central Asia is the use and management of increasingly scarce water resources. Tajikistan, which is one of Central Asia's comparatively water-rich countries has consistently raised its fears over regional water issues at the UN General Assembly.

Global Voices asked Peter Thomson, on the eve of his participation at the upcoming Water Summit in Budapest from November 28-30, how he viewed the future of global water policy.

That is precisely why I’m going to be at the Water Summit in Budapest. Hungary, Tajikistan, Finland and a couple of others have been really instrumental in driving progress towards Sustainable Development Goal Six (ensuring availability and sustainable management of water and sanitation for all). I recognise that the politics of fresh water is going to be big part of the 21st century and it’s important to understand that everything in the world is about sharing and inclusivity. I know that Tajikistan is very responsible in this area and this is one of reasons why it takes the lead in SDG 6 matters — because it has such a stake in the game.

There are big problems in Central Asia with sources of water. Glaciers are melting at a frightening rate and along with the weakening Indian monsoon, this has implications for future water supplies in the region. These are all things we are going to be discussing in Budapest. But I do think the world is starting to wake up to the fact that the problems Central Asia is facing are going to be problems experienced around the world. That is why I have called for a meeting in Budapest outside the summit where we will talk about what we can practically do on SDG 6 in terms of [cooperation on] water politics, which will be a growing concern for humanity as climate change kicks in around the globe.