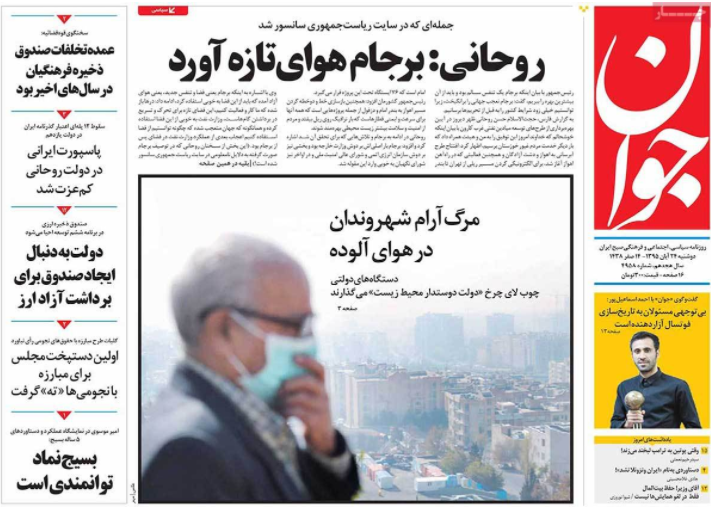 The cover of the Tehran daily Javan, with the headline (in the photo): “The peaceful death of citizens in the polluted air.” Screenshot from Jaaar.com.

Iranians were issued a smog warning for this week, starting their Monday off by being told to stay indoors or don face masks if they venture outdoors.

Tehran is known for many things — a vibrant city full of culture, life, the capital of the nation and the third biggest metropolitan city in the Middle East (after Cairo and Istanbul). But one thing that has uniquely set it apart from its neighbouring metropolises is its persistent smog.

In recent years the problem has escalated. In December 2015, Tehran was put under an unprecedented warning that contaminants in the air were seven times the maximum level recommended by the World Health Organization (WHO). The record high of last year was not reached, but on 13 November, 2016 similar warnings were issued for contaminants being three times over the the WHO recommendation.

Schools were shut down on Monday and continue to be closed into the week, as ordered by the Ministry of Education. Residents were warned not to go out unless absolutely necessary, with particular warnings to remain indoors for the elderly, children, pregnant and those with respiratory problems. The pressure is expected to lift on Wednesday when a wind us expected to push through the stagnant and polluted air.

Smog becomes a matter of national concern every year as the weather cools. Cold weather traps the high levels of exhaust within the city, fuelled by the millions of ageing cars and motorbikes in a city of 10 million residents.

The issue has become a political talking point, especially as hardliners blame the moderate administration of Hassan Rouhani for failing at their environmental policy. It's no surprise that the hardline Javan newspaper ran a headline on Monday claiming “the peaceful death of citizens in the polluted air.” Their front page article referenced a 2014-2015 study that claimed 5,158 residents of Tehran had lost their lives owing to respiratory problems caused by the pollution.

It appears that this week, many of the residents of Tehran are continuing about their daily activities as per usual, although many with face masks or with efforts to use the cities developing metro system. 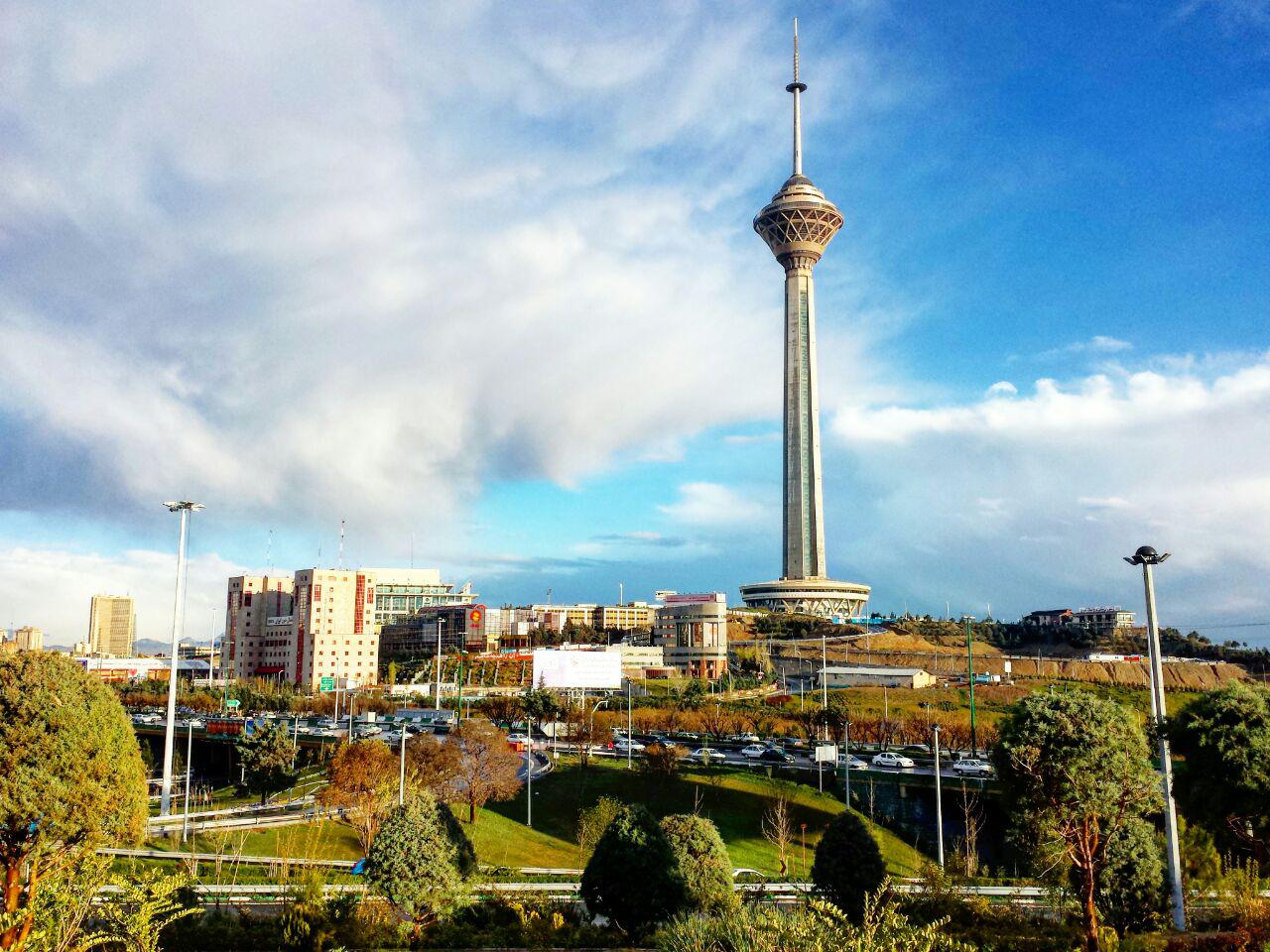 One reoccurring image that has been springing up on Iranian Instagram and Telegram accounts is Tehran's iconic Milad Tower, either engulfed by the smog or wearing a face mask to deal with the smog. Below are some samples of various Tehran based Instagram users depicting versions of the tower amidst the city's smog.

In the first, the tower screams out “komak,” Persian for “help,” as it's surrounded by polluted air:

In the second post, a user uses the occasion of smog to make a romantic sonnet for a lover who has left, only to leave smog behind in her absence:

The last photo, a cartoon of the tower with Tehranis blindly reaching up towards it, is posted with a somber caption describing the poisoning of the city's population:

#temporary_post… #writer_image. I came out onto the heavens. #smog was within my city's atmosphere and there was a shortage of air… #wrote_smog #for it #the_smoke_anddust_to be resolved #Tehran for the people is like the world…#irony_written #smoke from car exhausts have clogged my heart and brought my fearful head to finally bald…#wrote_lead. #a wound and #smog has gone down my throat and taken the portion of my enemy and rogue enemies…#foundation_written. #poison it is #smog, in this situation I think turn us to honey…#tehran_polluted #weather_pollution #Tehran's_breath_taken #lazuli_sky_ofmyTehran_mywish #pollution_and_smog_ourcity's_situation #smog_has_taken_our_breath_away