Argentina’s Changing History, as Seen Through 100 Years of Beauty Ideals 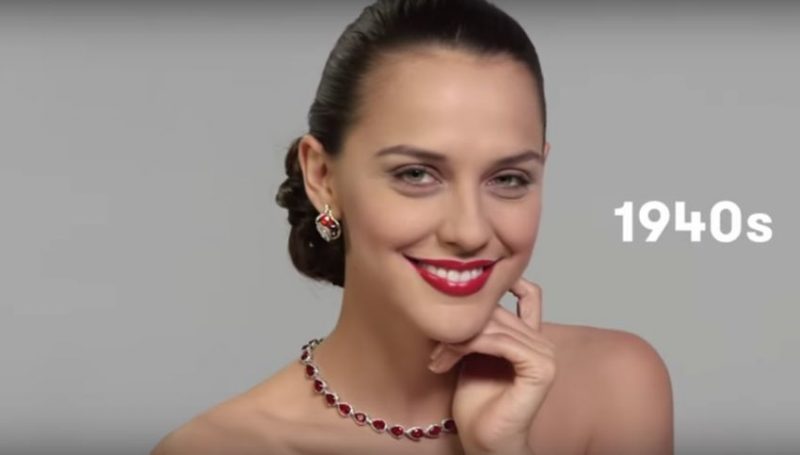 The model Mariela Irala made-up in the style of Evita, a 1940s icon. Image taken from the video ‘100 Years of Beauty: Argentina‘.

Uploaded to YouTube on 26 October, this tribute to Argentina takes scarcely more than a minute to use the changing trends in feminine beauty to summarise the significant historical events and cultural icons that have marked every decade of Argentinian history since 1910. It is the story of an entire century told in images and symbols.

Revisiting the last century of Argentina's turbulent history, with its times of struggle, hope, numerous recessions, wars and six coup d'états, and then condensing it into such a short video, required a great deal of research by the production team. They had to choose hairstyles, make-up, accessories and appropriate gestures with great care, to demonstrate both the changes in fashion and in the personality and the history of the Argentinian people.

This mini documentary begins with the Modernism era of the early 20th century, bringing out icons like the beloved former first lady Eva Perón, a big symbol in the country's history, and the actress and glamour model Isabel “Coca” Sarli, considered the quintessential sex symbol of Argentina. It then moves to the dark times of the military dictatorship and the Mothers of the Plaza de Mayo (Madres de Plaza de Mayo) from the 1970s, identifiable by their white headscarves, a historical and cultural symbol that remains just as powerful today.

At the beginning of the 1980s, there was the war between Argentina and Great Britain over the Falkland Islands (Islas Malvinas), and the turbulence it caused was in sharp contrast to the wild and sensual hairstyles of the time. Finally, the 21st century began with a devastating economic recession, while at the same time ‘flogger’ fashion was all the rage amongst young people, stemming from the use of Fotolog, one of the first social networks available online.

In the video below, Chris Chan, the editor of the 100 Years of Beauty series, discusses the historical research that was carried out before producing the video, and explains the relationship which developed between Argentina's tempestuous history and how beauty standards changed during the last century:

After watching the video from beginning to end, what stands out to me is that the essence of Argentinian beauty consists in being sophisticated, cosmopolitan, cultured and elegant. However, the video is also about the way in which Argentinian women have used their beauty to look towards the future as well as to remember the past.