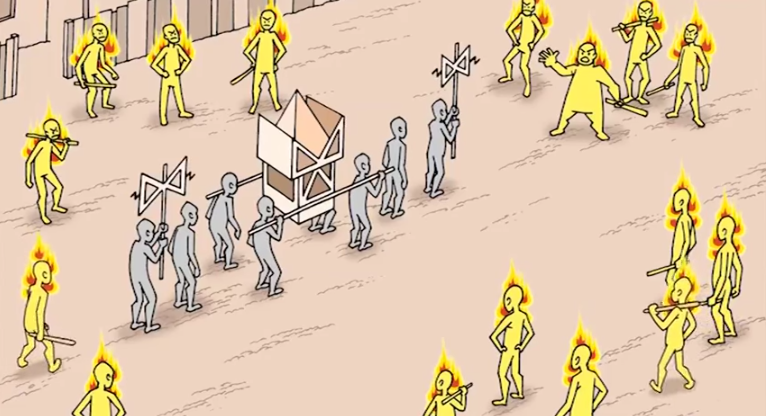 Screenshot of a video warning about the negative social impact of religious discrimination and online hate speech. Source: YouTube

Last year, Global Voices featured the work of Equality Myanmar, a non-government organization which has been producing multimedia materials to promote human rights in Myanmar.

We highlighted five animated videos that explain the impact of violence in communities in a simple yet creative format. The videos also aim to educate viewers on how to effectively challenge oppression and empower the marginalized sectors in society.

We are presenting four more videos that address the need to step-up the information campaign to combat religious intolerance and racial bias in Myanmar.

While Myanmar is embarking on a democratic transition, this process is being undermined by the disturbing rise of religious extremism and xenophobia in recent years.

There have been intermittent clashes between Buddhist nationalists and Muslim minority groups in several communities, especially in the western part of the country. The upsurge in violence has displaced thousands of Muslims and other minority ethnic groups. Meanwhile, hate speech on social media has reinforced bigotry and racial intolerance which further victimized minority communities.

Myanmar civil society groups have launched various initiatives to promote peace, justice, and tolerance. Even netizens are active in countering hate speech. The use of animations is also a useful method to emphasize the mainstreaming of human rights concepts in society.

These videos by Equality Myanmar reflect relevant issues which can be easily understood by viewers. For example, this video about diversity reminds viewers about the role of online misinformation in spreading hate in a community:

In this video, volunteer groups representing different religions are united in distributing relief and assistance to flood victims. It is a simple but powerful reminder that people with different beliefs can live and work together in harmony:

This video explains how discrimination can deprive young people of their right to think freely and creatively:

And finally, this video depicts the struggle of children migrants who are forced to flee their homes. It underscores the need to understand the plight of refugees and the intervention of the state to rescue children migrants from human traffickers. Another threat which the video also presented is the racist attitude of many urban residents: