If you’re a democrat, social democrat, progressive, neoliberal, leftist or, as we call them here in Peru, a “caviar leftist”, you’re not going to like what I'm going to say. If, in spite of that warning, you choose to continue reading, okay, that’s a first step towards breaking out of your bubble. And that’s a good thing.

Over the last few days I’ve been reading in different news media about how horrible the world is going to be now that the election in that faraway land whose fate is nevertheless intertwined with our own was lost by the favorite candidate of those media and the people they write for, and won by the candidate who is practically evil personified. Okay, I know that candidate is far from perfect—the fact that he doesn’t believe in global warming is to me great cause for concern—but he won. Fair and square, as far as we know. If you don’t accept this, maybe it's time for you to review the basic tenets of democracy.

You might say to me that the electoral system of the country in question is imperfect, and that some people would like to change it. Fine—then fight for that change, though bear in mind that you didn’t quibble about the same electoral system when your preferred candidate won. I sincerely believe you should examine your ideas about democracy. And while we’re at it, it might do you some good to review the concept of the political alternance as well. Why? Well, is it such a terrible thing that the other half of the country should have the right to to have a government it favors in power? No? Because I’ve been hearing you ranting and raving about “the entrenchment of power”, and I wouldn’t want anyone to accuse you of looking at the splinter in others’ eyes while ignoring the the beam in your own. 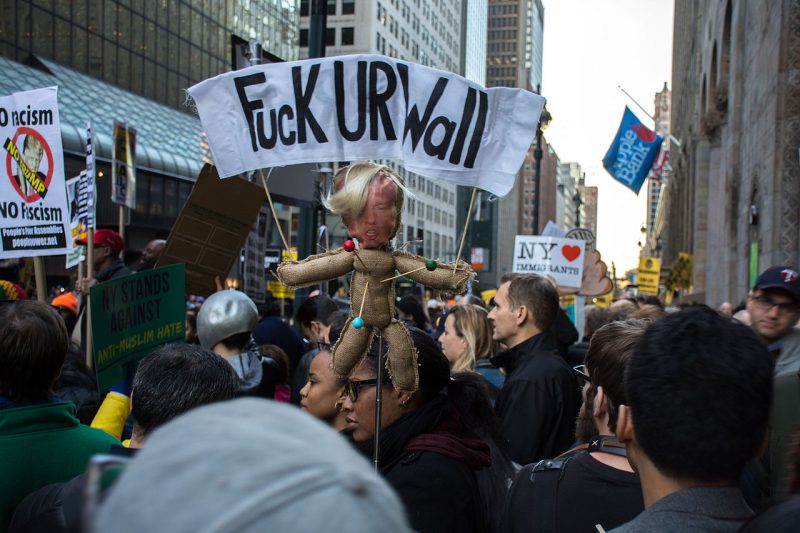 If you looked at the tweet I used as the epigraph for this article it's possible you've already labelled me part of the second group, one of those who get annoyed at other people on account of what they say. Not really—perhaps I’m more concerned than annoyed, for in my view your proclamations about the coming apocalypse do constitute misinformation. Come on, you seem like a serious guy, who, if I recall correctly, knows his journalism and political science, so you know what I mean. You shouldn’t be walking around, tablet in hand, prophesying the coming of the Four Horsemen, because there’s something called a self-fulfilling prophecy and that seems a little like one of those. And it’s not just me saying that, there are others as well:

The unremitting disdain with which middle-class social media users treated Trump from the beginning of the campaign bolstered his power. The trivial superciliousness manifested in jokes and ironic quips only ended up energizing the magnate's performance…. While waging their campaign of jokes and parodies in support of Hillary and propagating them endlessly through social media, they never stopped to ponder the things this crude man embodied for his constituency.

So in other words, in case you still don’t understand, it was your misunderstanding of your own fellow voters that brought you to where you are today. Obviously those who waged the losing campaign are in the same situation, or worse. There's much that can be said, but in the end the thing that matters is winning, not losing. And you lost. Yes, I know you have travelled the world, that you have the fought on behalf of the defenseless in distant countries, that you are well qualified. But maybe you don’t quite understand your immediate environment. Perhaps you, as happened to me once, let yourself be dazzled by the big city lights and failed and became blind to other things, to the things hidden in the interstices along the way, hidden in those dark corners where light doesn’t shine.

And it wasn’t only you: your media also failed, they didn’t see the reality either. Whether out of conviction or convenience, their interpretation of reality was biased, incomplete, just plain wrong. Read this, for example:

Did the “shock” half the world’s news media described yesterday with such bombast really exist? Perhaps, just perhaps, the “shock” touched only half the US population, given that the other half voted, knowingly, and probably with great relish… Journalism, at one time so cozy with society, is increasingly disconnected from the communities it reports on. And that’s because it only reports on half of the society. The other half it systematically ignores.

It’s worth asking why this happened, including in cases where things were done in good faith. With all due respect, I believe it is has to do with class. According to this commentator:

The main reason that national media outlets have a blind spot in matters of class is the lack of socioeconomic diversity within their ranks. Few people born to deprivation end up working in newsrooms or publishing books.

But still, don’t be depressed. In the end you will see that your supposed Antichrist probably doesn’t possess sufficient power to open the gates of hell. Because remember the balance of powers? Those checks and balances? Life will go on, as this article humorously suggests:

The chances of Donald Trump doing serious damage to rights and freedoms as a whole are scarce, if not non-existent. Beyond, that is, a few cosmetic and ultimately inconsequential alterations… The US will also survive Donald Trump and at the end of his mandate the country will continue to enjoy unemployment levels close to zero, a per capita income much, much higher than Spain’s, and will lord its cultural, economic, military and scientific might over all the other countries on planet Earth. In other words, the four pillars that sustain all empires.

At the very least—and this is a fool’s consolation—I don’t think you are as bad as the progressives of my own country, whom I fear are never going to come to terms with the fact that the president-elect, who's practically a member of the extreme right, will annul the Trans-Pacific Partnership and other treaties they have long refused to recognize. Will they thank him for that?

So yes, politics is a strange beast, but treat this as opportunity to practice looking at things with your theoretical and academic blinders off. It’s your turn to step in shit, as they say. But you will see that, like any good shit, it will fertilize your brain and open it up to the real world. I wish you luck.