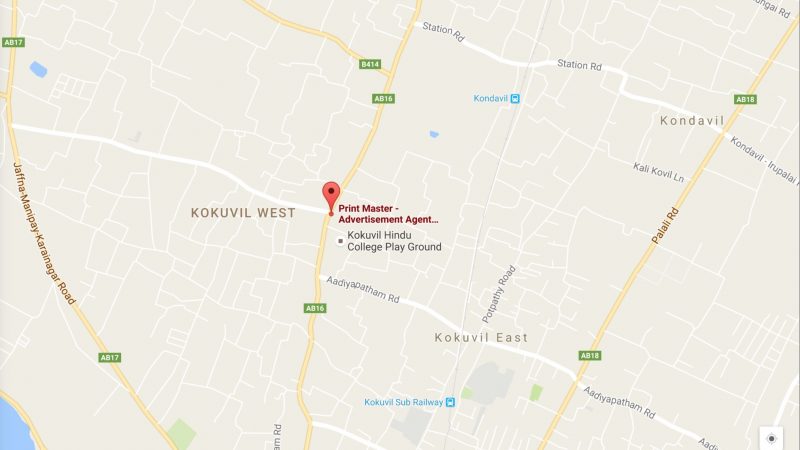 This post [2] by Raisa Wickrematunge originally appeared on Groundviews, an award-winning citizen journalism website in Sri Lanka. An edited version is published below as part of a content-sharing agreement with Global Voices.

On Monday October 24 and Tuesday October 25, 2016, Police Inspector General Pujith Jayasundera’s mobile number, given out to the public [3] just months before, rang unanswered.

The reason for the call was the shooting of two youths, 23-year-old Natarajan Kajan and 24-year-old Pounraj Sulakshan, who were traveling by motorbike when police asked them to stop at the Kulappidi Junction roadblock in Kankesanthurai [4] of Jaffna District, Northern Province, Sri Lanka.

When they didn’t, gunshots rang out. The police spokesman acknowledged to the media that the post mortem report found bullets lodged [5] in one rider’s body — even as the police tried to claim it had been an accident [6].

President of the Jaffna University Arts Faculty Students’ Union, K. Rajeevan, spoke to sister paper Maatram [7] about how the police had initially attempted to cover up the incident. Rajeevan said he was not in Jaffna at the time, but had gone to the hospital later on.

While the police had initially asked for two students to come with them to the hospital to identify Gajan and Sulakshan, they never showed them their bodies, Rajeevan said. Up until the afternoon, the police claimed it had been an accident.

It was only in the evening that the police told Kajan and Sulakshan’s parents that they had made a grave mistake, acknowledging that there had been shooting involved. The police had offered to pay for funeral expenses, Rajeevan said, adding that they had also pressured the families to hold the funerals quickly.

Five police officers were immediately remanded when, thanks to the coroner, these facts came to light.

Early reports indicated that the students had sped past without stopping for police [8], who then opened fire. The rider of the motorcycle, Sulakshan, was shot several times, losing control of the motorcycle, which slammed into a parapet wall causing serious injuries to Kajan, who died shortly after.

In the wake of the deaths, there was widespread outrage. Over 2,000 students from Jaffna University blocked the A9 road, before submitting a list of demands. Click below to read the list in full:

“If the police do this, who do we get justice from?” Rajeevan asked.

Meanwhile, the president of Sri Lanka called for compensation for the families, and for an impartial inquiry:

I learned with grief the news of the deaths of two Jaffna University students. Ordered compensation and an immediate independent inquiry.

This in itself made social media users incredulous, given the implications:

What does it say about a country when its executive president has to instruct the police to do an impartial investigation of a crime?

Kajan and Sulakshan were students at Jaffna University's Arts Faculty — a quiet, shady building with an open quadrangle. Sulakshan was an aspiring actor, participating in a comedy sketch called “Ulcer [15]” for The 48 Hour Film Project [16] competition.

The day after the funerals of the two students, Jaffna city was empty as the citizens declared a hartal [17] (general strike).

Despite this, former government minister Mervyn Silva said that people had been “too quick to rush to judgment [21]” of the police officers.

“I too would stop at a road block, if asked,” he said to the media.

The unspoken question was, if the former minister chose not to stop for whatever reason, would the policemen then open fire?

In parliament, Law and Order minister Salgala Ratnayaka read out the police's version of events, which was that they had shot the students “while trying to fire in the air [22]”.

To many, the police’s actions were not just questionable, but also to be condemned. “The police acted irresponsibly, and we hope this incident can be logically decided by the courts,” Minister of National Coexistence Dialogue and Official Languages, Mano Ganesan [23], said. He pointed out that the police were equipped with 1000 cc motorcycles, which could easily have outstripped the motorbike the two students were using.

Minister of Parliament for the Tamil National Alliance, M A Sumanthiran, [24]pointed out that it was the driver of the motorcycle who was shot, not the pillion rider, indicating that the shots had been fired from in front. This could have occurred if, when Kajan and Sulakshan didn’t stop, the police in front of the roadblock had opened fire. “The student community is outraged. Not just in Jaffna but all over the country. Even the southern universities have joined and expressed their concern,” he added.

This sentiment was echoed by members of civil society. “What sickens me most is that right from the outset, the police have been trying their best to cover up or justify their heinous and negligent actions,” activist Marisa de Silva [25] said.

“The police is where people turn when they’re in trouble. We trust the police with our safety and see [them] as [a] source of protection. This is why it’s so important that the police earn young people’s trust. However, many incidents that have taken place over the years have made young people extremely skeptical of the police as an institution,” noted Senel Wanniarachchi, a member of the youth group Hashtag Generation. [26]

The line between outrage and violence soon began to blur. In Kilinochchi, there were stand-offs between the public and the police [32]. In Jaffna, three youths were reportedly hospitalized after an attack by unknown assailants.

It is undoubtedly important that calm be restored, and that no further violence breaks out. However, the protests, which spread from the north to the south, are worth reflecting on. They are not just statements of solidarity — they reflect a truth few are willing to speak openly about.

Police brutality is by no means restricted to the north of the country — in Weliweriya [34] in 2013, for instance, villagers protesting water shortages were shot at by the army. It took three years [35]for a magistrate to declare the shooting a crime. In Pasyala in 2014, Subhash Indika Jayasinghe was shot dead [36]by police officers, also during a traffic stop. The Asian Human Rights Commission [37] called for an independent investigation into the incident. In Divulapitiya, 19-year-old S.M. Kelum Subasinghe was shot on his way home from a wedding reception — although, in that incident, he had reportedly [38] tried to stab the police constable who had asked him to stop his vehicle.

The National Police Commission has reportedly [39] received 752 complaints against the police in just three months — from October 21, 2015 to January 2016. Most of these complaints show partiality, abuse of power, and police inaction — yet, the Commission’s hands are tied, as it has the mandate only to act on internal matters, not on human rights violations.

The reason the protests are so far-reaching is because police brutality is a phenomenon felt all across Sri Lanka, during both traffic stops and questioning [40]. In that sense, Kajan and Sulakshan have become tragic symbols to a wider problem that is yet to be addressed.

This post [2] by Raisa Wickrematunge originally appeared on Groundviews, an award-winning citizen journalism website in Sri Lanka. An edited version is published here as part of a content-sharing agreement.