In Paraguay, Many of the Country's Poorest Girls Undergo Slavery Just to Receive an Education 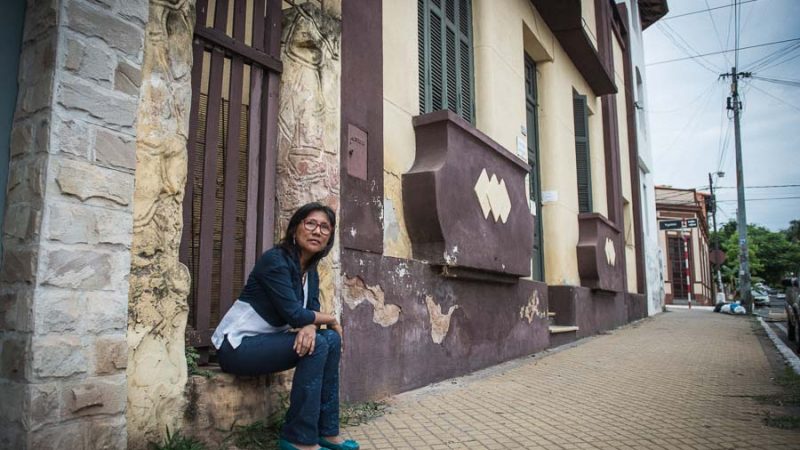 Tina Alvarenga, who was a criadita in her childhood, visits the house that she worked in for years. Currently, Tina works to defend the rights of children and gathers testimonies of criaditas who, like her, were victims of abuse and discrimination. Photo by Cecilia Rojas, published with permission from Kurtural.

This post is a shortened version of the article written by Kurtural and is published on Global Voices with permission from its authors. Likewise, the text forms part of the series, “Vacas que vuelan, escuelas que caen” (“Cows that Fly, Schools that Crumble“), which will likewise be republished and re-edited by Global Voices Latin America.

Tina Alvarenga lived eight years in a house where she was forbidden to eat with the household family. Nearly a college graduate, she returned years later and listened to the mistress talk about her with pride. “She is like our daughter, the one who has turned out better,” she said. But Alvarenga was never treated like a daughter in that house. Starting when she was ten years old, she was the family's criadita, a word used in Paraguay to describe the more than 46,000 boys and girls who are forced to work in order to be able to attend school.

The deal is simple: a large family with little money hands over their underage son or daughter to another more wealthy family, in exchange for the child receiving food, education, and a roof over their head. What is not said is that the boy or girl will have endless days of domestic work, work that is never paid, and may suffer abuse or mistreatment, all under a contract that cannot be annulled. This is known as criadazgo, a prevailing practice within Paraguay due to the complicit acceptance by a good chunk of society and despite various complaints from human rights organizations.

After finishing her undergraduate studies, Alvarenga worked for years for an organization that defends the rights of boys and girls. She interviewed criaditas (young girls trapped in criadazgo), gathered testimonies, researched and denounced. She tried to call things as they are, because the feeling of gratitude instilled in criaditas is, in general, a guarantee of silence.

“Criadazgo is supported by a double illusion,” says Alvarenga. On one hand, there is the illusion of the family that delivers their daughter over to another family, thinking that, thanks to this act, she will be able to finish her studies, better her social position, and “be someone in life”. On the other hand, the family that receives the daughter justifies her exploitation by believing that they are giving an opportunity to someone who otherwise would not be able to study and even might have starved to death.

If the girl is mistreated, her family members will not know of it until many years afterwards. Sometimes, they never find out. But in January of 2016, an event put a face to this hidden phenomenon that happens within the houses of Paraguay.

Carolina Marín was admitted to Caaguazú's Regional Hospital with signs of having received a fierce beating and died soon afterwards. She was 14 years old. She was a criadita in the house of former military man Tomás Ferreira and Ramona Melgarejo, an official for the Civil Registry. Marín was living with them in Vaquería, a locality of little more than 3,000 inhabitants located some 250 kilometers east of Asunción. At the end of January 2016, Ferreira beat Marín with a branch until he killed her. It was the last punishment the teenager ever received.

A few days later, the media disseminated news of the incident. They emphasized how the murdered minor was a criadita. Organizations, such as UNICEF or Callescuela, blamed the death on the unshakable tradition of criadazgo. They called it “a modern form of slavery”. Dozens of people gathered together in protests, demanding that there not be “another Carolina” in Paraguay. The teenager's name and photos went viral via social media.

“In Paraguay, there are more registered cows than children,” complained Tina Alvarenga. Without identification, it is easier to violate children's rights with impunity. Without such records, it is difficult to control the conditions in which a boy or girl lives.

The couple’s neighbors, along with almost 60 civil society organizations, are calling for swiftness in the investigation of the case. They want Tomár Ferreira and Ramona Megarejo to serve 30 years in prison for the homicide of the girl who was their criadita. If the legal process continues, the case of Carolina Marín could become a landmark one — the first time that criadazgo is judged in Paraguay. 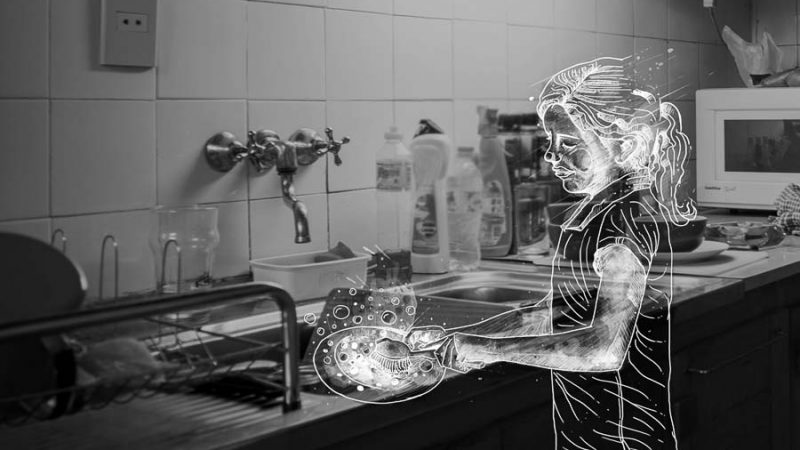 In addition to labor exploitation, many criaditas also live isolated from other girls their age.

Tina Alvarenga was ten years old when the factory where her father worked went bankrupt, leaving him unemployed. All of her brothers were put to work in order to bring money into the house, selling sweets in the streets or in the market. All of them continued studying at school. Only she became a criadita in Asunción.

In her employers’ house, Alvarenga worked between four to six hours each day, and also had to measure the amount of time that she had to dedicate to studying. She woke up around five in the morning and prepared breakfast for her patrons, then began cleaning. Every day of the week had to be dedicated to cleaning and organizing a different part of the house. On Fridays, for example, she cleaned the refrigerator and the living room, polishing the furniture and disinfecting the floor. Afterwards, she went to school.

When school ended, she would return home and have time to study. The sooner she finished studying, the more free time she would have; yet this also was limited, since she had to make dinner for her patrons. Alvarenga says that although she never went hungry, her food was limited. “I had more access to the master's library than to the refrigerator,” she recalls.

The library was well-stocked and belonged to the owner of the house, a military sympathizer of the Liberal Party, the opposition party to the dictator Stroessner (who ruled between 1954 and 1989). Some nights, after dinner, the master would compel Alvarenga to stand by his side and read oppositor newspaper editorials such as “Sendero” or “El Pueblo,” and persuade her not to believe what the official media said regarding the dictator's regime. He considered her intelligent, but did not converse with her. “The master had found someone who would listen to him talk about politics,” she says.

“They did not let me go to my own home very often, because they said that I would return with ‘the bad habit’.” This was in reference to how she would speak in Guarani, her maternal tongue, since she is an indigenous Guarani. Her patrons feared, she explains, that she would lose the education that they had given her. All the same, she was perfectly aware that all that they provided for her was paid for by her own hard work.

Discrimination against Alvarenga carried over into school as well. “One of the things that is least spoken of is bullying, of the harassment that criaditas suffer when they go to school. Since other children have parents, they immediately realize that if you don't have them, then you are a criadita. “I couldn't invite anyone over to the house where I was living, I didn't have my own group of friends at school or among my neighbors. In my adolescence, which is when friendships are formed, what I felt most keenly was that I didn't belong to a group. Of everything, the isolation was the worst part,” Alvarenga explains.

A system endorsed by society

In January 2015, a woman published this text in a Facebook group where people share employment advertisements for professional cleaners and nannies in Paraguay. The group administrator is Pepa Kostianovsky, a city councilwoman for Asunción Municipality.

Hello, I need a little companion for my darling, to play with her in the morning and in the afternoon. In order to study. Please notify. By Monday if it's possible.

The announcement received five “Likes” and various comments. One woman from the city of Ñemby said that she had an eleven-year old girl and gave her phone number. Another woman, also from Ñemby, offered her 15-year old niece. “She likes the little ones and is very pretty,” she wrote. A third comment spoke of “an inland girl that wanted to work”. In the midst of the number of replies, the author of the ad intervened:

Friends, I found one, I am going to see if she works out. Many thanks, I will notify again if anything.

The transaction was closed.

Ortiz wrote in the prologue to Criaditas, ¿hasta cuándo? (Criaditas, Until When?), a collection of testimonies from ex-criaditas:

If throughout our history we have been capable of ending systems like slavery, cuñadazgo (a practice in Paraguay's early history in which the Spanish conquistadores enslaved Guarani women as their “wives”), las encomiendas (in which Spanish citizens were rewarded with Paraguay natives, who would be forced to pay them tribute and undergo Spanish indoctrination), or the mensú (a laborer who was considered a semi-slave), it is unjustifiable that we continue to accept with pleasant complicity the servitude that faces so many girls and boys in a system of slavery, opening them up to all types of abuses and exploitation.

Both Paraguay's social inequality and power show-off are clues to understanding the validity of this phenomenon known as criadazgo.