America, I Used to Love You 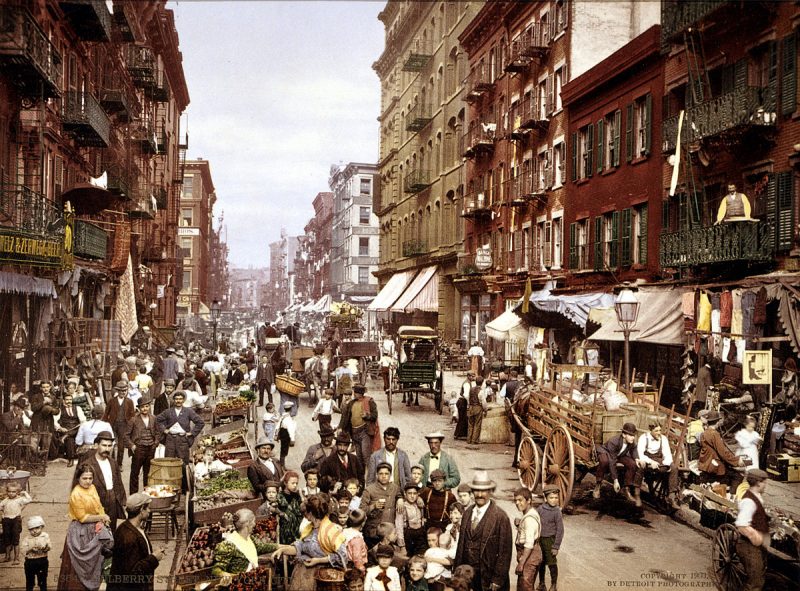 “Millions around the world treasure the American ideal   that whatever your creed or background, America will welcome you.” Multi-ethnic, multicultural Mulberry Street, New York City, circa.1900. PHOTO: Public Domain by the Library of Congress (via Wikimedia Commons)

Dar es Salaam, Tanzania — Two years ago, I flew from the coast of East Africa and landed in Phoenix, Arizona, to take up a journalism fellowship at Arizona State University’s Walter Cronkite School of Journalism. While I had been visiting the US at least once a year since 2012, this was going to be the first time that I would live there. And it was an exciting moment for me.

My affection for America runs deep. Like many of my generation, I grew up watching American movies, dancing to her music, reading her writers and playing her sports. In fact, the country has had such a profound impact on me that I became a journalist in large part because of an American film. As a 14-year-old, I saw the great Denzel Washington play Gray Grantham in “The Pelican Brief“, a fearless reporter, who, with the help of Julia Roberts’ law student, exposes a murderous conspiracy by an oil magnate to stack the US Supreme Court with justices friendly to his interests. I was hooked. To paraphrase Method Man, “I was, like, this is the truth, forget everything else, this is what I’d like to do with my life.”

And the year I lived in Arizona only served to confirm my admiration for the US. I would say to people, “America is the only country I have ever lived in whose diversity was so welcoming that you can be exactly who you are and easily find acceptance in a community of like-minded people.” I even penned a love letter, waxing lyrical about her greatness.

Much has been written about the man’s xenophobia and racism. To me, the most extraordinary aspect of his rise is how easily he wears his bigotry. He doesn’t dog-whistle, to borrow a turn of phrase. He straight-up uses a regular human whistle, as a former colleague put it, and openly declares his disdain for Muslims, Latinos, African-Americans and women.

Yet people have responded to his message, voting for him in droves. The 13 million votes he secured to win the Republican primary was the highest number garnered by a party nominee in history.

I was dumbfounded. Who are these Americans supporting this bigot, I asked myself?

I couldn’t square Trump and his voters with the folks I got to know during my time in Phoenix. Like my professor, Dr. Bill Silcock, director of a journalism program that hosts people from all over the world, and a deeply spiritual man, with whom I would talk about Islam and its history.

Nor did Trump’s worldview match with Peter Bhatia, now the editor at the Cincinnati Inquirer. Bhatia and I bonded over our shared love of hoops and spent countless hours watching the Phoenix Suns play.

Trump’s intolerance is also at odds with the generosity I experienced spending time with Sandy Bahr — a life-time advocate for the environment — and her husband Dave, my host family, who treated me like a son. Nor did it match with the dedication of Kristi Kappes, who patiently, and always with grace, helped me and my colleagues better adjust to the complexity of life in America. Then there's Andrew Leckey, Kathryn McManus and Retha Hill, my mentors, whose wise counsel helped my career advance.

These people and the values they embody deepened my love for America.

So even as Trump was barreling his way to the Republican nomination, they provided me with a counterpoint to his narrow vision of America.

It turns out they were the exception rather than the rule.

On November 8th 2016, over 50 million Americans, mostly white, handed the presidency to a man, despite—or maybe because of—his contempt for non-white people.

Coming to terms with the idea that people voted for Trump either because they shared in his racism and bigotry, or that they were willing to overlook those things, is soul-crushing.

Perhaps it is unfair to call Trump voters racists. A friend of mine says labelling people like this is what has led to this moment. It is flippant and dismissive, and suggests an inability to understand those who think and act in ways different from us. It says to folks that their concerns and fears about the frenetic changes happening in their communities are not valid. Could it be that these voters, most of whom are white, chose Trump as a way to re-assert control over a country they may believe is leaving them behind? In other words, was it their way of saying, we still matter in this new America?

Perhaps. Yet, one cannot escape, in David Remnick's words, the cruelty of the decision to elevate a man who drips with disdain for those who don't look like him.

This “whitelash”, as the great Van Jones put it, has killed the very thing that makes America great.

Millions around the world treasure the American ideal — whether myth or reality, it is a powerful idea nonetheless — that whatever your creed or background America will welcome you. After all this is a country that chose as its president, twice, the son of a Kenyan, whose story, as he tells it, is possible nowhere else in the world. By electing Donald Trump, however, a huge chunk of white America is abandoning that promise and telling the world: fuck diversity, religious freedoms and the whole notion of pluralism. In post-11/9 America, the white man is back in charge, they said.

In all this, I have been thinking about Khizr Khan, the father of a soldier who died in Iraq, and what he said on the eve of the election. At a rally for Hillary Clinton, Mr. Khan engaged in a call-and response with the crowd.

“Donald Trump, would my son Captain Humayun Khan have a place in your America?” Mr. Khan asked.

The audience responded with a resounding, “No!”

“Would Muslims have a place in your America?”

“No!” the crowd bellowed.

“Would Latinos have a place in your America?”

“Would African-Americans have a place in your America?”

“No!” they said, their voices growing louder.

“Would anyone who is not like you have a place in your America?”

He got a unanimous and vociferous, “No!”

Mr. Khan concluded by saying, “Thankfully, Mr. Trump, this isn’t your America.” 36 hours later, Mr. Khan has been rebuked. The country for which his son gave his life had sent him a message. This is now Trump’s country, the message said. And people who look like Mr. Khan may not have a place in this new America anymore.

And that breaks my heart.

Omar Mohammed is the current ICFJ's Knight International Journalism Fellow and a Code for Africa Lead in Tanzania, a continent-wide civic tech and data-journalism initiative. He is based in Dar es Salaam, Tanzania's commercial capital. Follow him on Twitter @shurufu.