The Caribbean Considers a World Where Donald Trump Is President 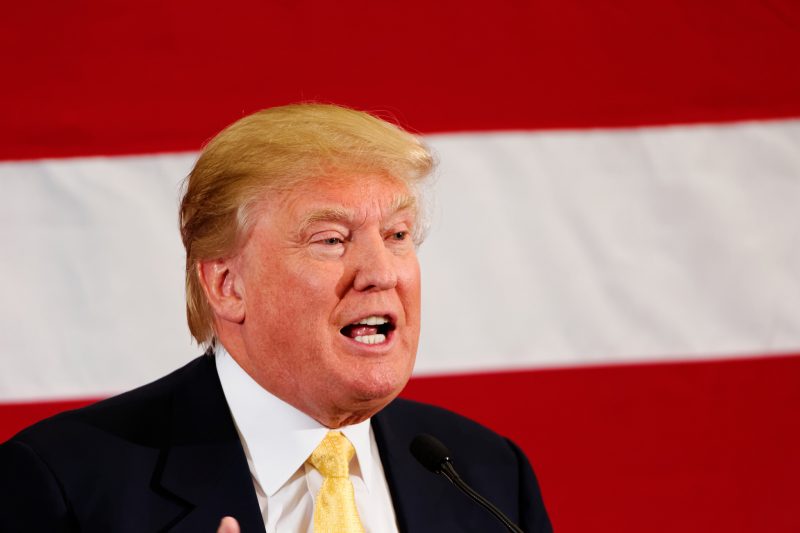 It's official: Donald Trump will be the 45th president of the United States. South of the border, where there is a saying that if America sneezes, the region catches a cold, Caribbean netizens have been posting their reactions to the outcome of the 2016 US presidential election.

Given the now president elect's rhetoric on the campaign trail — from his description of Mexicans to his attitude towards Muslims — it is fair to say that the majority of Caribbean netizens perceived Trump to be prejudiced, xenophobic, misogynistic and divisive. Overwhelmingly, this election campaign appeared, at least to the people of the region, to be primarily about race (though there were some arguments that it was more about class). Trump's victory was therefore a confusing and disturbing one for many Caribbean-based social media users, who could not quite grasp how America could have voted for someone who so openly peddled such intolerance.

Trinidadian Facebook user Brigette Joseph wondered if she was dreaming, saying, “What riles me up the most of all, is that Trump has validated all the feelings and opinions of misogynists, racists, xenophobes and bullies everywhere.”

For Karen Martinez, a member of the Caribbean diaspora who lives in London, the Trump victory was too much of an isolationist statement for her to stomach, especially coming fresh on the heels of the United Kingdom's Brexit vote to leave the European Union:

Sad sad sad and ANGRY! As someone else mentioned, when Trump said he wants to make America great again he really meant he wants to make America WHITE again! So very scary. He and his supporters forget (or don't give a shit) that the original people were Native Americans. Whites are the immigrants. This place doesn't ‘belong’ to anyone we are all here to look after this planet and our fellow human beings. This result threatens our humanity. That is all.

Indeed, one Trinidad-based activist, Rubadiri Victor, referred to the outcome as “Brexit squared” and had no trouble calling Trump's election a nod to white supremacy. He also predicted that a Trump presidency would be marked by “deportations, immigration rigging, incarcerations, and voter suppression […] systemic overturning of civil victories and a tearing down of all types of gains”, and chastised the Democrats for choosing Hillary Clinton as their candidate over Bernie Sanders, who he believed stood more of a chance of beating Trump.

‘It is the season of oppression, dark metal, and tears’

Many other social media users shared this view. Victor suggested that the Caribbean response should be to “create self-sustaining yet inter-dependent Maroon Republics where we see about our core institutions like Education, Culture, Memory, Healing, Agriculture, Housing, Science and Tech, etc… It is going to get DARK. Time to get busy with the LIGHT!”

Victor was not alone in seeing the storm clouds gathering. Actor Michael Cherrie posted an excerpt from a verse by Guyanese poet Martin Carter:

This is the dark time, my love,
It is the season of oppression, dark metal, and tears.
It is the festival of guns, the carnival of misery
Everywhere the faces of men are strained and anxious […]

I'm finding it difficult to string coherent sentences together. I am in deep fear. I lived through the uncertainty of the Cold War where as a student you felt ‘what's the point’ as it was believed the world was heading to war. Apart from that is his antagonistic stance on NAFTA and Climate Change. I fear there is another financial tsunami coming. I fear …

Lesley-Ann Noel, a University of the West Indies lecturer and Fulbright scholar who is studying in the US state of North Carolina, couldn't fathom “how we are supposed to just carry on as normal”. She is part of an online group of liberal mothers who are now concerned about explaining this new reality to their children, as well as how to navigate, as people of colour, Trump's brand of America. Noel added that some of her black friends chose not to go to school the day after the election — they just didn't feel up to it.

Keith Francis, meanwhile, admitted that he was more concerned about Trump's running mate than he was about Trump himself and wondered what effect — if any — his victory would have on “the criminal and civil prosecutions that Trump is supposed to be facing”.

‘Hillary lost because she is a wretched corrupt politician’

But other Caribbean people were just as concerned with the controversies surrounding Hillary Clinton. Haitian-American Pascal Robert explained:

Clintonian ‘Third Way’ Politics and triangulation started with Bill Clinton in 92 and continued with Obama through both his terms was completely rejected by the American people last night. The most horrid and damaging political world view this country had ever seen, which YES did more damage to this nation than Ronald Reagan, was killed last night, and for that reason alone I am content.

Nothing Donald Trump has said was worse than the nations Hillary Clinton actually destroyed. Trump was a mis-handler of words, Hillary was a mis-handler of national power. If you thought Trump was more dangerous than Hillary you know little to nothing about world events and politics and shouldn't even be talking. Hillary Clinton caused the greatest refugee crisis in modern history because of her and Obama's policies in Libya and Syria.

Clinton and her husband ran a criminal slush fund called the Clinton Global Initiative that peddled influence for money and used their influence to rob countries like Haiti while Hillary also supported a coup in Honduras. The e-mail scandal alone should have put Hillary Clinton in prison. Bottom line. Hillary lost because she is a wretched corrupt politician who was running in a year where people were tired of the status quo after eight years of the Bank protecting con game called the Obama presidency. For that reason I am content.

Robert's compatriot Alice Backer, the founder and former manager of GV Lingua who now works as a lawyer in New York, agreed. While Backer was a Jill Stein (Green Party nominee)  supporter, she told Global Voices:

Right now people are in a panic and that's understandable. Remember, however, that the Wikileaks themselves revealed that Hillary's campaign preferred to run against Trump as they thought he was the great foil to their ‘lesser evilism’ strategy. And yes, Trump is the embodiment and mascot of the disgruntled, rust belt, de-industrialized male. But what Trump did right, it must be said, is that he actually reached out to the Haitian community in Florida where 300 votes or less separated Bush and Gore in 2000. He visited Little Haiti and echoed the Haitians’ rightful anger at the Clintons. In Little Haiti, he said: ‘I will be your voice.’ He then followed up with a mention of the Clinton Foundation's misdeeds in Haiti at the last presidential debate — something even Bernie Sanders never did. And the alt right and libertarian media went along with him and echoed the Haiti story in a way the liberal mainstream media — which leaked emails show was in the tank for Hillary — would not. So he not only tapped into the anger of the white disgruntled male, but also into that of other victims of Clintonian neoliberalism and vulturism, Haitians included.

Haitians had every reason to be untrusting of Hillary Clinton: her husband has admitted to destroying Haitian rice farming, thanks his neoliberal trade policies of Arkansas rice dumping in the 1990s. This was a huge blow to Haitian agriculture, which has never quite recovered. Even after the former President Clinton's apology, the practice has not only continued, but expanded into peanut dumping. Just as disturbingly, Ricardo Seitenfus of the Organisation of American States (OAS), who was dismissed from his position after exposing the truth about NGO aid, as well as the source of the cholera outbreak in Haiti after the 2010 earthquake, said that Hillary Clinton's state department rigged the 2010 Haitian presidential election for Michel Martelly. Her state department intervened once more with Haitian politicians, convincing them to drop a plan to increase the Haitian minimum wage to 62 cents an hour.

As for those who may feel that Trump's racist rhetoric should have been enough to keep him out of the White House, Backer argued:

Neither president was going to solve issues of white supremacy for black people. Only we can do that through our advocacy and movements. Black people — not a US president — brought us the civil rights movement.

Both Clintons championed the 1994 Crime Bill which catapulted the incarceration of blacks in US into the stratosphere. We now have a larger prison population than China, predominantly black and Latino. The Clintons also gutted the safety net of poor black families during that same period. Imagine the dislocation these policies wrought into black families. It's simply delusion to think that Clinton cared for black lives as much as she cared for black votes.

To many, though, Clinton appeared to be the saner choice. Trinidad-based website Wired868, which offers clever, cutting satirical commentary on politics and sport, tried to dissect Trump's triumph:

Pointing the finger of blame at the judgment of millions of Americans—or questioning the racial tolerance of more than half of the country—might also be short-sighted. This is, after all, a country that recently voted for Barack Obama. Twice! […]

Obama, as he stumped for Hillary, insisted that his Democratic successor was the most qualified candidate ever for the job of US president. Clearly, that was a double-edged sword. At a time when distrust of politicians is at an all-time low, promoting her credentials as the ‘supreme politician’ might have been an own goal.

The public would rather trust a buffoon than a politician at the moment. And they proved it.

For other social media users, humour was the only way of dealing with the election result. Some posted memes, like this one of a despairing Statue of Liberty: 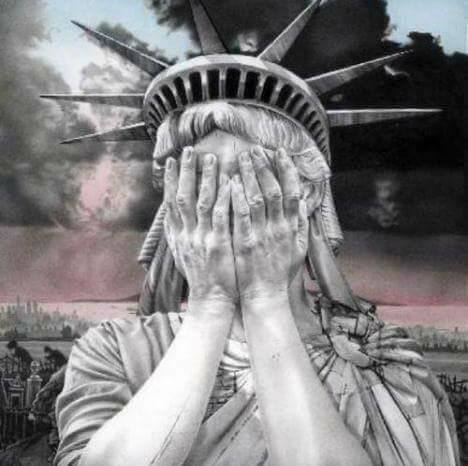 Meme of Lady Liberty's reaction to the outcome of the US presidential election; widely shared on Facebook.

Trinidadian artist Darren Trinity Cheewah created and shared this image, in which Obama gives the finger to the president-elect:

He also doodled another image in which he poked fun at Trump's insistence that he was not a mouthpiece for Russian president Vladimir Putin: 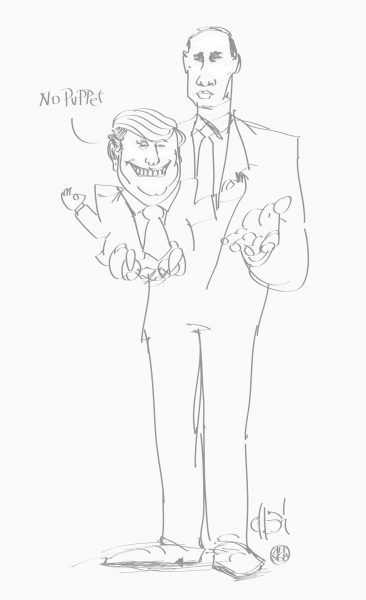 Look out for your pussy!

But Jamaica-based blogger Annie Paul was not at all surprised, reminding her followers:

I’ve said from the get go, from long before he won the Republican nomination, that this man would be President #Trump

Finally, journalist Franka Philip, who viewed Trump's upset as a sign that the mainstream media — and pollsters — were out of touch with the citizenry's level of dissatisfaction, had a healthy sense of detachment:

I'm not getting my pressure up over a Trump win. I live in Trinidad and Tobago and there is enough here for me to worry about. Let us do our thing for sweet T&T.