How Japan Is Reacting to Donald Trump's Presidential Victory 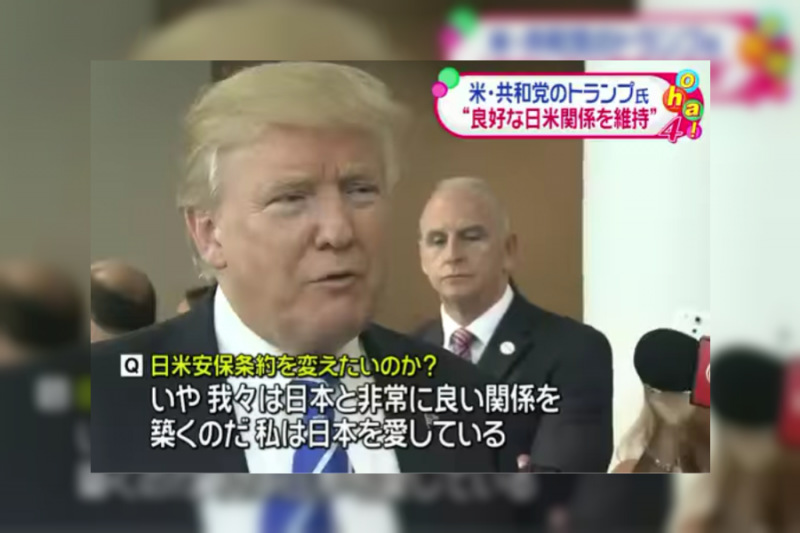 Trump's remarks made it on Nippon News Network (NNN) from August 27, 2015: “We're going to have a great relationship with Japan. I love Japan.” Screencap from video uploaded to YouTube.

During the 2016 US presidential election campaign, Japan was one of the many countries singled out by Donald Trump for special attention, complaining about the Asian country's supposedly unfair trade practices. According to the New York Times, Trump's “complaints are reminiscent of another era, when Japan’s economy was booming and its companies were buying trophy American assets like movie studios and Rockefeller Center.” A Japan Times opinion piece from August 2016 characterized Trump as being “stuck in a 1980s time warp.”

Based on reality or not, Trump's provocative comments have struck a nerve in Japan. While Japanese Prime Minister Abe Shinzo is expected to meet Donald Trump in New York on November 17, no one in Japan knows what the future may hold now that Trump has been elected president.

Here are a few of the biggest concerns in Japan with a Trump presidency, based on what was trending on Japanese Twitter immediately after the election results were announced on November 9.

When it became apparent Trump would claim the presidency late in the evening in the United States and at the start of the trading day on the other side of the Pacific Ocean, the Nikkei stock exchange plunged while the yen surged.

President-elect Donald Trump has also promised to block or repeal the proposed Trans-Pacific Partnership (TPP). Signing the TPP has been a key policy objective of Japanese Prime Minister Abe Shinzo. Now the fate of the TPP is unclear.

TPP threatened by Trump win: Now that Donald Trump has won the American election, the passage of the TPP agreement looks to become challenging. Trade liberalization spearheaded by the United States is headed for a major pivot.

Many fear that Trump's stated opposition to the TPP will have severe consequences for “Abenomics” — an ongoing series of policy initiatives championed by the Abe government to reignite growth in Japan — and the Japanese economy. The immediate consequence of Trump's election was endaka (円高), or a surge in the Japanese yen that cripples Japan's export-focused economy.

With a Trump victory and difficulties ratifying the TPP, Abenomics has been dealt a mortal blow.

Now that Donald Trump has been elected president of the United States, it will be extremely difficult to ratify the Trans-Pacific Partnership. The yen has surged on world financial markets.

Defense ties with the US

Japan has had strong formal mutual defense ties with the United States since 1960. Japan pays for and hosts the American military in the western Pacific, but Trump has said Japan must pay more.

Questioned by Japanese reporters in August 2015, Trump stated, “We're going to have a great relationship with Japan. I love Japan.” Trump then told Japanese reporters he had no intention of altering the Treaty of Mutual Cooperation and Security between the United States of America and Japan, known as the Anpo (安保) in Japan.

Following news of Trump's win, Japan's defense minister promised to work with the new president. One Twitter user interpreted the defense minister's remarks to mean that the Japanese military will expand.

I love the smile on [Japanese Defense Minister] Inada's face. It's time to grow the Japanese Self-Defense Forces!

“As Trump is declared President, Japanese Defense MInister promises to strengthen the alliance.”

US bases in Okinawa

About 20 percent of Okinawa is devoted to military installations, and there are more than 100,000 Americans present in Okinawa, whose population is 1.4 million; they mostly are either military personnel and their dependents or Department of Defense civilian employees.

There has long been opposition to American bases in Okinawa, and Trump has said he wants to pull American forces out of Japan.

Trump elected US president: What happens to bases in Okinawa and US policy towards Japan? Two reporters weigh in.

Now that Trump has been elected President, the outlook for Japan has become extremely challenging.

Japanese people are getting acquainted with Trump

Now that a Trump has been elected, Japanese people, typically removed from the day-to-day happenings of American politics, are starting to acquaint themselves with the American president-elect.

To do its part, NHK, the national public broadcaster, prepared a mini-site devoted to Trump's election, with documentary video.

Donald Trump elected as US president:

US media called Trump's victory an “upset win.” This documentary website explains how it happened.

A foregone conclusion the whole time?

One Japanese Twitter user discovered an AFP story from China that suggests a Trump win over Hillary Clinton was a foregone conclusion:

November 4th: A monkey in China predicts a Trump win.