After Three Years, Thousands of Haiyan Survivors in the Philippines Are Still Homeless 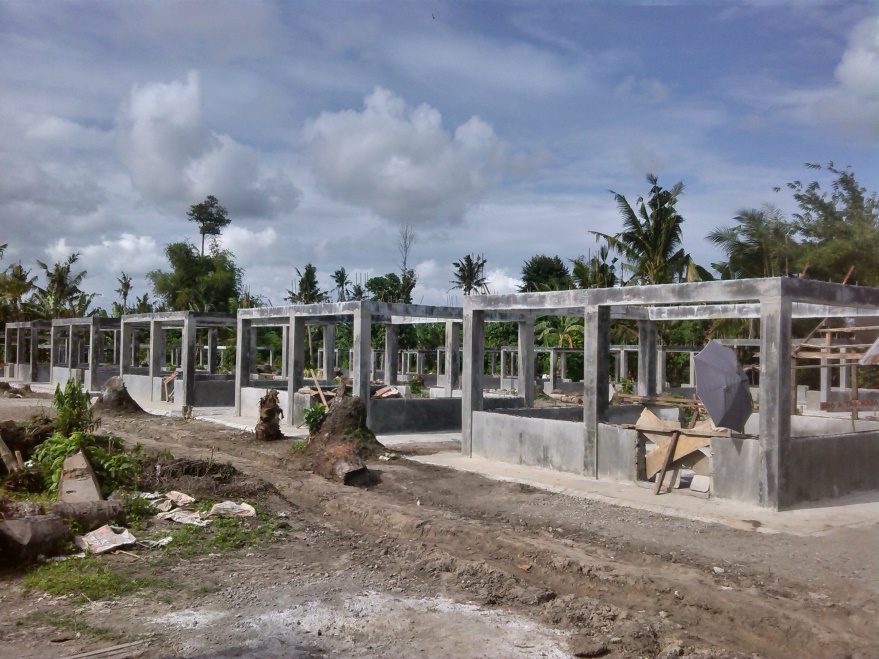 Housing projects have yet to be completed in many towns three years after the devastation caused by typhoon Haiyan. Photo from the Citizens’ Disaster Response Center Foundation

Three years ago, typhoon Haiyan (known in the Philippines as Yolanda) battered the central part of the Philippines, killing more than 6,000 people. Haiyan also caused a tsunami-like surge which left thousands homeless in the islands of Leyte and Samar.

After three years, Haiyan survivors continue to seek relief and justice. They say assistance has been slow to arrive, the rehabilitation efforts of the government have been inefficient, and some of the goods distributed in evacuation centers were spoiled.

A recent probe conducted by a government agency confirmed many of the complaints mentioned by the survivors.

The probe also revealed that the state has failed to deliver on its commitment of rebuilding the houses in the Haiyan-affected communities. According to government data, almost 2,000 houses have yet to be constructed despite the allocation of funds for the project.

The Department of Social Welfare and Development also admitted that 200,000 survivors failed to receive emergency assistance in the past three years.

Some groups have alleged that corruption and partisan politics are largely to blame for the government’s inadequate recovery efforts. In response, authorities vow to investigate the anomalies.

People Surge, an alliance of Haiyan survivors, summed up the harrowing experience of many people in the region:

Emergency was given a new meaning. Instead of lightning fast assistance to the survivors, they were made to wait, even to beg for their survival. Some were outright stricken off as beneficiaries of the cash assistance, as business interests were prioritized instead of lives in government declared “no dwelling zones”. Three years and still the emergency assistance promised to them might as well been buried in one of the mass graves.

An example of how red tape in the bureaucracy can slow down the rehabilitation process is the continued failure of the Customs Department to release the wood donated by other countries intended for Haiyan survivors.

This was exposed by the Citizens’ Disaster Response Center Foundation, which has been appealing for the release of the wood donated by a German group in order to complete its housing community project in the town of Jaro in Leyte province.

The non-issuance of tax/duties exemption and waiver of storage fees has delayed the project for six months already. Thankfully, the Office of the President has recently authorized the release of the first shipment of the donated wood.

Meanwhile, residents of Jaro continue to campaign for the release of the rest of the donated wood in order to rebuild their homes. This is the message of young people from Jaro:

Our homes in Jaro are skeletal structures. We are afraid that they will never be finished. So now we have gathered to ask for help, as one voice. Help us get our new homes and hopes for a better life!

Residents are appealing for the support of the public to pressure authorities to allow the shipment of the rest of the wood into their community. 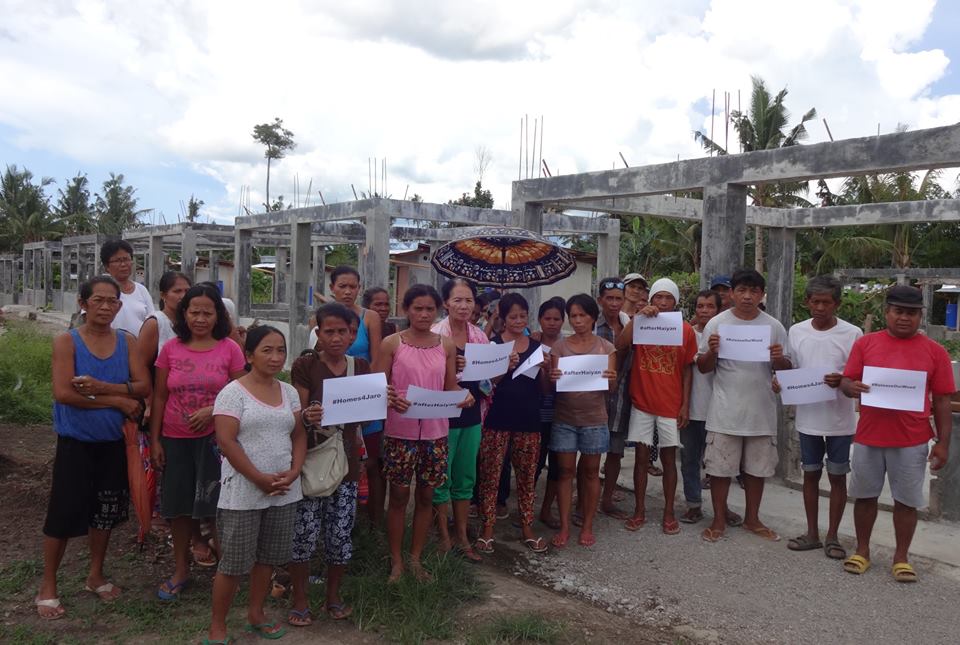 Resident of Jaro ask the government to grant the release of the donated wood that will be used to rebuild their homes. Photo from the Citizens’ Disaster Response Center Foundation 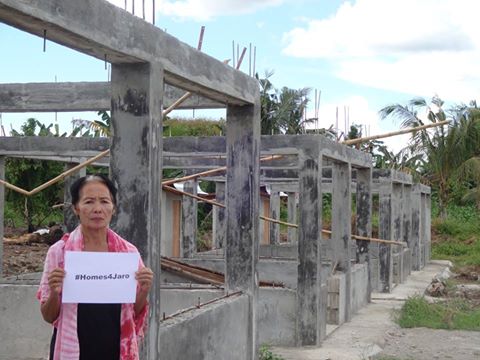 A resident of Jaro appeals for the release of the wood that will be used to rebuild their homes. Photo from the Citizens’ Disaster Response Center Foundation 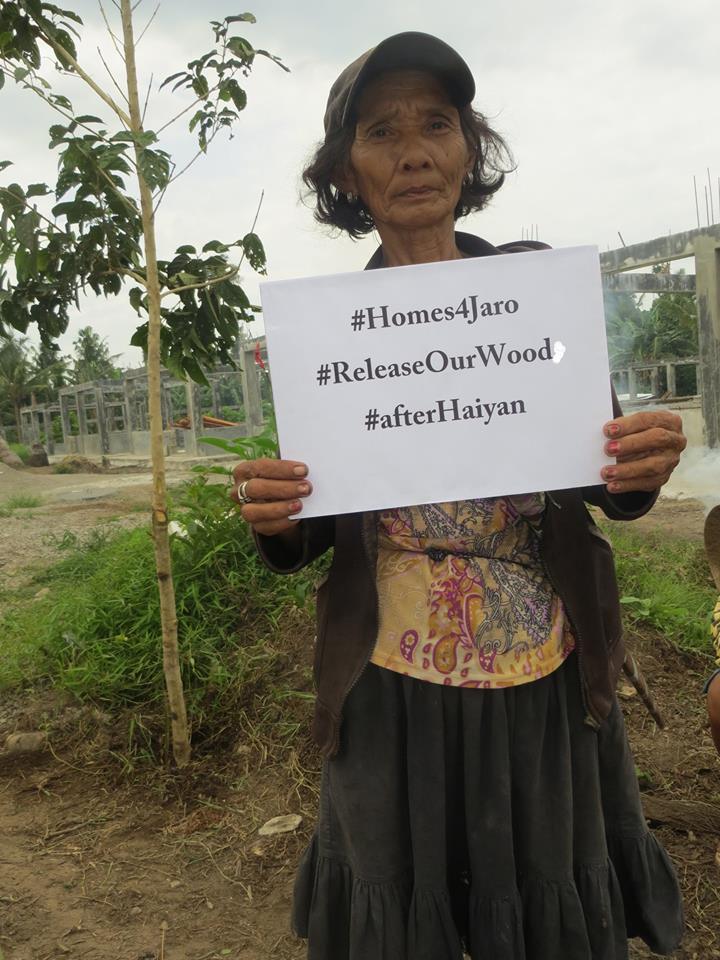 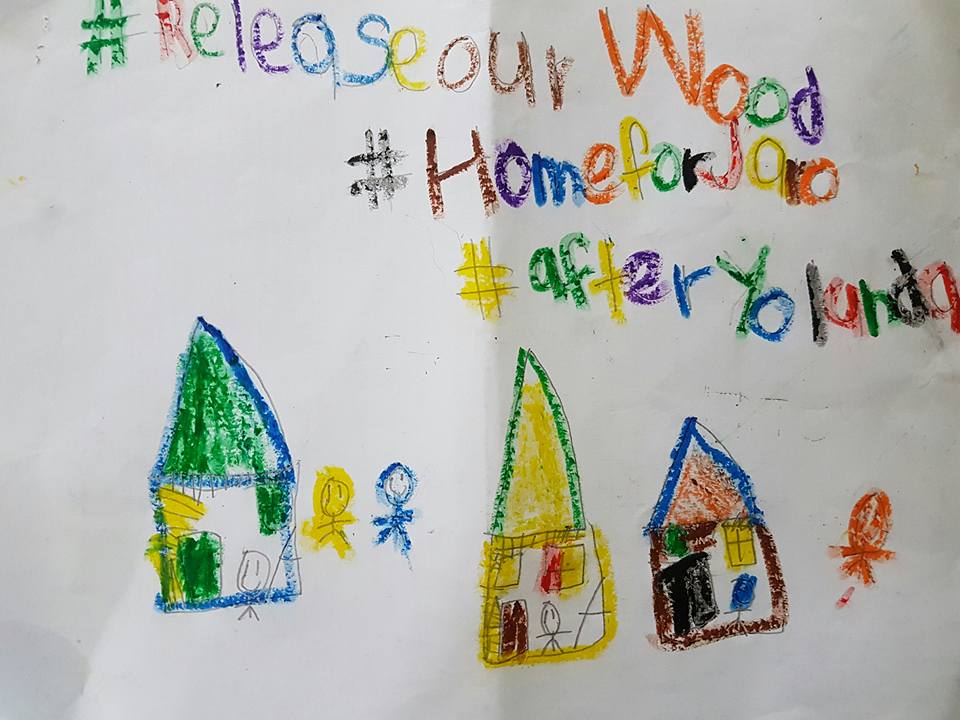 Photo of a child's artwork and appeal from the Facebook page of Mendy Mariano Malig.