For Migrants of All Kinds, the Football Pitch Can Be a Place of Real Empathy 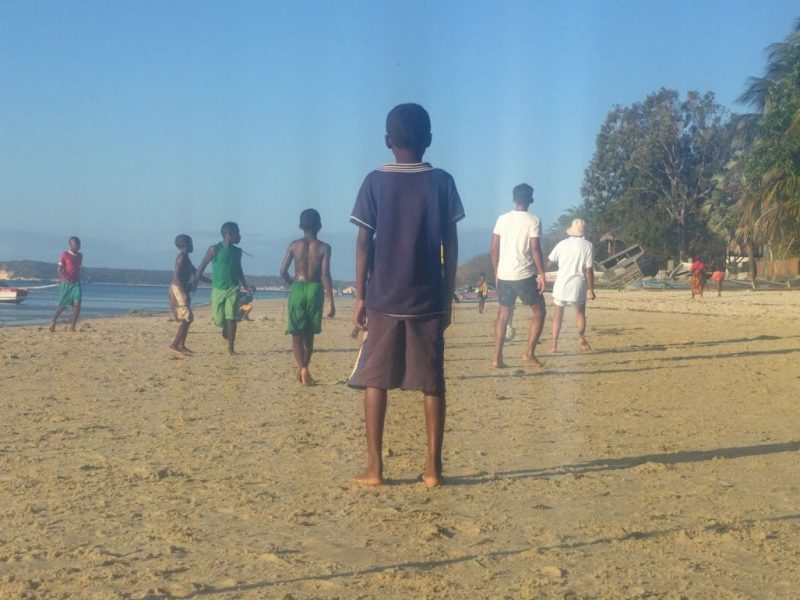 Kids playing football in Madagascar. Photo by the author.

I have a confession to make: I am horrible at playing football. My signature move is to scramble attempting a header while falling on the ground, a move that Phil Jones from Manchester United would shamelessly steal from me later on. My classmates, my cousins and my wife can attest to the fact that I have two left feet.

Still, I always jump at any opportunity to make a fool of myself on the football pitch, along with whoever is charitable enough to play with me. I usually end up being the designated goalkeeper, as that is where teams tend to put players with limited skills.

So why do I subject myself to the certain humiliation of being nutmegged by friends and strangers alike? Why do I insist on running around like a headless chicken in pursuit of the elusive ball and almost losing a lung in the process?

It dates back to my childhood. My parents worked for international health agencies, and their jobs required that we relocate every four years, on average. For my sister and me, adapting to new languages and cultures became second nature.

Many people have their own tips and hacks for habituating themselves to new surroundings and new neighbors. Mine was playing street sports. In my experience, there is no faster way to gain an understanding of your social circle than engaging in a bit of chatter during a ball game. (I favor playing basketball because of my height, but when traveling around the world you're less likely to stumble upon a basketball game than a game of football). One of the pick-up games I join from time to time these days takes place just a few yards away from my apartment. The field in the photo below is a frequent gathering place in Paris for recent migrants and refugees to come together for a game of football. 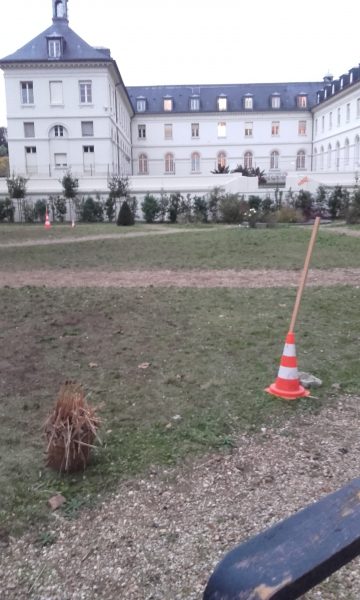 Make-shift football field for refugees in Paris. Photo by the author.

The games are usually friendly, but still quite competitive. Participants come from many different countries, so in-game chit-chat is kept to a minimum. A few weeks ago a few Malians joined us for one game. We chatted a bit after they gave us a sound beating. The stories they shared of their journey from Mali to Europe across the Mediterranean sea were harrowing. Alassane, the elder of the Malian group, is a obviously a gifted footballer, but he was limping a bit and was rapidly out of breath. He explained that he had come to France to try to provide for his four grandchildren. He didn't want his sons to have to leave their dependents to look for work abroad, so he made the long journey across the desert to Europe to seek new opportunities and send money back home. He said that a few of the passengers on the truck on which he travelled fell ill during the trip and didn't make it to Morocco, the point from which they were to cross to Spain. Alassane didn't give further details about the journey, but we could tell from the empty look that suddenly came across his face that there were some things he'd rather forget.

Sports as a vehicle of understanding and empathy is a popular idea. The refugees team at the 2016 Olympic Games in Rio is one the better known instances of the concept.

More recently the youth team of the UNRWA (UN Relief and Work Agency) for Palestinian refugees from Gaza won the world's largest youth football tournament, the Norway Cup in Oslo, in which 2,199 teams from over 70 countries gathered.

For me playing football is also about reconnecting with a part of my life that I left behind a tad too early. I grew up in Madagascar, and I left the country when I was 13 years old. I feel like I missed the opportunity to spend my formative years among the friends and relatives who were so important to me in my early years. Now, when I go back to Madagascar, it feels both like home and like a different place all at once. I guess it is really true that you can't go home again.

While I was in Madagascar a few weeks ago my cousins and I came across a fierce game of football being played between young kids on the beach at Ramena, a fishing village on the north coast. We asked if we could  join in, and the kids generously agreed. My cousins and I stood out a bit from the rest of the players: we were older and heavier, and the kids were faster and had more stamina. We were worried about making the right passes and not getting hurt, while the kids played freely and let loose of a bit of trash talk towards the “local tourists”. My cousins and I and those kids live in different worlds, but for 20 minutes we were sons of the same land—of the place that, regardless of differences in age, ethnicity and social status, is our homeland .

As migrants, although our struggles differ on many levels, there are a two challenges we all encounter: that of adapting to new surroundings, while also not forgetting the places we've come from. For me, random games of football have helped alleviate the difficulty of those circumstances in ways that no other program or public policy could have ever achieved. 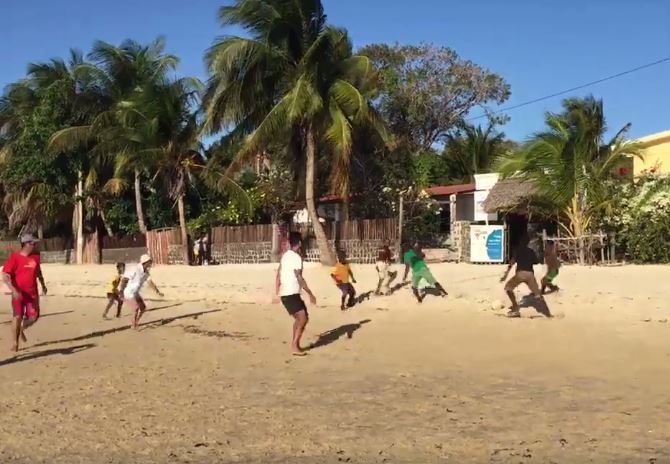 Playing football with fishermen's kids in Ramena, Madagascar (photo from author with permission)