A Hilarious Meme Leads to Crowdfunding Campaign for Children in Ghana 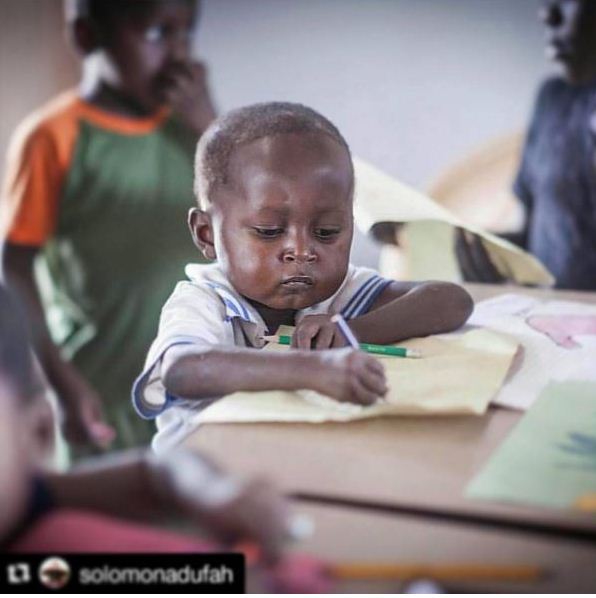 It all started with a photo. In it, a young boy named Jake Amo is drawing with intense focus during creative studies and art at his school in the village of Asempanaye in Ghana. The class was run by Solomon Adufah, a Ghanaian, who is studying fine arts at the University of Illinois in the United States. The picture was taken in August 2015 by his friend Carlos Cortes, who was documenting Adufah’s journey to Ghana. Adufah shared the photo on his Instagram page in January 2016.

The snapshot then became an Internet sensation in September and October 2016. It is believed that this was after South African Internet users remixed the photo into funny memes such as this and this. 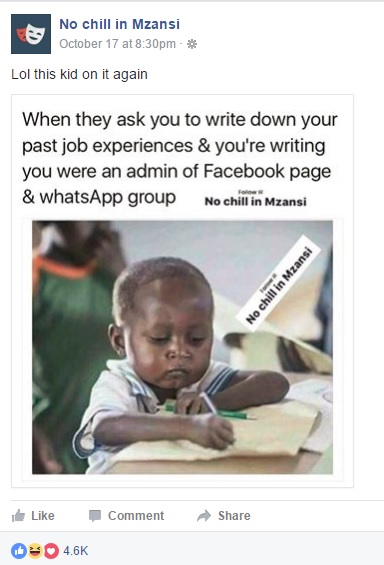 “When they ask you to write down your past job experiences & you're writing you were an admin of Facebook page & whatsApp group”. Screenshot from No chill in Mzansi” Facebook group.

Solomon Adufah has turned the now iconic image of Jake into a crowdfunding initiative to support him and other children like him in Ghana. On its 12th day, the campaign had so far raised over $12,000 from over 500 donors.

Adufah explains his intentions in the campaign's trailer:

Reacting to the story, Ayuba Fowoke, an author at Innovation Village, noted how the popularity of the meme and the resulting crowdfunding campaign are putting a spin on the popular African saying that “it takes a community to educate a child.” Fowoke wrote:

There have been many stories of how crowdsourcing rescued many from challenges. But it is more exciting when a negative and hilarious meme is turned into a good tale like that of Jake. In addition, it is even better if the meme resolves a social problem.

This is what happens when government and local authorities abandon their responsibilities. There are millions of children out of school across Africa while the ones who are in school learn in dilapidated conditions.

There is no guarantee that many around Africa and the world will stop using Jake’s pictures for memes. However, what is sure is that Jake and his friends at Asempanaye, Koforidua will learn in a more conducive environment and with superior writing materials! Thanks to the pensive, and morose looking Jake, Solomon Adufah and Carlos Cortes.

Tweeting about Jake, Olwethu Mthathi summed up his impact:

Jake Amo is a legend, an icon of the African meme & social media generation #JakeAmo