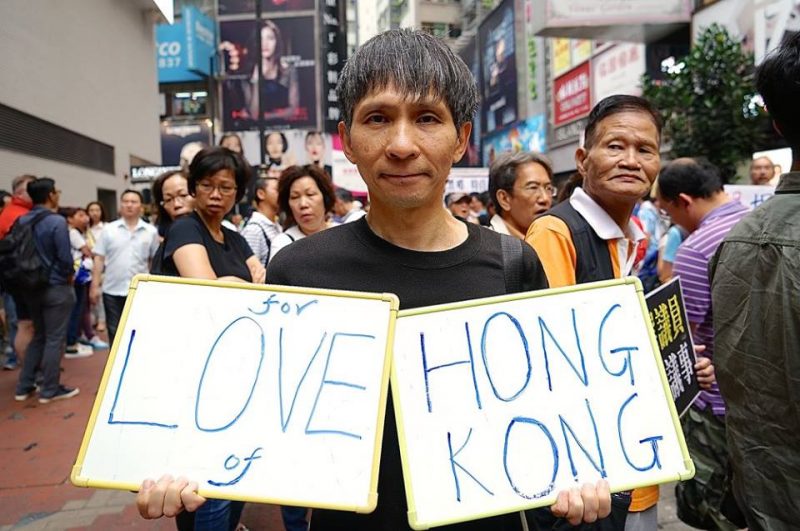 A demonstrator holds the placard “I love Hong Kong” at a Sunday rally against Beijing's interpretation of the Basic Law. Photo from inmediahk.net.

State officials in Beijing have intervened in a local political controversy in Hong Kong by offering their own interpretation of the “Basic Law,” or Hong Kong's constitution, which protects the city's autonomy.

Neither Hong Kong's court nor its government appealed to Beijing for legal clarification, making the move an unprecedented indication that the Chinese state believes it can interpret the law whenever it serves a political purpose.

In this case, the political purpose was to ensure that Hong Kong's court will remove from office two newly elected lawmakers who openly challenged China's authority while taking their oath.

On Sunday, Nov. 6, thousands rallied in Hong Kong against the intervention from Beijing. The Hong Kong Free Press livestreamed video from the demonstration:

#HKFP Demonstrators on the move – 1000s marching to central in protest of Beijing's intervention in oath saga. #Ho… pic.twitter.com/8lWd1P38ID

Update 9:30am Nov. 7: The rally turned violent between police and protesters by Sunday night:

The national legislature of the People's Republic of China, called the National People's Congress, intervened as a response to the inauguration of two lawmakers from Youngspiration, a political party in Hong Kong that identifies as “localist,” meaning it champions the city's autonomy from the mainland.

Article 104 of the Basic Law outlines how the swearing-in of elected officials in Hong Kong should happen:

But when Leung Chung-hang and Yau Wai-ching first took their oath of office on Oct. 12, they altered the oath's wording, pledging allegiance to “the Hong Kong nation” and calling China “Shina” — a derogatory term used by Japan during the Second World War. They also displayed a banner that read, “Hong Kong is not China.”

Their oaths were declared invalid by the secretary general of the Legco, Hong Kong's Legislative Council.

This wasn't the first controversy surrounding the oath of office and the Legco. In 2004, lawmaker Leung Kwok Hung and the Legislative Council's clerk went to court over a similar issue. The court ruled in favor of the latter, saying at the time:

Since this verdict, lawmakers from opposition parties have kept political statements during their oaths within certain parameters, shouting out any slogans before or after the words of the actual oath of office. Others have used other loopholes, as well, such as wearing t-shirts that display political statements.

Though the Legco secretary general invalided the oath of office of the two lawmakers from Younyspiration along with a third lawmaker, Legco President Andrew Leung offered all three individuals a “second chance.”

The Hong Kong government then stepped in, seeking an interim injunction to block the two Younyspiration deputies from taking the oath for a second time, pending a judicial review of President Leung's offer.

Critics have accused Hong Kong's executive branch of trying to offset the balance of power between the judicial, legislative, and executive branches, though legal experts and lawmakers from both the democratic and pro-establishment camps said they wanted local courts to intervene.

Given that no state authorities in Hong Kong appealed to Beijing for “legal clarification,” there is now some doubt about the legality of the National People's Congress’ effort to interpret the Basic Law.

Hong Kong is a special administrative region of China with a high degree of autonomy from the mainland, and the Basic Law outlines how this “one country, two systems” principle is put into practice. According to Article 158 of the Basic Law, any interpretation request directed to Beijing should first come from a local authority, specifically a local court:

If the courts of the Region, in adjudicating cases, need to interpret the provisions of this Law concerning affairs which are the responsibility of the Central People's Government, or concerning the relationship between the Central Authorities and the Region, and if such interpretation will affect the judgments on the cases, the courts of the Region shall, before making their final judgments which are not appealable, seek an interpretation of the relevant provisions from the Standing Committee of the National People's Congress through the Court of Final Appeal of the Region.

This is not the first time the National People's Congress has tried to interpret the Basic Law, but in all four of those past instances the government never challenged Hong Kong's local courts by preempting a ruling. Hong Kong's representative in Beijing reportedly argued that the oath issue concerns “national sovereignty,” making it a priority for the national government.

The Hong Kong BAR Association released a statement warning against the consequence of the interpretation:

The Bar takes the view that if the NPCSC [Standing Committee of the National People's Congress] insists on interpreting the Basic Law in response to the incident at this stage, it will deal a severe blow to the independence of the judiciary and the power of final adjudication of the Hong Kong court. It will also seriously undermine the confidence of the Hong Kong people and the international community in the high degree of autonomy of the HKSAR [Hong Kong Special Administrative Region] under the principle of One Country, Two Systems. The irreparable harm it will do to Hong Kong far outweighs any purpose it could possibly achieve.

Kursk Edward, who blogs about current affairs, explained the situation with some concrete examples:

[The National People's Congress] is intervening in the court's ruling by interpreting the Basic Law in order to disqualify two lawmakers. This set up an extremely bad example as the Beijing government could use the same method to disqualify other elected lawmakers who have publicly expressed their will to pursue those responsible for the June 4 Massacre [also known as the Tiananmen Square Massacre of 1989], end one-party dictatorship, and demand that leaders step down. The same argument, built upon “national security” and “disrespect for the Constitution,” could be used to disqualify the lawmakers again. This [would] mean the end of our legislative system.

In an act of satire, political cartoonist “Baidiucao” added the word “dead” to the Basic Law, transforming it into the “Basically Dead Law”:

The anxiety surrounding the prospect of the NPCSC [Standing Committee of the National People's Congress] using its nuclear powers of interpretation to “settle” the pro-independence saga reveals the fragile foundation of Hong Kong’s constitutional order: the highest decision-maker is not subject to legal controls.

Chan expressed the hope that local courts can still develop legal controls to restrict Beijing‘s power, for instance by in turn reinterpreting its interpretation, while preparing for constitutional review in 2047. The year 2047 marks the end of the 50-year period in which former British colony Hong Kong is allowed to continue its way of life, as part of the agreement when the UK handed control of Hong Kong back to China in 1997:

For autonomy in Hong Kong to be secure, we cannot just rely on political controls on the Chinese Government – not when it remains a dictatorship. Legal limits have to be developed. This is an issue that has to be explored if an opportunity for constitution rebuilding arises in the run-up to 2047 or otherwise. Before that opportunity comes, perhaps courts in Hong Kong are in a good position to develop those limits.

While the legal community in Hong Kong still hopes that Beijing will restrain its power when interacting with local courts, student activist Lester Shum argues that people in Hong Kong should give up the fantasy of “rule of law,” claiming that all the laws are written by Beijing:

Some blame Youngspiration for bringing the NPC [National People's Congress] into the city, but the gate has been opened since the Basic Law was enacted. If politicians, legal experts, and others have to keep blaming Youngspiration, hold firm to the belief that Hong Kong is protected by the “rule of law” and the Basic Law, and turn a blind eye to the overarching political power of NPC in relation to our local judicial system, I am speechless. […]

However, I want to stress that we should not live in the fantasy that the “rule of law” can protect the people of Hong Kong. Democracy and people power are things we should rely on.

If we have to walk out a path for self-determination, we cannot be trapped within the framework of the Basic Law.

The Standing Committee of the National People Congress will release its interpretation on Monday, Nov. 7, and the Civic Human Rights Front called for a protest the day before, on Sunday. Though Beijing was unlikely to listen, thousands still hit the streets to defend the city's autonomy.