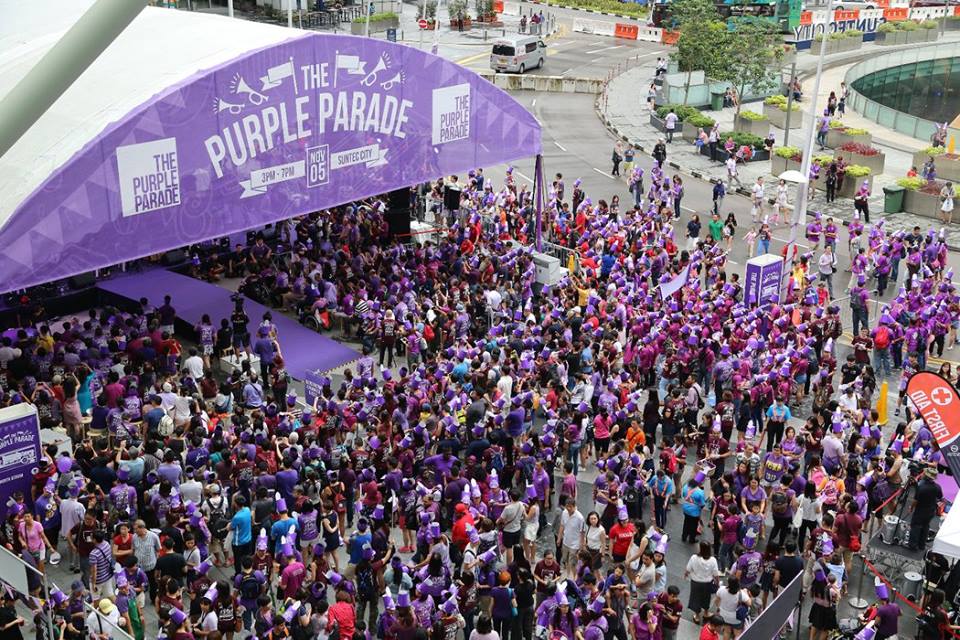 An estimated 10,000 people joined the Purple Parade in Singapore last November 5 in support of the campaign which promotes an inclusive society and celebrates the abilities of persons with special needs.

Part of the celebration also saw 19 of Singapore’s iconic buildings and historic structures being lit up in purple for 8 days.

According to the organizers, purple symbolizes solidarity for people with special needs. Meanwhile, the square logo of the Purple Parade symbolizes “equality (equal length on all sides), inclusiveness and strong building blocks.”

The festive event was attended by various groups, institutions, and thousands of family members who affirmed the call for greater awareness about the rights of persons with special needs. So far, this is the biggest Purple Parade event which was first organized in 2013.

Our next challenge is include Singaporeans with special needs in the workplace. Many more employers have to do their part. And so do all of us – as colleagues at work, as customers, and as friends. Inclusion is about us.

The Singaporean leader mentioned the education reforms that the government has implemented to integrate more children with special needs in mainstream society. He added that the thrust now of the state is to share the country’s growth with vulnerable sectors.

These are some of the photos of the event that used the hashtags #PurpleParadeSG, #GoPurpleSG, and #purpleparade2016:

#GoPurpleSG yesterday; pretty hue of purple in the Suntec vicinity since afternoon till lighting up façade at MBS vicinity in the late evening. @purpleparadesg: “The Purple Parade is a movement that supports the inclusion & celebrates the abilities of persons with special needs. We are making a movement towards a more inclusive society by opening our eyes to people with special needs in our community.”

A photo posted by Esplanade Singapore (@esplanadesingapore) on Nov 4, 2016 at 5:35am PDT

A BIG thank you to all of you who have joined us at The Purple Parade 2016! We felt so loved by all! 💜#gopurplesg #purpleparadesg #thepurpleparade2016

Completely owning the stage! | Onwheels Dance Group #GoPurpleSG #PurpleParadeSG – ‘The Purple Parade is a movement that supports the inclusion and celebrates the abilities of persons with special needs. We are making a movement towards a more inclusive society by opening our eyes to people with special needs in our community.’