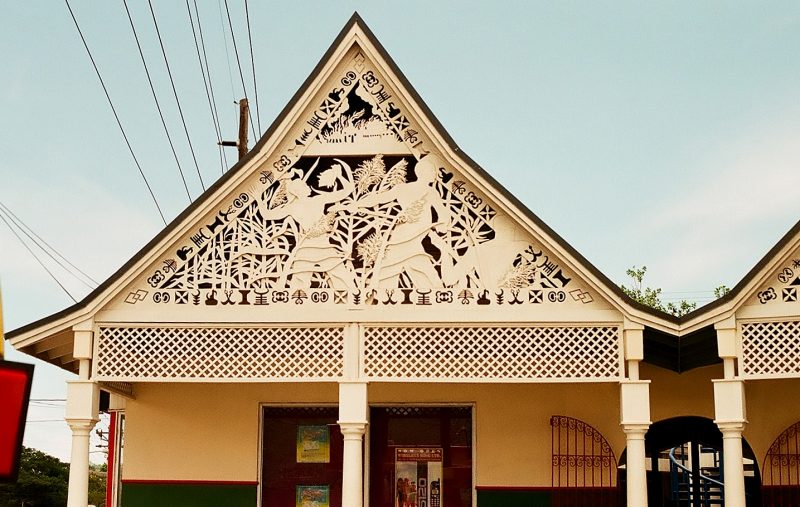 A modern fretwork depiction of the Christmas Rebellion led by National Hero Sam Sharpe at Westgate Shopping Centre in Montego Bay. Commissioned by architect Cosmo Whyte, designed by Margaret Robson and built by Will Robson and the Magic Toy Crew. By Jazzypom (Own work). CC BY 3.0, via Wikimedia Commons

Monday, October 17 was National Heroes Day in Jamaica. The subsequent week, Heritage Week, is the busiest on the Jamaican cultural calendar. This year has been no exception.

Leading up to the date, Minister of Culture, Gender, Entertainment and Sport Olivia “Babsy” Grange announced in parliament that the criminal records of four national heroes and a number of freedom fighters involved in four significant events throughout Jamaican history were to be expunged and a statutory pardon issued:

The Cabinet has approved drafting instructions in respect of legislation which will cause the expungement of the criminal records of notable freedom fighters, national heroes, supporters, sympathizers and participants by association who were involved in the 1760 Chief Tacky’s St. Mary rebellion, the 1831/32 Christmas rebellion, the 1865 Morant Bay rebellion and the 1929 campaign of the People's Political Party.

The last item refers to Jamaica’s first modern political party, founded by Marcus Mosiah Garvey — perhaps the most admired national hero among Jamaicans. Garvey was charged with contempt of court in September 1929, after criticizing Jamaica's legal system as “oppressive” and calling for laws to punish judges who were unfair. He was convicted and sentenced to three months’ imprisonment and a 100-pound-sterling fine.

This move follows the Holness administration’s recent belated attempts to bolster a failed petition to the White House to grant Garvey a posthumous presidential pardon for his 1923 conviction for mail fraud, for which he was deported from the United States to Jamaica.

The public response to the government's move was largely positive. The issue was discussed on the Running African radio show on Irie FM. Since the legislative process may take some time, one Jamaican listener urged on Facebook that the matter be prioritised.

On the prime minister's Facebook page, Jamaicans also commented, such as Jam San:

It's about time! Thank you M. Grange!

One Twitter user spoke up about the importance of other national heroes not being left out of the pardon:

Paul Bogle, a Baptist deacon living in rural St. Thomas (apparently free born) was a strong supporter of another national hero, George William Gordon. In 1865, he led a protest march to Morant Bay Court House, where hundreds of slaves were killed in a confrontation with colonial forces. Bogle was captured and hanged soon after. Gordon, a landowner in the same parish who campaigned for justice for enslaved Jamaicans, was arrested, charged and executed for his involvement in the Morant Bay rebellion. Samuel “Daddy” Sharpe, also a Baptist leader in Montego Bay, organized the Christmas Rebellion of 1831. What was intended as a non-violent protest was brutally suppressed by the military, with hundreds killed or subsequently executed. Sharpe was hanged in 1832.

Interestingly, Chief Tacky, who led one of the earliest slave rebellions, is not a national hero. His pardon is of particular interest to activist Derrick “Black X” Robinson, a resident of St. Mary, who has campaigned for years for Tacky to achieve official national hero status. In recent years, Robinson has made an annual pilgrimage — on foot — from the Tacky monument in Port Maria, to the capital, Kingston, a distance of about 26 miles. He paid an official visit to then opposition leader Andrew Holness in 2014.

Just before Heritage Week began, Minister Grange and Prime Minister Holness were busy celebrating the island’s medal-winning athletes at the Rio Olympic Games. Holness tweeted a photograph of himself sharing a joke with sprinters Asafa Powell and Usain Bolt:

These are Jamaica’s modern-day cultural heroes — not exactly freedom fighters, but helping to keep the flag flying.