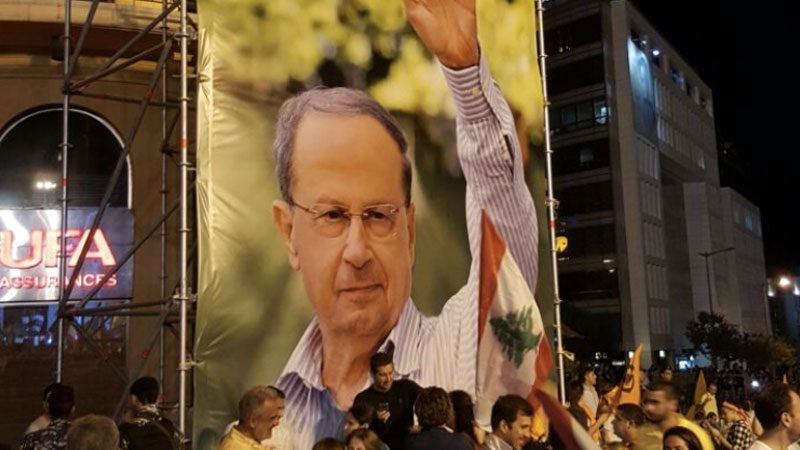 On October 31, 2016, after a 2.5-year power vacuum, the Lebanese parliament finally elected a president of the republic: Michel Aoun.

Aoun, a 81-year-old former army commander known by his supporters as “The General,” is the founder of the Free Patriotic Movement [2] (FPM) and leader of the Change and Reform Bloc. He managed [3] to get 84 votes in the first round (86 votes were required) and 83 votes in the second round (18 more than the 65 votes needed for a simple majority), making him Lebanon's 13th president. Besides giving the country an elected leader, Aoun's success is that he will return tothe Presidential Palace after he was forced out, by Syrian troops, [4] as interim prime minister in October 1990. Until 2005, he lived in exile in France.

Celebrations, mostly by FPM supporters, broke out in many parts of the country. Lebanese journalist and blogger at Beirut Syndrome Kareem Chehayeb [5] filmed one party in Beirut:

As is custom in Lebanon, many see Aoun's win in both geopolitical and sectarian terms. More specifically, critics and analysts say his election is a victory for Iran, due to the fact that Aoun was allied [10] Hezbollah's choice and that a major obstacle to his presidency was the opposition of Saudi-backed leader Saad Hariri. In fact, the Iranian government, which holds significant influence over Hezbollah, immediately praised Aoun's election, and Supreme Leader Ayatollah Ali Khamenei even called it [11] “the triumph of the Resistance Axis.” Bashar Al Assad wasted no time [12] to call Aoun and congratulate him.

In contrast, Hariri, who ended up endorsing Aoun and securing the latter's majority, called it a “big sacrifice [13].” Hariri endorsing Aoun was a surprise to the former's followers, many of whom still oppose the move. Given that he is now going to be prime minister [14], again, it seems clear that Hariri made the required political calculations to maintain some influence. As the Washington Bureau Chief for Al-Hayat Newspaper Joyce Karam wrote [13], “the Aoun-Hariri deal is a pact for power and survival by both leaders and a statement of the shifting realpolitik alliances in Lebanon.”

Karam also explains [13] how Hariri is being challenged “from within” his traditional base:

Minister of justice Ashraf Rifi has delivered a significant blow to Hariri in Tripoli and is emerging as a potential rival in garnering both local and regional support. Coming on the heels of a Saudi shift away from Lebanon toward Yemen, Syria, and in some cases Africa, the former prime minister was left with few options. Accepting Aoun was the most immediate vehicle to ease Hariri’s woes and secure even temporarily his political future.

But that is not necessarily how most people on the ground view the situation. While there are no sociological surveys to establish scientifically what people believe, anecdotal evidence suggests that Lebanese Christians generally favored Aoun, particularly after the endorsement of his former enemy Samir Geagea of the Lebanese Forces [15].

Lebanese journalist for the Wall Street Journal Maria Abi-Habib [16] said the election of Aoun should be seen as “a win for an overwhelming majority of Christians who support him” rather than the result of geopolitical calculations. The “Christian vote” often takes center stage in political analysis as the position of president of the republic is a seat reserved exclusively to a Christian Maronite, part of Lebanon's so-called Confessional System, which aims, not without its fair share of criticism, to maintain a “balance” between Lebanon's numerous sects.

Aoun's win is being framed as a win for Hezbollah / Iran. Why can't it be a win for overwhelming majority of Christians who support him? /1

As for how we got here, Lebanese blogger Ramez Dagher, who writes at Moulahazat, authored an article titled “How Michel Aoun Became the President [3]” on October 31. In about 5,000 words, he summarized the two dozen political commentaries he's written over the past three years. In those texts, he argues that alliances in Lebanon are nothing but temporary phenomena [17] depending on regional trends and internal discord.

It's important to note that no elections have been held in Lebanon since 2009, meaning that the parliament that chose Aoun to serve as president is illegitimate, technically speaking. As Dagher explains:

There is nothing democratic about the 2016 Lebanese presidential election. The president will stay till 2022, and was elected by the parliament of 2009. Everyone who wasn’t 21 at the time didn’t participate in the electoral process, and that means that anyone aged 33 or less would have had no say about who rules from Baabda Palace in 2022. And even those who indirectly elected the president by electing in 2009 the parliament that chose him, they picked their representatives in a completely different context: They voted for one of two coalitions that were completely different at the time, in a completely different regional and local context: There was no Syrian Civil War at the time, no Arab Spring, no ISIS. Hezbollah was still fighting Israel, not fighting Israel and in Syria. March 8 and March 14 had only tried to rule together once, between 2008 and 2009, not three times (2008-2009, 2009-2011, 2014-2016). There was no trash crisis, no garbage protests, no alternative political group back then. Moreover, you can’t deny quorum until the parliament elects you, and then come back to say your election was democratic. Especially if the current parliament that elected you as president is unconstitutional in the first place (and I’m quoting the constitutional council here)

Shortly before the elections, a video of Aoun [18] started circulating on social media showing him saying just that: the parliament is illegitimate and therefore cannot elect a president. He said it during a news conference on July 7, 2015, and repeated it in March 2016 [19].

This video was uploaded by the “You Stink” Movement [20], which led protests against the “trash crisis” and corruption in the summer of 2015. On Facebook, the group used the hashtag “#كلن_يعني_كلن” (“All Means All,” and “They are all corrupt”), a popular chant repeated during the protests.

What a shame… a shameless lie to the Lebanese people. Note: these are his words, not ours. Press conference on July 7, 2016 with OTV channel [Lebanese tv station belonging to the FPM]

Angry Lebanese mocked the elections online, widely describing the process as a circus. A notable source of laughter was how House Speaker Nabih Berri, during the election, was repeatedly forced to tell lawmakers to return to their seats, at one point complaining that members of parliament were behaving like “a school of hooligans.”

One Twitter user [21] shared a video produced by Lebanese news station Al Jadid, showing members of parliament joking and laughing amid the chaos. The Arabic branch of AJ+ shared [22] a similar video.

House Speaker, Nabih Berri, is like a headmaster in a school of disrespectful students! pic.twitter.com/CG0335HZD9 [23]

One lawmaker, Walid Joumblatt [25], who heads the mostly Druze Progressive Socialist Party (PSP) and is known publicly for his rather eccentric tweeting habits, was on Twitter throughout the session, uploading images of Ancient Rome:

Two of the votes cast were also the source of a number of jokes [30]. One MP voted for fictional character “Zorba the Greek,” while another voted for Lebanese singer and model Myriam Klink (who is a supporter of Michel Aoun).

In today's Presidential election in #Lebanon [7]‘s parliament, Michel Aoun won but Zorba The Greek got one vote 😂😂😂 pic.twitter.com/QZquJ2Zlxc [31]

And as Nadine Mazloum of Newsroom Nomad noted [35], the election was riddled with corruption even before it started:

Two MPs should not have been allowed into Parliament, but alas, for the sake of consensus, they were.

The first is Issam Sawaya, who reportedly left Lebanon shortly after his election in 2009, only to return for the Presidential bid. The second is the highly controversial Okab Sakr [36], who has been outside Lebanon since news of his involvement in a Syrian arms deal [37] emerged in 2012. Sakr came to vote, but no mention of his involvement in the arms deal was made.

I don’t know about you, but the last time I checked, MPs were elected to serve as the representatives of their people. If they can’t do the job, its best that they resign to make way for others who can.

With this rocky start for Aoun's presidency, only time will tell what comes next for Lebanon.