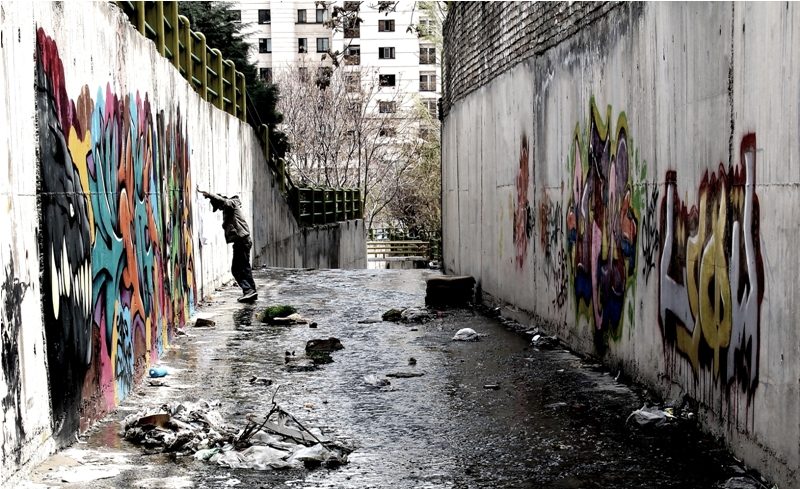 Iranian filmmaker Keywan Karimi’s first feature, Drum, was recently screened at the Venice Film Festival’s Critics’ Week. Karimi, who, due to the political content of his previous documentary, “Writing on the City” (2015), was sentenced by Iran’s judicial court to six years in prison, made Drum while waiting for that sentence to be executed.

On August 6, a few days after the lineup for Venice Critics’ Week was unveiled, Vatan Emruz, a conservative daily based in Tehran, published a long article condemning the Venice festival for selecting Drum. The piece reminded readers that Karimi had been sentenced for making a documentary that supported the post-election uprising of 2009, and expressed outrage that “instead of enduring his judicial sentence,” Karimi “[had] made yet another film!”

Karimi is not the first Iranian filmmaker to continue his career despite judicial pressure. Jafar Panahi and Mohammad Rasuolof were arrested in 2010 for “filming without permit”, yet risked more severe judicial punishment and continued to make films.

The primary intention of the Vatan Emruz article was to defame “Western” festivals for supporting films by “outlaw directors” who “demonize” Iran. The article acknowledged, nonetheless, that a new tradition is emerging in Iranian Cinema, and cited “Drum” (2016), Jafar Panahi’s Taxi (2015) and Mohammad Rasoulof’s Manuscripts Don’t Burn (2015) as examples of this new movement.

The Cinema of the Excluded

In the article, “Keywan Karimi, narrator of Tehran’s walls”, Maryam Hanifi and Azad Aziziyan argue that Iran’s post-revolution filmmakers can be divided into three categories: propagandists, moderate social critics, and radical social critics. The work of this third and most recent group, according to the authors, constitutes the “Cinema of the Excluded”, and they argue that Karimi’s oeuvre is a part of this wave.

While I agree with Hanifi and Aziziyan that a new group of radical filmmakers has emerged in Iranian cinema, I think the idea of a “Cinema of the Excluded” should be developed, both to take account of the long tradition of such a cinema in Iran, and also to differentiate earlier examples from the shift that occurred in the aftermath of the 2009 presidential election.

Many Iranian filmmakers have been social critics, and have made films that tell the stories of excluded communities: Suhrab Shahid Sales and Amir Naderi come to mind. After the revolution in 1979 some of them—Naderi, for example—left Iran. Others, like Nasir Taqwa’i, stopped making films. In the last few years, as digital technology has made filmmaking cheaper and more accessible, this type of cinema has experienced a revival. Thanks to the solidarity of filmmakers in other countries and the support of Iranian civil society, a few recently banned directors have dared to defy serious judicial and political pressures and make films.

The illegal conditions of these films’ production have proven fertile ground for the filmmakers to “decenter” themselves in terms of style and technique. A brief comparison between the work of Jafar Panahi and Keywan Karimi demonstrates how their circumstances have influenced the form and structure of their films.

Not all Panahi’s films fall into the “Cinema of Excluded” category, but three of his recent works definitely do: This is Not a Film (2011), Closed Curtain (2013) and Taxi (2015). Panahi is a master of “factasy”, a word coined by the cultural critic Hamid Dabashi to refer to the combination of fact and fantasy. For this, Panahi is very much indebted to Abbas Kiarostami. Prohibited under Iranian law from making films, however, Panahi has based his recent narratives on his own life, becoming in the process the embodiment of the “outlaw director” in contemporary Iran. By employing “factasy” as a narrative technique, he has been able to deliver bold social criticism.

Unlike Panahi, almost all of Karimi’s films could be said to fall into the “Cinema of the Excluded” category. His work is an exemplar of the style, for several reasons. To begin with, his last few films were written and directed during periods when he was either being summoned for interrogation, or on trial. His protagonists have often been members of excluded communities: night watchmen (The Adventure of Married Couples); Kurdish gas smugglers (Broken Border); graffiti artists (Writing on the City); retired army men who have lost their dreams and homes in an earthquake (Anti-Earthquake Conex).

Karimi does not reduce the challenges of Iranian society to a mere “cultural” conflict between tradition and modernity. He invites the audience to look deeper, at the internal relationship between culture and conditions of production, exploring the way, for instance, that a passion for life deteriorates in the process of making a living (The Adventure of Married Couples); or how people could lose their lives in the process (Broken Border); or the thirst to reclaim human desires prohibited by law (Anti-Earthquake Conex). They also counter formal ideological historiography by reviving political histories that have been systematically oppressed (Writing on the City).

What is the goal of the “Cinema of the Excluded”? The translator Behruz Safdari argues that Keywan Karimi’s cinema is an “authentic” art that invites its audience not only to become conscious of their surroundings but also to change them. According to the filmmaker and critic Ardawan Tarakemeh, in representing a city “the main question is whose city is being represented. Is it the city of the bourgeois or petty bourgeois class? Or the city of the poor, the outcasts? For whom one is representing it? And against whom?” Tarakemeh contends that the city as represented in Karimi’s films is the city of the outcasts—one that tends to be erased in official ideological representations.

Drum: Cinema as an Extension of Graffiti

Drum is based on a novel by Ali Morad Fada’i Nia. Written in 1960, the novel is set during the peak of Tehran’s oil boom-driven modernization, a period which, in Karimi’s view, has strong resonances with post Nuclear-Deal Iran, as both periods embrace the dream of capital—“we are better if we are richer”—resulting in a “culture of greed.” For Karimi, Fada’I Nia, though dismissed by his contemporaries, was among the few intellectuals of 60’s who radically criticized the social order that was emerging as a result of capitalism.

In Drum Karimi, who has roots in photography, invites us to luxuriate in the film’s beauty, while puzzling us with its storyline. A lawyer receives a mysterious package from a man, who is soon killed. Threatened by a gang of outlaw officials, the lawyer holds on to the package, until the gang’s threats mount to the point where they kill his beloved. Evoking an abstract, timeless and dream-like atmosphere, Karimi tells a story of oppression and individual resistance which ends with the absurdly accidental and joyless victory of the protagonist. There is little dialogue, and the pace is very slow, echoing the style filmmakers such as Aki Kaurismaki and Bela Tarr.

In light of the pressures under which Drum was made, Karimi has described his stylistic approach as “crisis aesthetics.” In an interview I did with the filmmaker I asked him what that meant. “I believe there is a recent phenomenon,” he told me.

“This has arisen as a result of recent developments, not only in Iran, but globally. It is the state of crisis that has taken root all over the world. I mean crisis in the Agambenian sense of the word, meaning a state that can result in the suspension of law.

“Law can be suspended twice in a society. The first is when the people suspend it by means of revolution. The second is when the law suspends itself to establish a police state. In such a state of crisis nothing is predictable, yet all things are anticipated. During the past six seven years, the police state has established itself in the entire world, and in Iran too. Everyone is mistrustful of one other. Something might happen any moment. The artistic works produced in this recent period should arise from this state of crisis; meaning that they have to have a kind of crisis aesthetic, not the aesthetic of the previous era.”

The aesthetic of his film, said Karimi, is an direct outgrowth of his circumstances. “The condition of my life is crisis. As a person facing a prison sentence, I was unable to make decisions about my future, and I still can’t…. My day starts around 3 or 4 in the afternoon, when I become sure that an agent has not come for me. Paranoia flourishes in such circumstances.

“This state of crisis in which I live has influenced the form of my film. The simple fact that my shooting permit was for only 17 days changed everything. Sometimes you had to shoot something in case you would not be able to continue. I couldn’t record dialogue, so I had to add all the sound at the sound mixing stage— there is no natural sound in the film. I thought if they let me start editing, then I will do something creative about the sound. And I did something creative. This is a movie composed of 84 scenes with no cuts.”

Karimi does not exoticize his situation. He universalizes his personal experience, referring to the similarity of the West and the rest in the contemporary world. “I am the rest,” he says, pointing to the unpredictability of daily life in a police state, a condition to which we are all getting accustomed, to the point that it is now affecting the way we make our films.

For Karimi, therefore, a director is like a graffiti artist, an outlaw who lacks the comforts of the conventional painter, and whose art reflects the conditions of its production. Through his work, he invites us to be aware of the state of crisis in which we live, to creatively resist the limitations that such a state imposes.

Mahdi Ganjavi is a Ph.D. student in the department of Leadership, Higher and Adult Education at University of Toronto. His essays and reviews have been published in the International Journal of Lifelong Education, Encyclopedia Iranica, The Bullet, Radio-Zamaneh and Ajam Media Collective.