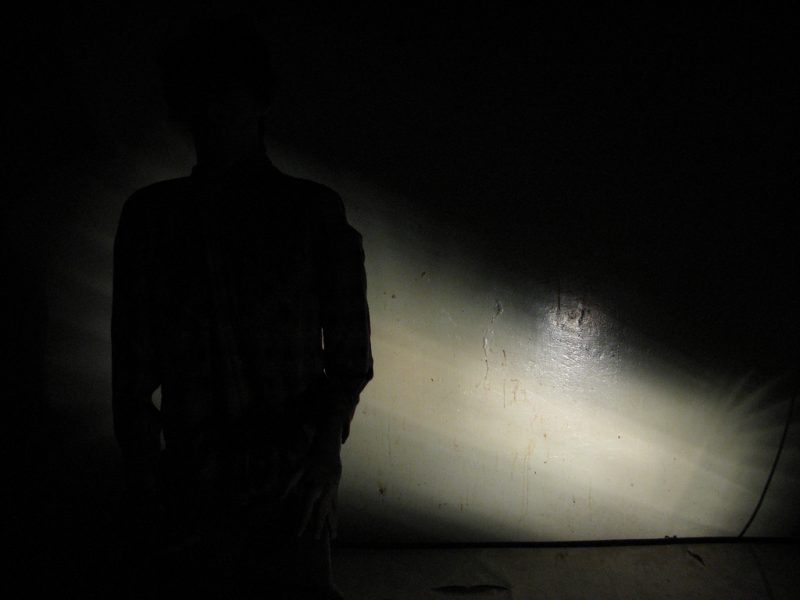 This is the first instalment in “Sleeping or Dead”, a six-part series by activist Sarmad Al Jilane about his experiences in a Syrian prison.

Away from our blue, virtual world, you look at yourself and find that you’re the only one whose pertinences have disappeared. They slowly ooze out, exposing pain as a truth that you can clearly see, both inside and out. A truth that lives up to its name. One that becomes a list of feelings and expressions, not metaphors.

But when you come back to the real world and beyond the charm of the theatre and the pretty stage and actors, and open the door that leads backstage, people turn into flesh and blood and everything screams death. Doubt vanishes and you’re assured of your existence despite the earth’s revolving on its pivot of doom, and you realize that you are here, trapped behind walls built by your parents, and before them your grandparents, brick by brick.

They arrested my father and me three times, but that wasn’t enough for me to “learn a lesson” as the Security Branch Chief said, vowing that the fourth time would be a charm. He proved his dominance over us by breaking even our simplest concepts.

Five young men, plucked from the beautiful garden of our revolution during a peaceful protest. It was enough for the entire city to shatter the darkness of night with shouts of “Allahu Akbar”. All neighborhoods arose except mine. And for the first time it was quiet, idle, when it shouldn’t have been—even though I never expected much from a city packed with regime security branches and their accomplices.

The third night. Things became quiet after the main electricity supply unit of the neighborhood was disabled. I broke the silence shouting “Allahu Akbar” several times from the rooftop of my house. I heard my voice echo through the silence. A few minutes later, friends felt safe enough to join me. I wasn’t alone. There were many friends, real friends who joined me; together we formed a beautiful image that lived up to my expectations. At that moment you realize that you’re letting the genie out, but you just don’t care.

A call from my father: “Get ready—we meet at the Military Security Branch”. The call ended.

I discovered then that no matter how much honey you swallow, nothing can bring your voice back after such full-throated shouting, before you reach a security branch. I arrived there. Colonel Ghassan was sitting with several of his men, my father and now me.

Colonel Ghassan starts talking: “Let me hear you shouting ‘Allahu Akbar’, or are you only brave enough to do it when you’re away from us?” His eyes were fixed on me, dripping hatred. “And you have the guts to look me in the eye instead of looking at the floor!”.

What I did then wasn’t out of courage. I was 18, visiting the same branch office for the fourth time. It was probably foolishness, vanity or revolution. I was so confident answering: “I didn’t expect you’d forget my voice since yesterday. And I don’t think I ever stopped looking you in the eye, so why today?”

It was the shortest conversation that could ever bring as much suffering as it did to me afterwards—despite that, I don’t regret it. “Throw him into solitary, and take his father back to solitary too”.

“Take his father back to solitary”. That stinking sentence, the stench of which lingers in my nose to this day. It became a ‘syndrome’ that tortured me mentally for months.

I cross the yard. First office is where I leave my belongings. I return to the yard and go into the second office, which precedes the corridor to the solitary cells. I memorize it fully before going in. It seems like my cell is going to be larger this time, unlike the ones I’m usually given. I have to share it with only one other inmate, and I can sit immediately without having to wait my turn as I customarily have to do.

After a few minutes which felt like a lifetime, the officer left the cell, and I used the known communication method of tapping the wall with my fist. I could tell he was a “first-timer”. After long hesitation he answered me. Neither of the solitary cells near me seem to have a distinguished, middle-aged man who looks like me and is called The Doctor. My face has no features in this total darkness, and there are no doctors here; we are all numbers. “Perhaps he sounds like me??” All answers deny his existence. Maybe they took him to the big cells. Maybe they took him to interrogation immediately. The investigator assured me they would release him if I stayed. Liars. I wish I could find a scarecrow to scare away all those crows feasting on the orchard of my head.

I hear the shouts of Allahu Akbar in the distance. It must be 10 pm, the time at which the shouts occur each day. The door opens. I was always convinced that black was the color of doom until I saw the yellow light of the corridor which brought us the horrible Raad.

“Out for interrogation”. Now I figured out the secret: to protect the security of the State from us and prevent us from unleashing the traitor and the terrorist living inside us, they speak in an Alawite dialect, their sectarian blackmail card and the narrow angle from which they view life. This is not a home, this is not a country, it’s a curse they call co-existence in order to make the criminal of their clan a hero.

I enter the interrogation room to find Abu Imad with his slim short body, at least to me. He starts his “friendly” conversation despite the facial expressions he can’t hide: “Son, you’re still young, you can make many things out of your life, things that are more important than hanging out with vagabonds going out in protests that will die out soon”. I kept my silence. I have memorized this by heart. I don’t really remember when receiving a friendly talk followed by insults and beating became a normal way of communication to me. I didn’t care much about when and how. Something inside told me to get used to receiving punishment in spite of not having done anything wrong to justify it. To get used to receiving punishment in all forms.

He has orders to remove as much of my flesh as he can. He likes to call them “confessions”. He starts with a plastic tube, probably used for sewage work. Your tormentor enjoys your screams. Give him his joy, you’re no match, and your screams cannot be contained. My screams did not please him enough, so he exchanged the tube for a cable. During my first detention I wondered if the investigator used to work in junk collection or if this was equipment that came with the job. A thick power cable made out of four cables braided together to give us this great invention, in their eyes.

It was just an hour, during which three of them took turns, while I stayed on the same shift. My body grew numb and I lost my voice so I couldn’t scream anymore. He felt the coldness and didn’t like it, so he poked me with an electrical prod. An electric current ran through my body. An electric current that would be enough to re-power my neighborhood. My semi-naked body lying on the floor was a perfect conductor. The numbness is gone and the pain is back. Two horrible hours after which he decided to call it a night. I guess it was around midnight. I decided to go back to sleep, or let’s say it was my only choice.

A few hours passed; to me they felt like minutes. The call for morning prayers. The door opens and the doom light shines in. “Outside, you bugger”. I answer in my exhausted teenager’s voice: “Sir, my father must be worried sick”. “Shut up and move, you’re getting transferred.” This was a first. On the previous occasions it was a release from prison. Where are they taking me?!