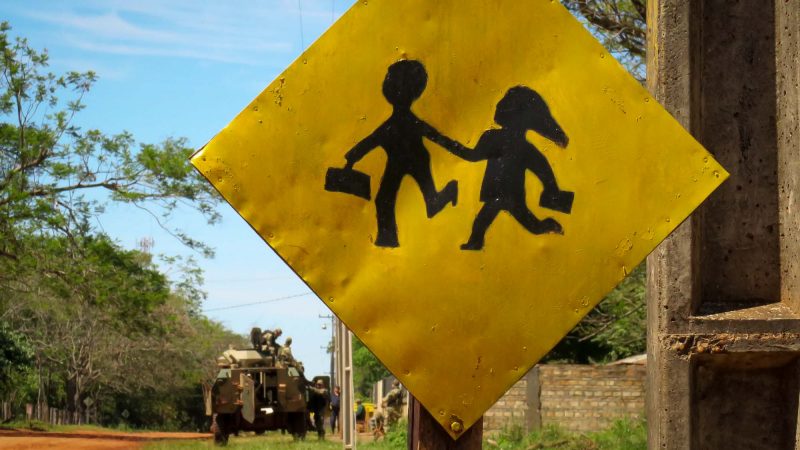 ¨Within the conflict between criminals, the military and drug traffickers, there are teachers trying to save their communities¨. Photograph published by Kurtural and used with permission.

To protect the identity and integrity of the people interviewed, many names have been changed.

In many communities in Concepción, one of the poorest departments in Paraguay, using a helmet is considered suspicious. For teachers and students who need to get to schools, especially in rural areas, motorcycles are as necessary to their education as pencils and notebooks. But in Concepción they can't use a helmet. People say only hit men use helmets.

In towns like Yby Yaú or Arroyito, about 350 kilometers north of the country´s capital Asunción, it is common to see uniformed children going to schools on motorcycles without protection. But this is only one of the many risks they face.

In August this year, a Paraguayan member of congress suggested napalm attacking the north of the country to rid it of the Paraguayan People´s Party (EPP), an armed criminal group accused of kidnappings, attacks and deaths. Two months earlier, another member of congress and the Senate Human Rights commission had suggested something similar: bomb the area even if “innocent people must die” in the process.

What legislators fail to mention is that the violence associated with the north today goes hand in hand with another characteristic of departments like Concepción: a decades-long, systematic abandonment by the state.

Beyond the armed groups, hit men, drug trafficking, army, lack of access to basic services and the advance of an economic model that excludes them, a group of teachers —some of the innocents that “could die” in the congress member's plan— work in their communities in an effort to continue offering children in the area the chance for an education.

Teaching as a means of resistance

To get her teaching degree, Perla Rodríguez had to travel — over a period of five years by motorcycle without a helmet — the almost 50 kilometers it took to get to the neighboring town of Horqueta because their was no place for her to study where she was born.

In fact, she left high school four times and finally finished recently, when she was 35 years old. Later on, she decided to go to a private university with the dream of studying social sciences. However, she thought about dropping out when her friend Lorezo Areco was assassinated by hit men in the middle of the street on August 14, 2013. Areco was part of the Concepción Regional Peasants Organization (OCRC), and is one of the 115 documented agricultural leaders to be killed or disappeared since 1989, according to a report by the Coordinator for Human Rights in Paraguay (CODEHUPY).

“Lorenzo's assassination scared me a lot because I would get to my house at night. I had to change my schedule,” Rodríguez said. Being a teacher and defending the rights of the inhabitants of northern Paraguay can be lethal. Just like driving a motorcycle without a helmet. Or even with a helmet.

Like Perla Rodríguez, Marciano Jara is a teacher in his community. He lives in Arroyito, about 40 kilometers from Yby Yaú. To get there, you must pass through a 15-kilometer stretch of red dirt that looks like it could be a part of the Dakar Rally, with hills, dunes and pits created by erosion. It is a 40-minute ride through dust that burns your eyes, makes it difficult to breath and leaves streaks on your shoes, clothes and skin.

Jara is a man who is careful with his words. It's understandable. His partner and agricultural leader, Benjamín Lezcano, was executed by hit men in his own house in 2013. Lezcano was opposed to advancing soy farming in Concepción. To this day, nobody knows who killed him, or who ordered him killed. 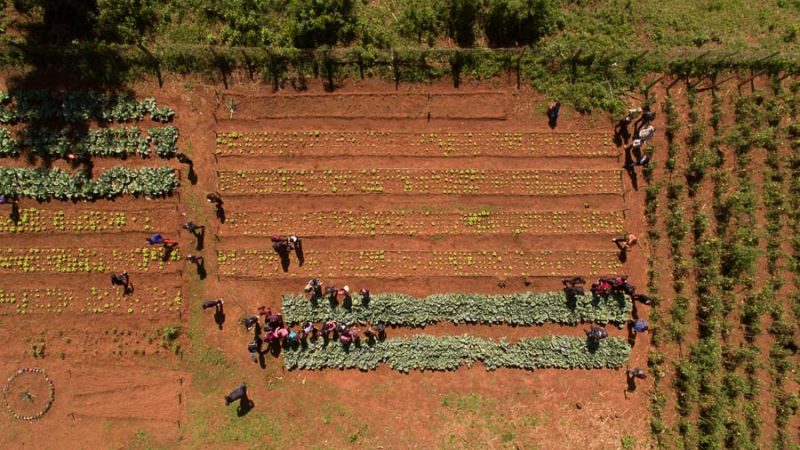 View of the Maricevich school, where students learn to plant in a community garden. Photograph by Juan Carlos Meza, used with permission.

“Education in context” is a term that is repeated often in conversation with various teachers in the area. According to them, the Ministry of Education only thinks about teaching methods that work for the city. These methods don't work in the countryside.

Schools in Arroyito are isolated. A lack of roads and public transportation further complicates getting to class, especially on rainy days or for people with back problems or prostate problems forced to make the daily journey by motorcycle. The schools are also lacking educational support and minimum infrastructure to function.

The government created the National Fund for Public Investment and Development (FONACIDE) in 2012 to build and maintain schools throughout the country, especially those located in “vulnerable areas.” However, any benefits that people hoped for have been impeded by difficulties managing the resources and corruption scandals. 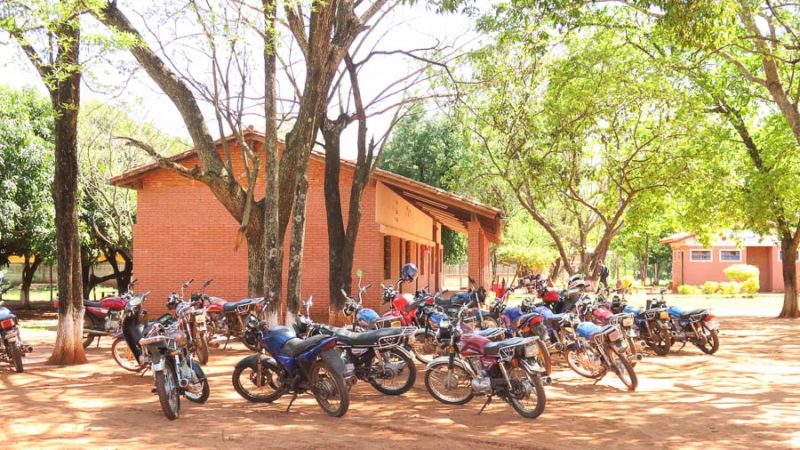 Motorcycles are as necessary to education in the north of Paraguay as pencils. Here is the parking lot in front of the 12th of April School in Arroyito. Photograph by Juan Carlos Meza, used with permission.

Harassed by the Paraguayan People´s Party, accused by the Government

Arroyito also finds itself in the middle of a crossfire between the Paraguayan People's Party (EPP) and the Fuerza de Tarea Conjunta (FTC), a unit of the Paraguayan Armed Forces. This group was the government's only response to the armed criminal group. It was established by President Horacio Cartes in 2013 with a decree that militarized and suspended individual liberties in the north of the country. It is made up of military, police and anti-drug commanders.

For people in the city, the EPP is like a distant specter, only appearing once in a while in headlines and political speeches. In the countryside, it is a very real ghost. The deaths attributed to the EPP add up to more than 60, and among that number are civilians.

In three years, there have been many complaints of human rights violations at the hands of the FTC that in many cases were covered up by the district attorney. Arroyito is surrounded by military detachments that patrol the area at night. For the people who live there, it is normal to stay at home at night or avoid getting together past 6 p.m. They are under a permanent curfew.

Many teachers have been threatened by the EPP or the FTC if they say they for or against either group.

Laura Martínez was trapped in one of these confrontations. She is a theater teacher. She was harassed by both the EPP and the state — all over a school play. “I liked doing historical plays with the children and one day I thought about doing a production about Arroyito and the history of military repression from its beginnings,” she said.

Dressing the children up like soldiers made the EPP presume that she was in favor of armed conflict. “They started sending me cell phone messages and leaving them at the radio station where I worked as a presenter, telling me that they were going to look for me, that they knew where I lived. They wanted me to join them,” she said.

Desperate, Martínez made a complaint to the district attorney, but instead of protecting her, they treated her like a suspect. “They started asking me questions, accusing me directly of being one of them [EPP].” The strangest thing for her was that the district attorney knew everything about her, her schedule, her friends. “It seemed like they were watching me. I would see military trucks pass by my house at night,” she said.

Harassed by the EPP and accused by the district attorney, Laura Martínez left her radio job and her church activities for fear that something would happen to her three children. She also stopped putting on historical plays in the school. She burned the costumes and all of the props. 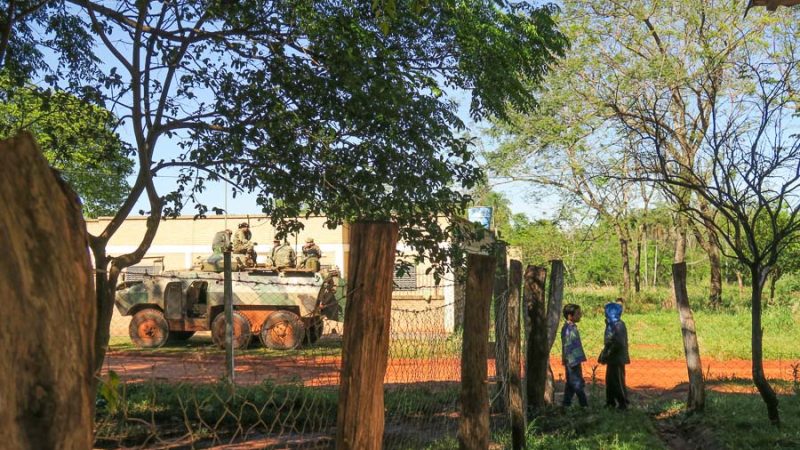 A tank with armed soldiers are posted in front of the Maricevich school in Arroyito. Photograph by Juan Carlos Meza. Published with permission.

For Miguel Rolón, an art teacher, the answer is the military. For him, Yby Yaú is the heart of the north. “It could be a wall against all of the problems in this part of the country, if they invested in the arts and the welfare of the people instead of investing in guns. The problem is cultural. The solution, cultural,” he said.

Children, who were painting in his house, come outside to say goodbye. A girl asks if she could come back the following week to keep painting. Rolón says yes. Before she leaves she shyly holds up that day's drawing with her right hand. It is a yellow and purple flower. It is inspired by another flower, a real one, that she's holding with her left.