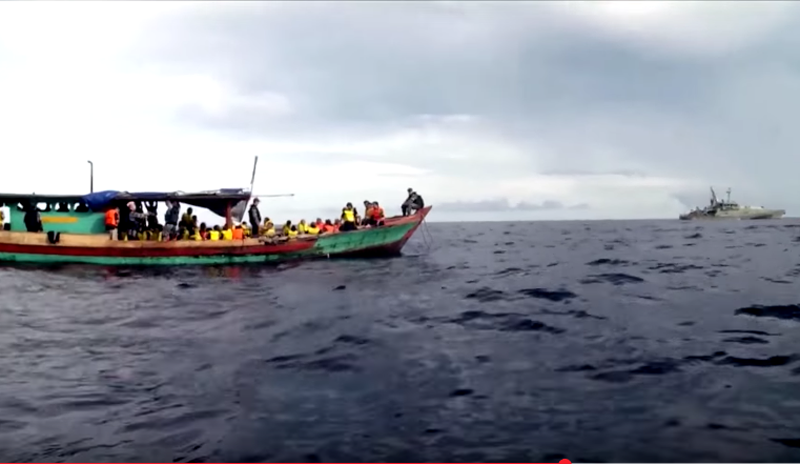 Divisions within Australia about the treatment of asylum seekers arriving by boat have been widened by the latest government proposal — Malcolm Turnbull's conservative government wants to slap a lifetime ban on them getting visas.

Currently, Australian policy deals with asylum seekers arriving by boat in two main ways: housing them in offshore detention centres on either Nauru or Papua New Guinea's Manus Island, and turning those headed to Australia back. Those who are detained and their asylum claims accepted are only supposed to stay in the centres until they are successfully resettled in a regional country. But the lack of acceptable countries for relocation means many asylum seekers languish in the detention centres for extended periods of time.

John Lord at The AIM Network (The Australian Independent Media Network) is among many who are outraged at the proposed lifetime visa ban:

It makes a mockery of international law to outlaw genuine refugees from forever entering Australia. That is the most draconian thing I have ever heard of. It applies to any adult despatched to Manus Island or Nauru since July 2013.

It confirms the fact that our government, if they cannot find third country placement will condemn those on Nauru and Manus to a life of incarceration, a death sentence despite the fact that in their entire lives they have never committed a crime. Shame on my country.

Many others online also see the issue in strong terms. Lawyer Andrew Laird is clearly one of those opposed to the plan:

Supporters of the proposed ban have been fairly quiet on Twitter. @redpill1811 is one of the exceptions:

Pauline Hanson's One Nation party has taken some of the credit and copped some of the blame. It has four members in the Senate where the government requires the votes of nine cross-benchers to pass legislation. PHON is an anti-immigration and anti-Muslim party.

Good to see that it looks like the Government is now taking its cues from One Nation. Just like last time. #auspol #PHON #Nauru #Manus https://t.co/c0GQew7vR8

@Ann1912 hoped for history to repeat itself. Hanson served a three-year term in the House of Representatives from 1996 to 1998.

.@PaulineHansonOz I smile when I remind myself that, #JustLikeLastTime you will eventually be gone! https://t.co/OetqyhQZXB

But others blame the major parties:

Let's not blame Pauline Hanson for the latest attacks on asylum seekers. The major parties have been going down this path for a long time.

However, it is doubtful that the Labor Party opposition will support the legislation necessary to enact the ban:

Malcolm Turnbull is in Pauline Hanson's pocket and HEAR HEAR @billshortenmp for calling it out. #auspolhttps://t.co/PzxcSbKgpQ via @smh

Former Labor heavyweights Kristina Keneally and Craig Emerson are clearly against the ban:

So now we're banning refugees who found refuge in other countries from even visiting Australia? That's ridiculous. Shameful. Appalling.

Some people believe that an international deal is in the offing to resettle refugees held on Nauru and Manus Island in a third country, possibly New Zealand or the USA:

Is the #AsylumSeekers legislation change the result of an impending deal with NZ? Can't think of any other reason for it. #auspol

For Jane Gilmore (@JaneTribune) the plan is merely a government ploy to divert attention from its own failings:

Me @junkeedotcom “latest attempt to distract us frm their failure 2 govern is sphincter-looseningly cynical” #Nauru https://t.co/oPvwpeEk8a

The proposal has been getting news coverage and social media attention overseas:

Doubtless, it will receive more when the legislation reaches parliament in the near future.