A Man's Haunting Tale of Escape After the Vietnam War 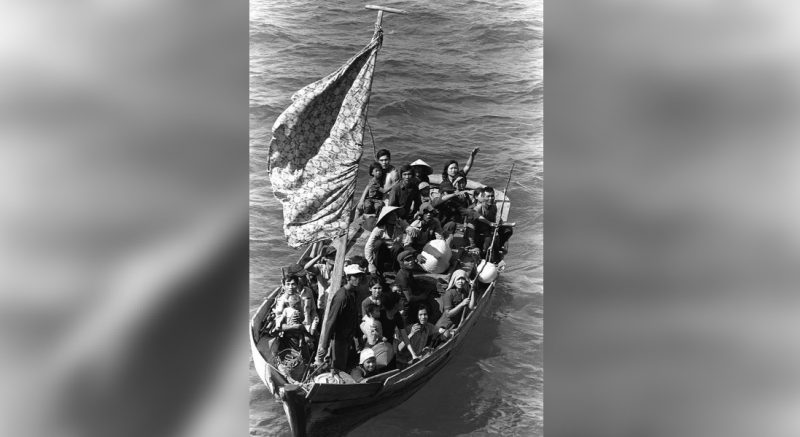 Vietnamese refugees wait to be taken aboard an amphibious command ship. Photo by PH2 Phil Eggman, via Wikimedia Commons

This edited article by Chris Lê is from Loa, an independent news website and podcast that broadcasts stories about Vietnam, and is republished by Global Voices as part of a content-sharing agreement.

Many believe that countries torn by conflict are inhabited by the spirits of those whose lives were lost. In the case of Vietnam, the war spread beyond land and into the sea, as hundreds of thousands of people fled the country by boat after the war.

For our story today, we hear an eerie tale of loss during an attempt to vượt biên – escape the country by boat. This is a story told to me by a man named Dũng Hoàng, about his experience as a 15-year-old. It happened during a journey from Huế to escape Vietnam after the war.

Dũng Hoàng is only 15 years old when he and his older sister Lý decide to take off for the riskiest journey of their lives.

The year is 1983. Dũng and his sister attempt to escape Vietnam by boat. Late one evening, deep in the middle of the night, they trek towards Thuận An beach, sneaking past security checkpoint after security checkpoint. Finally, a small, rickety boat emerges in the black water – and they embark.

Early in their journey, the boat encounters dangerous conditions. Heavy rains and harsh winds punish it violently. It gets worse the farther they get. Storms shake the boat day after day, making everyone aboard sick to their stomachs.

People begin to die, just days into the trip.

And then, the same illness hits Lý. She is violently sick: vomiting, complaining of aches that shake her to her core, with hot flashes of fever.

Without proper medication and adequate food, it soon becomes apparent to Dũng that his sister will not survive the voyage.

And so he prepares her for death. Dũng dresses Lý in clean clothes: red pajamas with pink stripes. She hands him her necklace and jade pendant, and asks him to keep it safe. It was one of the few things she has brought from home, and her most prized possession. Dũng stores it in an empty pill box. He sits with his sister until she quietly takes her last breath.

Anyone who died on the boat was given a sea burial. They didn’t really have any other options. Of the 28 people on board, eight passed away. The survivors would cast the bodies of the deceased into the water.

When it was Lý’s turn, Dũng and his boat mates placed his sister into the ocean. He watched in despair as his sister’s body floated away.

The next day, they spot a large boat in the distance. They set sail towards the boat, and it turns out to be a fishing boat from Quãng Ngãi. It takes them three hours to reach the boat. When they climb aboard, they think they have finally found freedom.

Dũng decides to give his sister’s necklace to the boat’s captain as a gesture of gratitude. It wasn’t much, but he wanted to repay the captain for rescuing them.

But when the boat brings the group back to Vietnamese shores, they are caught by security forces on the lookout for escapers. Dũng and his fellow boat mates are locked up in a camp in Quãng Ngãi for nine days before being transferred to Huế, close to his family’s home. Because he is under 18, Dũng is released early.

Shattered by the loss of his sister and the arduous, failed trip, Dũng makes his way home to break the news to his family. Just as he arrives home, his cousin opens the door. She sees him, screaming and overjoyed at his return. Before Dũng can even get a word in, she tells him that she had a dream about Lý the night before.

Lý came to her in red, she says, wearing a striped outfit.

In this dream, Lý had asked her to tell dì Hương, Dũng and Lý’s mother, to bring her the necklace. Lý then rushed away, but before doing so, she tells Dũng’s cousin to send the family her regards.

As Dũng’s cousin is telling him about her vivid dream, she suddenly stops. “Where is Lý?” she slowly asks. She now sees that it’s only Dũng at the door — and without Lý.

Dũng never had a chance to tell a single soul about Lý’s death: not about the details of the clothes he had put on her, not about the striped pajamas.

Not about the necklace he had given away.

Throughout the day, the family pieces together what happened, and decide to honor Ly’s request. The next morning, Dũng goes out to the central market to buy a symbolic necklace as a replacement. He brings it home and presents it as an offering on his sister’s altar, so that her spirit can pass on peacefully.

Dũng Hoàng is now 49 years old and lives in San Jose, California with his wife and four children. After more than 30 years, the necklace still sits on Lý’s altar at the family home in Huế.

“This story was something beyond my imagination, so I believe it to be true.” Dũng says, “To this day, in my heart, I feel like my sister is still by my side.”

Listen more to this eerie tale of loss through this podcast: