‘Stand with Standing Rock': Demonstrators in the US Rail Against the Dakota Access Pipeline

This image was taken by Josué Rivas who is photographing at Standing Rock.

For months the indigenous Lakota Sioux have been gathering to block an incursion on their lands by the Dakota Access Pipeline. They call themselves the “Water Protectors”, since construction of the pipeline endangers the drinking water at the Standing Rock Sioux Reservation in North Dakota.

The Lakota have been joined by more than 200 other First Nations tribes, along with activists from around the world. In September 2016, after the destruction of sites sacred to the Sioux, the Obama administration issued a temporary halt on construction of the pipeline.

On October 27, however, riot police advanced on demonstrators protesting against the Dakota Access Pipeline. The justification for the advance was that the demonstrators, led by the Lakota Sioux, were camped on private land.

The pipeline was originally planned to pass near Bismark, North Dakota but was rerouted to pass through the lands of Native people. This short clip from a documentary on the women at Standing Rock provides a summary of the issues at stake. “We're still fighting this fight from the 1700s,” says one interviewee.

‘Before social media, we didn't have this kind of pull…’

This post takes a quick look at some of the messages shared by the people at Standing Rock or connected to it in some way.

Social media has given rise to voices that would have otherwise been silenced. Many standing up for water rights and the protection of Native lands are poor. In a short film posted on the BBC Juliana Brown Eyes stated:

We live in a rural area. We live in an impoverished area. Before social media, we didn't have this kind of pull — you know — in the world.

Below is an image she shared on Instagram. She was in Standing Rock to protest the Dakota Access Pipeline. Her hands are painted blue as a symbol of the water.

Oglala Lakota Tribal members Scotti Clifford & Juliana Brown Eyes-Clifford from the band Scatter Their Own have been arrested for protesting against the Dakota Access Pipeline. They have been standing in solidarity with their relatives in Standing Rock SD to protect the sacred water! You can contribute to the Legal Defense Fund for Sacred Stone Spirit Camp. https://fundrazr.com/d19fAf

‘It's scary it's heart breaking and unnecessary’

On Instagram, user schwifty.squanch shared an image comparing the battle of Wounded Knee in 1890 and Standing Rock in 2016. In 1890, at least 150 Lakota Sioux were massacred by the US Cavalry.

The pipeline was supposed to be built north of #Bismarck #NorthDakota but was called off due to the ‘potential danger’ it held for the community. So what'd they decide? ‘Let's put it north of the #Natives. But this is the crazy part it threatens a city but not a small community? Because why? We're expendable?

#nodapl this is not a native Issue it's a human issue this is going on literally less than an hour from where I am it's scary it's heart breaking and unnecessary. What's going on is there is a pipeline attempting to be built that is right north not even a mile north of the #StandingRockSiouxTribe and less than a half mile west of the #MissouriRiver and a mile north or the #CannonballRiver there is the community of #Cannonball directly south of this pipeline. When the pipeline bursts it'll take less than 2 minutes for the people water to be contaminated it'll take an hour and the capital of #SouthDakota and so on and so fourth. The pipeline was supposed to be built north of #Bismarck #NorthDakota but was called off due to the ‘potential danger’ it held for the community. So what'd they decide? ‘Let's put it north of the #Natives. But this is the crazy part it threatens a city but not a small community? Because why? We're expendable? The pipeline shouldn't even be built because if it is moved south of this reservation it's directly above another if it's moved south of there it's directly above a major city if it's moved south of there it's over another rez and so on and so fourth. This is not just #NativeLands we are protecting it's ALL of ours. Anyone who lives in the #greatplains region this is your battle too. #nodapl #WakeUp

On Facebook, writer Anthony Roberts summed the struggle up in simple terms: “The Power of Love vs. The Love of Power”.

Can there be resolution?

Cheyenne and Sioux tribal leaders have spoken out about their treatment at the hands of Morton County Sherrif's Office (the police force in the region). 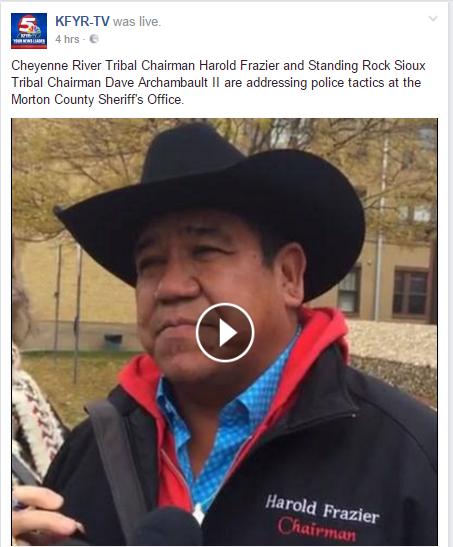 After the camp was broken up by riot police, musician Kelli Love shared a poem she wrote on Facebook:

I speak to your warrior heart,
Sometimes it is not easy to find compassion and love in the face of violence.
To pray for the men in uniform waging war on my brothers and my sisters…
so I will pray for the great awakening
To fall on every man in all the lands.

This is a big story, with many threads. The struggle for the protection of the water and the Native lands goes back generations. There is a history of environmental degradation and property theft that goes beyond Standing Rock in 2016. This is a story that involves wars, massacres, and treaties, both broken and honored.

It pits the right to culture against forced cultural indoctrination. It involves the integrity of the families of indigenous peoples. All of these issues and many more beside are being played out right now at Standing Rock.

Below are just a few resources for those wanting further information on the struggle: