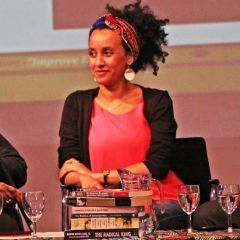 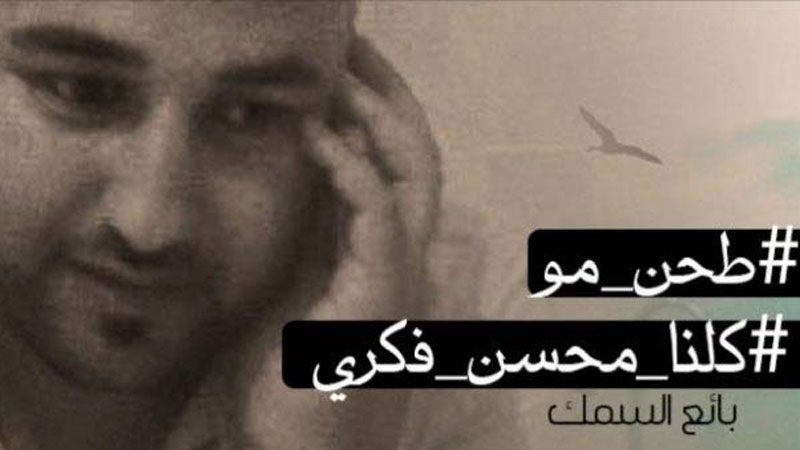 Widely used image of Mouhcine Fikri with the two most popular hashtags used on social media “#طحن ـمو” (‘crush his mother’) and “#كلناـمحسن ـفكري” (‘we are all Mohsin Fikri’). Source: SaphirNews.

Mohsin Fikri is dead. On Saturday, October 29, the 31-year-old fish vendor from El Hoceima, North Morocco (Rif), was crushed to death in a garbage truck while trying to retrieve a swordfish — his only source of income. Police had confiscated the fish earlier, in accordance with a ban on swordfish sales this season. Activists say police gave the order to activate the trash compactor while Fikri was still inside.

When the news of Fikri's brutal death, protests erupted across Morocco, spreading from El Hoceima to Marrakesh and Rabat, the capital. Using the hashtag “#طحن_مو,” which means roughly “crush his mother,” Moroccans have expressed their outrage and uploaded videos and photos of ongoing protests. The meaning of the hashtag is that the phrase is reportedly what one of the police officers said shortly before the compactor killed Fikri.

Many Internet user have uploaded live videos of the protests on their Facebook accounts. The following video was taken by Moroccan photographer, filmmaker, and activist Nadir Bouhmouch on the night of Sunday, October 30, in Marrakesh.

And Samir Kinani shared a photo of the funeral taken from afar:

Unsurprisingly, many have compared Fikri to Bouazizi, the Tunisian street vendor who set himself on fire on December 17, 2010, in response to the confiscation of his wares, becoming the catalyst for the Tunisian Revolution and the wider Arab Spring.

Mouhcine Fikri is now the Mohamed Bouazizi of Morocco. Like Tunisia in 2011, the people are expressing their outrage.

Morocco now has its own Bouazizi and his name is Mohcine Fikri. Tomorrow protest at 7pm in front of the Moroccan embassy in Paris.

This is the latest in a series of protests that have rocked Morocco in the past few years. Earlier this year, thousands of student trainees took to the streets to protest against government cuts, which they say have made it harder for them to find jobs in education.

Protests against police brutality in general and the practice of “hogra” (humiliation) in particular have become all too common in Morocco. Since 2011, more than a dozen Moroccans set themselves on fire out of desperation. In April 2016, a woman street vendor set herself on fire when police confiscated her bread and cake. That same month, a street vendor also immolated himself after his motorcycle was confiscated.

In 2013, three cases of self self-immolation were reported by women who say the justice system failed them. Amina Fillali, who was forced to marry her rapist back in 2011, killed herself in March 2012. In August 2016, a girl committed suicide after her eight rapists were released by police and threatened to post pictures of her being raped online.

King Mohammed VI inherited Morocco in 1999 after the death of Hassan II. The latter led several crackdowns in the Rif, a mainly mountainous region of northern Morocco. During the 1958–59 uprising in the Rif, Hassan II deployed 80 percent of Morocco's troops to put down demonstrations. In 1984, during nationwide bread protests, Hassan II gave a famous speech where he called the Riffians “thugs.”

Between 2011 and 2015, Morocco underwent a high-speed privatization process. In 2014, in Rabat’s Guich Oudaya, state authorities destroyed the homes of citizens, in order to sell the land to a real estate company. Residents were driven from their homes and forced to live in huts.

In 2015, thousands of Moroccans protested high electricity bills by the French company Amendis.

Back in 2008, protests erupted in the fishing town Sidi Ifni after police cracked down on unemployed fishermen killing ten protesters.

In 2014, Morocco signed a fishing deal with the European Union. For a shockingly low €30 million per year, up to 120 ships from 11 EU countries (Spain, Portugal, Italy, France, Germany, Lithuania, Latvia, Netherlands, Ireland, Poland, and United Kingdom) bought the rights to fish near the Moroccan coast.

The big fishing companies leave very little for the local fishers. In some cases, local fishers aren't even allowed to cast their nets, leaving people like Mohsin Fikri jobless and desperate.