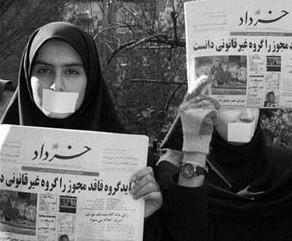 Activist protest the ban of newspapers in Iran. Photo from payvand.com.

When President Hassan Rouhani was elected to office in 2013, he was lauded for his mandate of “hope and prudence” and promises to bring more freedoms to the media and telecommunications realm.

Yet today, his administration is making significant changes to the country's press laws that may restrict freedom of expression even more so than the status quo.

Read Iran's current Press Law, ratified in 1986, on the Iran Human Rights Documentation Center website. Article 3, 6 and 7 are the sections that will be transformed under this new legislation.

His administration reportedly plans to do this through two bills: one designed to ultimately replace the current Press Law and the other to create a state media commission. While the new Press Law may appear relatively similar to the current one, it leaves more room for interpretation when determining if someone has committed an offence. This could make it easier for prosecutors or judges with political motivations to silence journalists or newspapers through arbitrary charges.

The proposed Media Affairs Commission bill to “oversee the journalism profession” would make journalists and media agencies more directly accountable to the government. The Commission will be responsible for issuing permits to journalists, draft a Journalism Ethics Code and ensure “high moral standards” in the media. At present, local Iranian journalists do not need permits to work for publications, in contrast to foreign journalists who go through a rigorous accreditation process through the Ministry of Culture and Islamic Guidance's foreign press department. Only special accreditation is applied for journalists through their new agencies to attend official settings such as Parliament, or speeches by the President and Ministers.

The majority of the commission would be staffed by state officials or people who have the state's interests at heart, not media workers.

Hardline politician Hossein Entezami, well known for repressing media freedoms, reportedly will take a leading role in the Commission. His appointment to this post, by the Rouhani Administration, is leading to feelings of disquiet for freedom of the press in Iran.

Media are already restricted in Iran — year after year the country comes in near the bottom in world press freedom rankings — and the country's current Press Law bans a litany of things, including:

The proposed Comprehensive Mass Media Regulatory Plan would take things a step further. According to the International Campaign for Human Rights in Iran, Article 20 criminalizes some new types of content and brings greater specificity to some of its previous items:

When talking about these two bills on August 6, 2016, former Minister of Culture and Islamic Guidance Ali Jannati gave the impression that they were necessary and for the good of Iran's media:

The Comprehensive Mass Media Regulatory Plan will be introduced as a bill to reform the Press Law and is designed to prevent many of the problems facing media publishers that sometimes result in the closure of newspapers or the arrest of journalists. There is also a need to introduce changes to incorporate digital media…One of the things people in the journalism profession have always asked for is a Media Affairs Commission, similar to what doctors have, that would streamline relations between journalists and the government…

Jannati's mention of journalist arrests is important. While arrests of journalists are nothing new in Iran, they often face charges under relatively broad sections of the law such as spreading propaganda against the ruling system, conspiring against officials and insulting authorities. Some recent cases of journalists newly sentenced to jail terms because of these broad offences typically reserved for political prisoners, include Afarin Chitzaz, Ehsan Mazandarani and Saman Sadarzaee, all of whom were writing for publications sympathetic to the Rouhani administration. These arrests are often interpreted as ways the judiciary and intelligence undermine the Rouhani administration. The newly proposed changes signal a complicity in this from his administration.

The newly proposed law does offer greater specificity, thereby theoretically indicating where the “red line” falls. Yet Iranian legal experts caution that this can still be subject to interpretation within the bill such as ‘undermining the foundation of Islam’ and ‘sowing discord among various classes of society’.

The Media Affairs Commission was originally proposed in September 2014, but it was set aside after much criticism from the journalism community. A closer look at some of its conditions will clarify why it has caused such alarm within Iran's media (translation by the International Campaign for Human Rights in Iran). 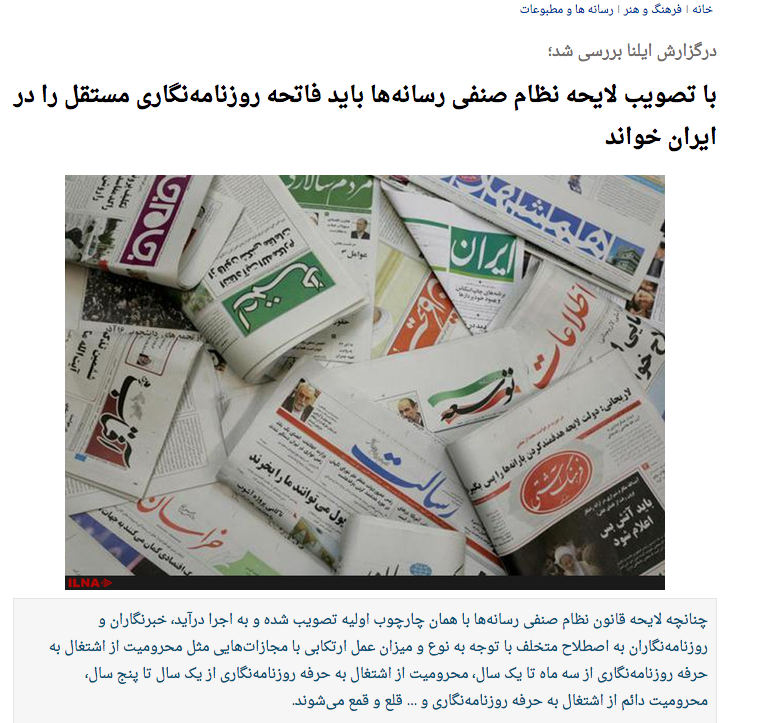 “The Passage of the Media Affairs Commission Bill Will Mean the End of Independent Journalism”, read this ILNA headline.

Above: “If ratified, the Media Affairs Commission bill would kill independent journalism in Iran,” said the headline of a report published by the reformist leaning Iranian Labour News Agency (ILNA) on August 16.

Reformist journalists who have been subject to extensive repression have noted that this bill comes by way of elements within Iran's intelligence establishments — namely the Intelligence Ministry, the Revolutionary Guard’s Intelligence Organization, the police forces, and national security organizations.

The Rouhani administration's appointment of Hossein Entezami as deputy of media affairs within the Ministry of Islamic Culture and Guidance, the body responsible for press regulation, has further exacerbated the worries of media workers.

Amongst the many appointments that Entezami has attained throughout his career, a few define his hardline position. He started his press career in 1989 as the Tehran bureau chief for Qods, an ultra-conservative daily newspaper. He was also the founder of Jam-e Jam newspaper in 2000, the official mouthpiece for the national broadcaster, the Islamic Republic of Iran Broadcasting, taking a vocal and hostile stance toward the reformist administration of Mohammad Khatami between 1994 and 2004.

Throughout the presidency of Mahmoud Ahmadinejad, Entezami was involved in the founding and administration of a number of other hardline media outlets.

Apart from his direct role within the media, the International Campaign for Human Rights in Iran mentions that Entezami has connections to Iran’s intelligence apparatus.

Ali Asghar Ramazanpour, a former official in the Khatami administration and reformist journalist now living in exile, cautioned in an interview with Radio Farda on August 17, 2016 about Entezami's motivations:

Entezami is a former Intelligence Ministry analyst who has been intent on controlling the press from the very beginning…With [these bills], he’s mostly trying to satisfy the wishes of the intelligence agencies and the Judiciary to gain more control of the media. This will be a shameful stain on Mr. Rouhani’s government if it goes forward with this bill.

Such developments and appointments are sobering warnings of the values held by the Rouhani administration, which previously had established themselves as darlings of reformists (the popular former reformist President Mohammad Khatami famously endorsed Rouhani), or those expecting improvements in rights and freedoms under his relatively progressive 2013 election campaign. These proposed changes to Iran's media regulation indicate that the moderate administration still favors the repressive tendencies of the Islamic Republic.