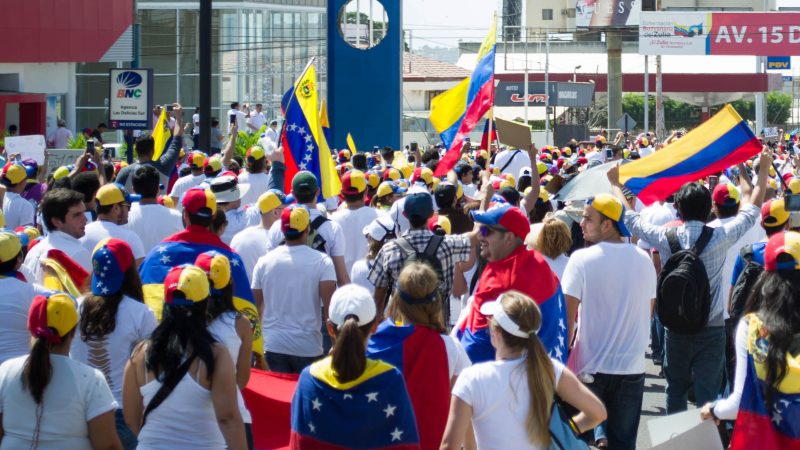 Street movements in Venezuela appear to mark the beginning of impassioned demonstrations against the government's refusal to hold a recall referendum against president Nicolás Maduro. Image: Detail from a photograph taken by María Alejandra Mora during the marches in Maracaibo in 2014. Published under Creative Commons license.

Following the Venezuelan government's refusal to hold the recall referendum as requested by the opposition, Venezuelans took to the streets in their thousands in the face of what they see as a dead end in negotiations over the country's political and economic crisis.

Images of these protests and the arguments both for and against the referendum can be followed via the #LaTomaDeVenezuela [The Taking of Venezuela] hashtag. The conversation also has local elements with marches that have taken place in parts of the country other than the capital Caracas, such as in the plains region of Barinas, the Andean regions of Mérida and Táchira, the central northern state of Carabobo, and Margarita island in the region of Nueva Esparta.

Economic and political instability — heavily linked to the collapse of the oil price — has been steadily growing in Venezuela, resulting in acute shortages of food and medicine for ordinary Venezuelans. For many opposition supporters, the exit of President Nicolás Maduro and his administration could help usher in much-needed changes, while Congress, where the opposition now holds a majority, has been pushing in vain to bring impeachment proceedings against Maduro to the Supreme Court he retains control over.

While the national electoral body agreed to holding a referendum, the Maduro administration has backed away from endorsing what would effectively amount to a vote on its mandate to continue governing, ensuring that six different courts rejected the process.

Maduro has also refused to recognise a symbolic “political trial” of the president that Congress has promised to hold in the absence of an impeachment trial.

In her most recent article about the government's decision, Venezuelan Global Voices author Marianne Díaz explains:

In the context of social, political and economic crisis, with the highest violence and inflation rates in the world (it is predicted that inflation will close out the year at 500%), and against a backdrop of grave and complex food and medicine shortages, for many Venezuelans a recall referendum was the only path that would allow the country to recover its lost institutional structures and create a governance pact.

An announcement made by the Democratic Unity Roundtable or MUD (a coalition bringing together parties and politicians opposed to the ruling party) urged demonstrators to join a rally on October 27 in support of Congress, to take part in a 12-hour strike the following day, and to march on Miraflores palace – the seat of the Venezuelan government — on November 3.

#LlegóLaHora [It's time] Venezuela: tomorrow @AsambleaVE [National Assembly], Friday national civic strike and #3N [3 November] everybody to Caracas for the march on Miraflores. Spread the word!

.@MariaCorinaYA with @soyfdelrincon “Tomorrow we will be on the streets accompanying the #AN [National Assembly] for the dismissal of @NicolasMaduro“

“The Taking of Venezuela”

The first of the protests under “The Taking of Venezuela” slogan took place on Wednesday, October 26.

Images shared in real time from the marches showed sizeable participation in different parts of the country and also confrontations between demonstrators, police and the pro-government camp.

Amongst the most shared photos was one of a protester shouting through riot shields: “You're going to kill me because I'm hungry?”

“You're going to kill me because I'm hungry?” is what this Venezuelan man was saying. We're tired. Stop screwing us. #AMirafloresHoy [To Miraflores Today] #LaTomaDeVenezuela [The Taking of Venezuela]

Images of confrontations and reports of abuse and repression spread across Twitter. One of the most shared stories was of police heavy-handedness in the northern city of Maracay. There protesters say they took refuge inside the city's cathedral to escape police and other armed, pro-government groups. Hours later the demonstrators were able to get out to safety, but the protests continued.

In other parts of the country, some demonstrators attempted to stop the advance of police, like this woman in the Andean state of Táchira:

#LaTomaDeVenezuela Women in  #Tachira don't wear skirts because you'd be able to see what many National Guards don't have!

How the dictatorship suppressed the interior of the country.

For many, the presence of large numbers of people on the streets reinforces the legitimacy of the recall request, something government representatives have been attempting to undermine.

As Myteks Media Labs puts it:

Nicolás and Diosdado say that 1% of signatures are false. Here is your recall! On the streets #LaTomaDeVenezuelapic.twitter.com/iojnCb7Kck

Independent media such as Efecto Cocuyo and Prodavinci regularly share information, images and clips that demonstrate the size — and volume — of opposition to the Maduro administration.

The planned strike on October 27, however, attracted smaller numbers. Some Venezuelans told media they were too hungry to participate in a strike that involved not working and not shopping.