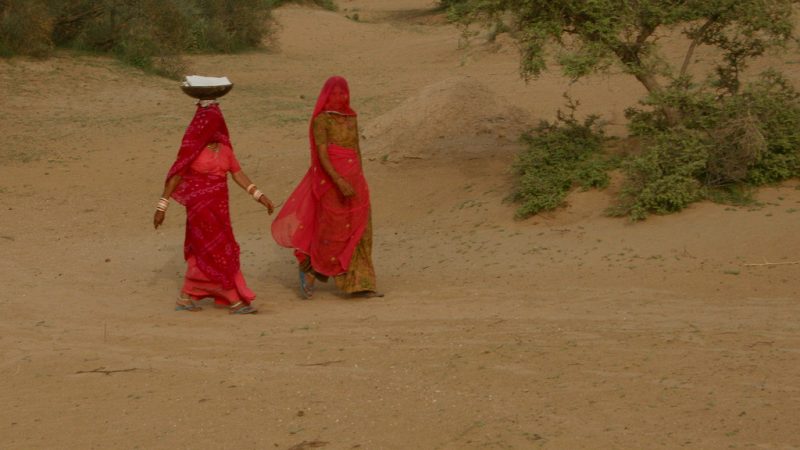 Veiled women going to work in the Thar desert, Northern India. Image from Flickr by Nagarjun Kandukuru. CC BY 2.0

The practice of women wearing full face veils in northern India is not a trademark of any particular religion. In much of the region, particularly in rural areas, Hindu, Jain, Sikh and Muslim women, especially those who are married, are forced to observe the ritual of veiling the body. A ghoonghat (also called a laaj, chunni or odhni) is one such veil or headscarf that they cover their faces with.

It is greatly debated how this practice evolved to be in this particular region, but what is certain is that the veiling tradition has been in India for centuries. Throughout history more and more women have started to ditch the covering. However, in rural areas and some parts of urban centers, it still prevails.

My “highly educated” in-laws made me wear “the veil” post marriage!!! #marriednotbranded #topplepatriarchyhttps://t.co/mSU9oXSvzw

Manju Yadav, a teacher from Mirzapur in Faridabad, Haryana, has started a campaign to help stop women from covering their whole faces. Her campaign has picked up and spread to 47 villages. The video below by Keep Trending news explains:

The video explains how the practice of ghoonghat is considered a sign of modesty and respect by some villagers. They say that it is important to cover women's faces to show respect for men.

Chander Shekhar, the deputy commissioner from the local administration, has supported the campaign, saying that the practice of ghoonghat affects women's self-respect.

For her part, Yadav says men ask women to cover their faces to keep them under control. “Ask a man to cover his face for a day, he will not be able to do it,” she says.

Forty-seven female village self-government heads (sarpanch) from Faridabad district took an oath in July to free their villages from the practice of ghoonghat.

Many Indians have reacted to this news. Chanchal Mishra wrote on Facebook:

[I]n the name of culture and tradition many such hypocrisy has been practiced for ages now. I was wondering why is the list for men missing when we are blessed to have such long list of illogical customs for women.

In a comment on BBC India's page, Ash Chowdhury explained the practice in further detail: