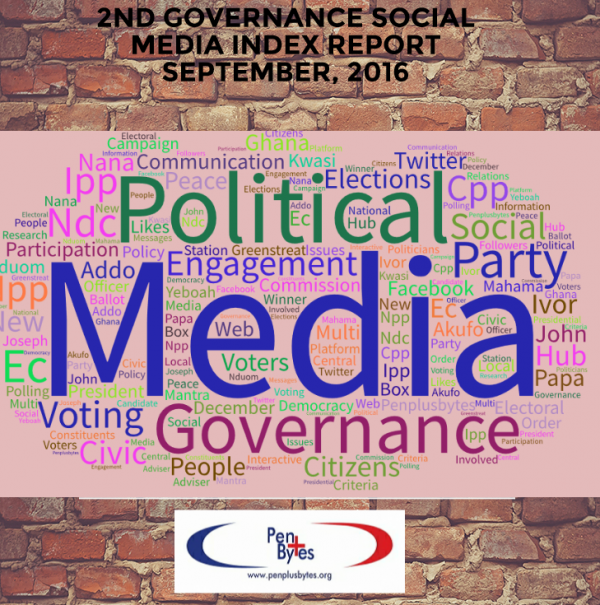 The cover page of the Governance Social Media Index.

Penplusbytes has released the second edition of the Governance Social Media Index (GSMI) report, which assesses and ranks the presence of political parties, political party leaders and key election management bodies in Ghana on social media based on their followers and level of engagement on Facebook and Twitter.

Generally, the report shows that political actors in Ghana have increased their use of social media ahead of the 2016 general elections.

The flurry of politically minded social media activity hadn't gone unnoticed, even before Penplusbytes's report. Ghana's Inspector General of Police John Kudalor hinted in May 2016 that Ghanaian authorities might consider shutting down social media platforms during the December 7 elections to “maintain peace”.

Following a public debate among major stakeholders after his statement, Ghanaian President John Dramani Mahama declared on August 14 that “the government has no intention to shut down social media on election day.”

The Governance Social Media Index tracks the relevance and effective use of social media in governance. The first index report was published in June 2016.

The second edition of the GSMI was compiled on September 30 after the disqualification of 13 presidential candidates from the 2016 general elections by the Electoral Commission of Ghana. These candidates were included in the report because they were part of the first GSMI.

The report shows that President Mahama is ahead of other presidential candidates on Facebook with 1,007,595 likes — 125,171 more than his June figure of 880,620. Nana Akufo-Addo, the leader of the largest opposition party, New Patriotic Party, comes in at 981,057 likes on Facebook, which represents an increase of 265,341.

When it comes to Twitter, the report shows that Akufo Addo has taken better advantage of the platform to communicate and interact with his followers, as evidenced in his over 4,000 tweets as compared with President Mahama’s 842 tweets.

In terms of political parties, the New Patriotic Party continues to lead with a whopping 307,963 likes on Facebook. Then comes the Progressive People's Party with 33,193 followers, which beats out the ruling National Democratic Congress, who have 24,743 likes on Facebook.