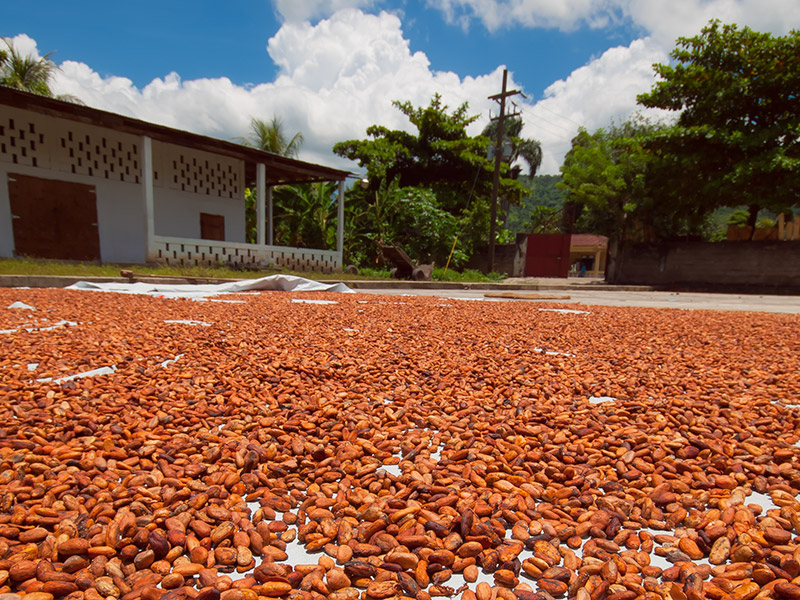 This post by Meg Wilcox was originally published on Ensia.com, a magazine that highlights international environmental solutions in action, and is republished here as part of a content-sharing agreement.

When a tiny Quebec chocolate maker won a gold prize at this year’s premier International Chocolate Awards for a bar made with Haitian cocoa beans, it rocked the specialty chocolate world. The cocoa beans had been on the market for less than a year, and a Haitian chocolate bar had never before received the award.

Haiti produces less than 1 percent of the world’s cocoa. But today, cocoa industry players are aiming to put the Caribbean nation on the craft quality chocolate map, while providing some of the world’s poorest farmers with a better life and stemming the forces that have left Haiti a near moonscape. Stunningly 98 percent deforested, Haiti is an environmental mess, vulnerable to devastating floods and mudslides.

Efforts to connect poor cocoa farmers in Haiti to consumers willing to pay upwards of US$8 for a single chocolate bar are part of a much broader movement within the development community to combat global poverty and protect natural resources through access to such specialty markets.

But can these efforts make a difference in tackling some of the key drivers of environmental degradation? And can they do it at a scale that actually transforms struggling rural economies?

Grinding poverty is a root cause for Haiti’s deforestation. Per capita income was just US$828 in 2015, and two-thirds of Haitians are subsistence farmers. The vast majority cook their food with wood charcoal. Charcoal production fuels deforestation, which leads to soil erosion, loss of productive agricultural land, and a vicious cycle of poverty.

An estimated 50 percent of Haitian topsoil has washed away, destroying Haiti’s farmland and contributing to crop losses that reached 70 percent in some places in the face of extreme drought this year.

Cocoa is a tree crop that grows well in agroforestry systems, which is why Ralph Denize of FOMIN (Multilateral Investment Fund) says, “Cocoa is one of the best crops you can use for reforesting the country.”

“As long as the market is stable and farmers can depend on it, those trees will be in the ground for at least 40 years,” adds Emily Stone, founder of Uncommon Cacao.

Currently, some 20,000 smallholder farmers harvest cocoa as a cash crop in what they call “creole gardens” in two regions of Haiti. But, “garden” is a misnomer, because these dense tangles of vegetation, averaging an acre (half a hectare) in size, form mini-forests. Larger coconut, breadfruit, mango, and avocado trees tower over and offer shade to the smaller cocoa trees, as well as food for the farmers and habitat for birds and other animals.

Cocoa farms are in fact one of the few places in Haiti with standing trees, according to Patrick Dessources from Root Capital, which finances small agricultural businesses and is partnering with FOMIN and other groups to rebuild Haiti’s cocoa industry.

Revitalizing Haiti’s cocoa industry can help reforest the country, but key to that revitalization is building capacity for producing the high-quality fermented cocoa beans that are used by specialty and dark chocolate manufacturers, like Palette de Bine, the award winner. Those beans fetch higher prices that help farmers live better.

As Denize puts it, “moving from unfermented to fermented cocoa is about keeping the value added in the country.” 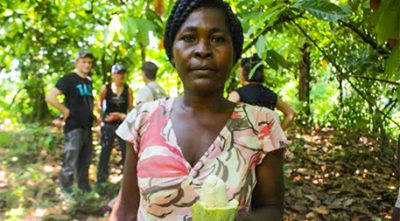 Merviel Chilmise is a cocoa farmer in northern Haiti who sells to PISA, a fermentation facility that produced cocoa beans that went into a chocolate bar that won a gold prize at the 2016 International Chocolate Awards. Photo by Meg Wilcox

Currently, more than 90 percent of Haiti’s cocoa beans are sold and exported in their raw, unprocessed state for mass-produced chocolate because farmers have few options for fermenting their beans. Currently there are only three fermentation facilities in the country.

One of those facilities is operated by Produits de Iles S.A, or PISA, which produced the fermented beans for Palette de Bine’s winning chocolate bar. PISA sources cocoa beans from 1,500 small, family-run farms spread across the foothills of the Massif de Nord mountain range.

PISA pays farmers double the price they would receive for raw beans. That motivates them to protect their trees from the charcoal market. Pierre Daniel Phelizor, for example, a cocoa farmer of 15 years, says he’s “doing real business” with his trees now that he sells to PISA. What’s more, Phelizor runs a small nursery, selling cocoa, breadnut and mango trees to other cocoa farmers.

One of PISA’s main buyers is Taza Chocolate. The first U.S. specialty chocolate maker to enter Haiti, it did so not out of altruism, but for the quality of Haitian cocoa. “We know we have a good product — ancient variety, good terroir, organic by default,” says Taza’s sourcing manager, Jesse Last. “People will fall in love with the taste, and we hope that Haiti will benefit as it gains recognition as a source for fine-quality cacao.” Taza is partnering with Whole Foods to market the bar, which it began producing this year.

PISA needs more buyers like Taza to grow its business and expand its environmental and social impact. Gilbert Gonzales, the Haitian entrepreneur who founded PISA four years ago as a subsidiary of the Haitian agro-industrial corporation REBO, estimates that PISA’s exports will reach 160 metric tons (176 tons) this year, a sliver of the country’s capacity.

Globally, the specialty chocolate market accounts for less than 1 percent of the estimated US$98.3 billion chocolate industry, according to Stone. Tiny, but growing. Uncommon Cacao, for example, has grown from selling 6 metric tons (7 tons) from one country in 2011 to over 200 metric tons (220 tons) from five countries in 2016, and from just two buyers in 2011 to over 90 in 2016.

The fund is helping to finance a major reforestation project in Guatemala that aims to plant 5 million trees — citrus, coffee, cardamom, and cocoa among them — over 4,000 hectares (10,000 acres). The project aims to sequester 2 million metric tons (2.2 million tons) of carbon dioxide and provide sustainable livelihoods for smallholder farmers.

Pur Projet in Peru offers another model. Started in 2008 by one of the founders of Alter Eco, the initiative is working to restore one of the most deforested regions of Peru in the heart of the Andean Amazon. Nearly 10,000 small-scale coffee and cocoa farmers spread across 21 communities are involved in the project, which has now reforested close to 1 million acres (close to 400,000 hectares) — an area larger than the state of Rhode Island.

Pur Projet is verified by both Verified Carbon Standard and the Climate, Community & Biodiversity Alliance standards for the carbon offset market. Project partners are in the process of registering close to 5 million acres (2 million hectares) of land, including both the reforested area and surrounding forest, as a Biosphere Reserve at UNESCO World Heritage. Registering the land with UNESCO will help protect the forest from development pressures and ensure that it remains a carbon sink.

Currently there are few such initiatives, says Teague, because “carbon markets are seen as unreliable.” However, several major land restoration initiatives that view agroforestry as a prime solution have been gaining traction since COP 21. Initiative 20×20, for example, aims to reforest 20 million hectares (50 million acres) of degraded land in Latin America by 2020, and is a looking at agroforestry as one key approach.

Juan Mejia, co-director of Death by a Thousand Cuts, a 2016 documentary on a brutal murder related to Haiti’s charcoal trade, says that’s the approach the government of the Dominican Republic took in the 1960s and ’70s, and Haiti could do the same thing. But, he says, “the government needs to be brought into a comprehensive plan. It can’t be a bunch of aid groups working separately.”

Ultimately, Haitians need economic opportunities. “No one wants to do the charcoal trade,” says Mejia. “It’s grueling work and for very little pay. People will tell you, ‘It’s what you do so as not to steal.’”

“I’m a believer that meaningful market access for sustainable cacao production across the board can change economies,” Stone says. “We’re seeing more and more markets and chocolate makers large and small reimagine how their cacao supply chains work and thinking more deeply about these questions.”

And, adds Teague, “we know agroforestry farms can help mitigate climate change while providing habitat for local biodiversity, conserving the soil and ensuring trees remain part of the landscape. But how can we expect farmers living on less than $2 a day to take on this work all by themselves? As supply chains, as consumers, we need to incentivize sustainable production practices if we want to stop deforestation and address climate change.”

Meg Wilcox is senior manager of communications at Ceres, a nonprofit group mobilizing business and investor leadership on climate change and other global sustainability challenges. She has worked previously in public health and sustainable agriculture in Latin America. Her work has appeared in the Boston Globe, National Geographic Voices, GreenBiz, and New Solutions among other publications.