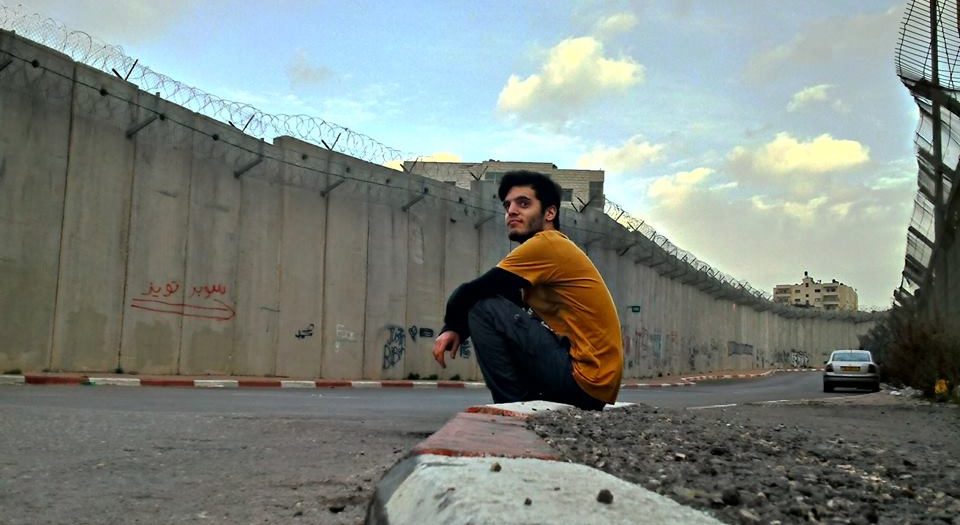 Renen Raz in front of the “Apartheid Wall.” Uploaded by Ronnie Barkan on Facebook. Source.

“I'm a little bit uncomfortable with the thought that these are my last hours on this planet, that I be put to sleep, and some of you my friends will say a final goodbye, for the last time.” These were the words Israeli activist Renen Raz wrote to friend and fellow activist Ronnie Barkan less than a year ago, on December 20, 2015. He was about to undergo a life-saving operation, and decided to reach out to friends and loved ones, in case things went wrong. Less than a year later, this week on October 24, Raz passed away at the age of 28.

Raz had more to say to his friends last year, too:

I know I didn't do much in my 27 years of living, but it was the best I could do, and looking back I am proud of myself. I hope that if it is really my Last Breath I wish it can do more, to people living under a constant fear, and fighting for a better life. For them and their community. For animals and humans as one. I am fascinated by the thought of writing when I know I am taking a risk […] that might be not the best one, but it [is] something [that] need[s] to be done, and I cannot wait. Sitting on a bed which is not my own. And thinking of leaving this world beyond is not a happy place to be in. I am still young, and can offer more to my few friends, and to all the activities in which I take part. If it's the struggle in Palestine, for equality, justice, BDS [Boycott, Divestment, Sanctions]. For my life as LGBT… I never was in love, and maybe only in the very last period of time. I felt part of something, a community, a group of friends, that love care for me, and we respect each other. […] But I feel strong inside of me, just as many other time in my life so far, I am strong because I push myself to be a better man.

Raz's story began as a boy growing up in Kibbutz Dorot near the border with Gaza. He later became an anti-colonial and openly Queer activist. In an interview in 2014, Raz recalled how his upbringing in Dorot affected his politics:

The Kibbutz was surrounded by cactuses, and there were also ruins. Ruins of the ancient Palestinian village that was here, long before Israel was created and Palestinians were expelled. We never talked about that, about Palestinians being here before. When I discovered these ruins for the first time, my questions weren't answered. So I looked for answers on my own, and I understood that we were occupying a country, that the country I live in is built on stolen land!

Raz was a refusenik, a term historically associated with Soviet Jews who were denied permission to emigrate to Israel but which is now associated with Israeli Jews refusing to enlist in the Israeli Defense Forces (IDF) in protest against its role in the Israeli occupation. For example, in 2014 a group of 43 IDF soldiers wrote an open letter to Israeli Prime Minister Benjamin Netanyahu saying they refuse to “serve” in the Occupied Territories. In 2002, 27 reserve pilots published a letter declaring their refusal to fly assassination sorties over Gaza after 14 civilians, including children, were killed. Although the practice is not new in Israel, it is uncommon.

A member of “Boycott From Within,” an Israeli group supporting the Palestinian-led call for Boycott, Divestment, and Sanctions against Israel, and “Anarchists Against the Wall,” Raz organized “apartheid tours” to raise awareness about the occupation. He once wrote an open letter to a theater company planning on performing in Israel, telling them:

I'm writing to you because I'm compelled to act in solidarity with my Palestinian friends, who are living under Israeli occupation and apartheid.

Remember my Palestinian friends who are living under Israeli military occupation will not be able to attend your show because they are not permitted to enter Israel!

Please choose justice for us all. 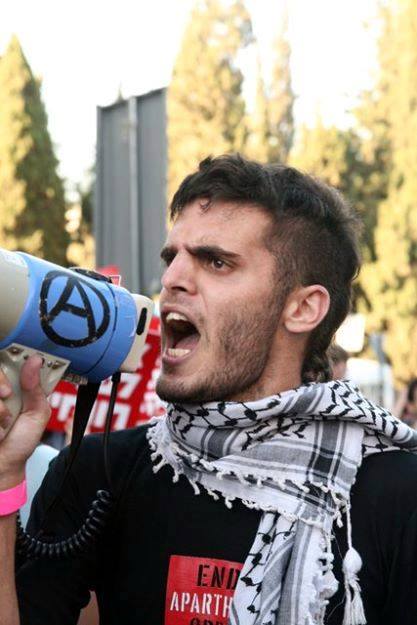 Renen Raz at a protest in Israel-Palestine. Photo uploaded by Ronnie Barkan. Source.

Raz also stood up for LGBTQ rights and was aware of the practices of pinkwashing by the Israeli government. As the group “Queers Undermining Israeli Terrorism” explains: “Pinkwashing is a part of the Brand Israel public relations campaign which attempts to hijack the queer movement to promote ethnic cleansing of the Palestinian people.” This discourse, as Ashley Bohrer, a queer feminist Jewish academic and co-founder of “Jews for Justice in Palestine,” explains “seeks to convince white Americans and Europeans that supporting Israel is an imperative for women, LGBTQ-identified individuals, and their allies.”

In April this year, 972mag reported the following example of pinkwashing:

The LGTBQ community in Israel is threatening to hold a huge demonstration instead of the internationally lauded annual Tel Aviv Pride Parade this year. The bold threat is the result of an announcement that the Tourism Ministry was budgeting NIS 11 million ($2.9 million) to promote the event overseas – 10 times the combined yearly budget of all LGTBQ organizations in Israel.

In January this year, Raz tweeted:

Why most #bds activists are not aware of #pinkwashing #apartheid? #lgbt right are #humanrights

Here is is talking about Pinkwashing with BDS Austria on September 11, 2015.

And here he is speaking about militarism, ultra-nationalism, and homophobia:

As soon as the news of his passing made it to social media, Israeli and Palestinian activists expressed their sympathies to his friends and family and remembered him as a dedicated activist.

The Israeli, Palestinian and international photography collective ActiveStills released a statement observing that “Renen was committed to the struggle against the Israeli occupation, taking a prominent part in the Boycott From Within campaign.” They shared two photos of Raz, one of him being arrested by the IDF during a protest against the occupation the West Bank village of Nabi Saleh in 2011 and another of him taking part in Pride Parade in West Jerusalem in 2010

We are deeply saddened by the loss of activist Renen Raz, who passed away today of illness. Our deepest condolences to his family #AATApic.twitter.com/2JOnDEK38L

Taoufiq Tahani, the president of the Association France Palestine Solidarité, described him as:

A tireless activist, he quickly became an important contact for our missions in Palestine, especially to our young members of AFPS

Renen was a wonderful anti-colonialist, anti-fascist, feminist, vegan, and anti-apartheid activist, despite the illness, he would not remain silent and didn't stop denouncing the atrocities of the zionist occupation. Among many others solidarity activities, Renen joined many of ours too.

The group “One Democratic State,” which advocates for a single-state solution to the Israeli-Palestinian conflict, wrote:

Our comrade Renen Raz passed away today after a long struggle with a difficult disease. His kind heart rebelled against all forms of injustice and violence.

Younes Arar, from Hebron, told his more than 40,000 followers:

RIP Renen Raz, he was a true freedom, peace and justice fighter who dedicated his self for our just cause, you shall be missed and remembered…My deep condolences to his family, 24 October 2016.

Haitham Khatib, a freelance photographer from Ramallah, did the same with his followers:

Rene was above all a kind man and friend and amazing activist who visited Bil'in many times to support our Palestinian freedom struggle! We are so blessed that he joined us and we keep him in our memory and hearts! Bless you Renen! May you find peace, and love and joy in the afterlife!

Rest in peace yaa habibi ,as he used to call me when we meet before the demonstrations against the Israeli occupation .

Yoav Beirach, an Israeli activist and a member of Boycott From Within, wrote:

Remember when we walked along the beach in Tel Aviv and you felt my heavy heart when I looked at the sea and you told me that this sea belonged to all Palestinians and one day we will all be able to see it again together?

Remember when you said you won’t stop until Palestine will be free?

I won’t stop for you.